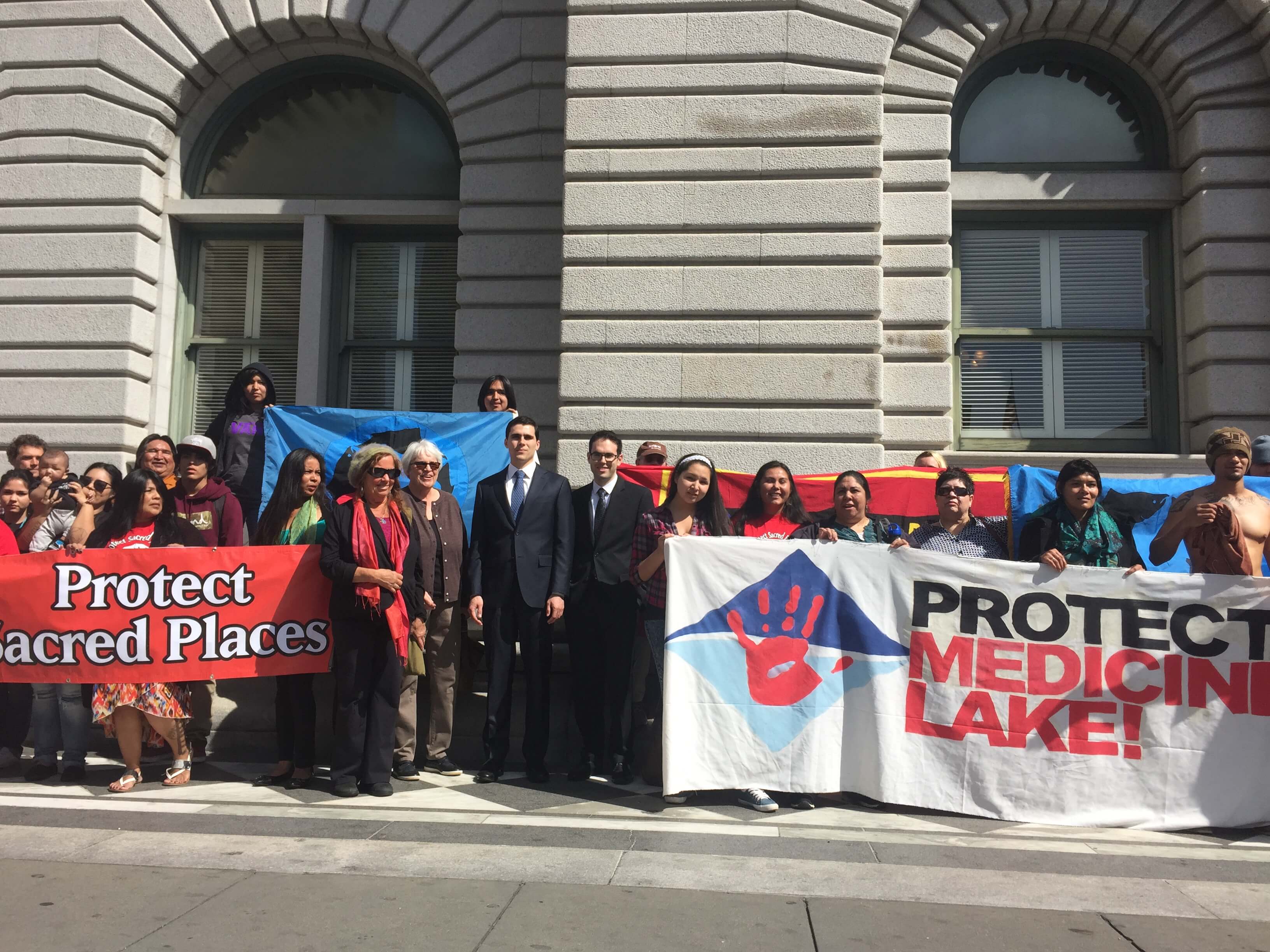 Photo of Medicine Lake defenders in front of courthouse in San Francisco courtesy of the Pit River Tribe (Dan Bacher).
Support our journalism. Become a Patron!

On March 12, the Pit River Tribe and their Native American and environmental allies optimistically left the Ninth Circuit Court of Appeals in San Francisco following oral arguments in their long legal battle to protect the Medicine Lake Highlands from geothermal destruction and desecration.

The Pit River people, the lead defendants in the case, are fighting in court to defend the Highlands, known to them as “Saht Tit Lah.” The Pit River, Wintun, Karuk, Shasta and Modoc Nations hold the Medicine Lake Highlands sacred, and have used the region for healing, religious ceremonies and tribal gatherings for thousands of years.

The Tribe and their supporters appeared at the hearing with their attorney, Deborah A. Sivas, Director of the Stanford Environmental Law Clinic, in the case of the Pit River Tribe vs. US Bureau of Land Management, Department of Interior, Forest Service, Department of Agriculture, & Calpine Corporation, Defendants-Appellees. The Tribe’s supporters included the Native Coalition for Medicine Lake Highlands Defense, Mount Shasta Bioregional Ecology Center, Save Medicine Lake Coalition, and Medicine Lake Citizens for Quality Environment.

“The struggle to protect the sacred Medicine Lake Highlands has been a long one, but over the years, we have only learned more and more about the importance of the landscape to Native Americans and California more generally,” said Deborah Sivas, who represents the Tribe and environmental organizations in the lawsuit. “I was happy to see that the court understood our arguments that the Tribe has a deep, abiding connection to the area.”

“The judges asked really good questions and we are optimistic about the outcome,” said Morning Star Gali, Tribal Historic Preservation Officer for the Pit River Tribe. “At one point Calpine said that nobody had the authority except for themselves to challenge the leases. This showed total disregard for the Tribe’s utilization of the sacred lake and highlands for over 10,000 years.”

Pit River Tribal Chairman Mickey Gemmill said, “Medicine Lake is a sacred place and it needs to be protected at all costs. We’re trying to preserve our culture and Medicine Lake is part of the beginning of our people. If we allow these corporations to come in and frack, we could lose that chance to bring back that part of our culture. So we’re asking the Calpine Corporation to step back and leave the Medicine Lake Highlands alone.”

The event began at 7 am with a sunrise prayer vigil and ceremonial gathering at Yerba Buena Gardens near the courthouse. Gorrina Gould, Ohlone leader, started the vigil with a prayer to welcome people in Yalamu territory. That was followed by a prayer and song by Caleen Sisk, Chief of the Winnemem Wintu Tribe, and Radley and Louise Davis of the Pit River Tribe, according to Gali.

At around 8 am they began a “Protect Water and Sacred Sites, Defend Human Rights March” from Yerba Buena Park to the James R. Browning US Courthouse and then held a rally with speakers and a song by Radley Davis outside the courthouse. The court hearing lasted from 11:30 AM-12:30 PM and was followed by a press conference on the steps of the courthouse immediately after the hearing.

Representatives of Native Nations and environmentalist supporters went before the U.S. Court of Appeals to argue their case that the energy leases were renewed illegally by federal agencies in 1998 for industrial development on national forest lands in the Medicine Lake Highlands, a near-pristine area about 30 miles northeast of Mount Shasta that has been designated a “Native American Traditional Cultural District.”

The Native American and environmental plaintiffs assert that industrial energy development would “desecrate and pollute” the beautiful area and pose unacceptable risks to California’s largest fresh water aquifer. They said that contrary to the National Environmental Policy Act (NEPA) and other laws, the federal agencies never evaluated the threshold question of whether industrial geothermal development is even appropriate for this landscape.

“What was never considered is whether development is even appropriate for the Medicine Lake Highlands in the first place, given the area’s high benefit in holding California’s largest pure underground aquifer,” said Michelle Berditschevsky, senior conservation consultant for the Mount Shasta Bioregional Ecology Center.

Berditschevsky said the panel of three Ninth Circuit judges will take the case under advisement, and a decision can be expected within three to nine months, or perhaps even longer depending on the backlog of cases.

To read her legal commentary, go to: http://mountshastaecology.org/2015/03/12/medicine-lake-commentary/

Medicine Lake is a small high mountain lake, located at an elevation of 6,680 feet, that lies within the Medicine Lake caldera, a depression near the summit of the Medicine Lake volcano. Medicine Lake offers boating, camping, fishing, hiking and swimming and other recreation. It is known for its abundant brook and rainbow trout that anglers pursue with an array of angling methods.

Five new geothermal power plant projects proposed by the Houston-based Calpine Corporation threaten to poison the waters of Medicine Lake, according to the Tribe and their supporters. A report by Dr. Robert Curry, a registered hydro-geologist and professor emeritus at the University of California-Santa Cruz, assessing the potential impacts of geothermal development suggests, “the processes that Calpine were trying to use, required chemicals to try and reach hot rock, as opposed to hot mud…were fairly experimental, probably inefficient, and would without doubt lead to contamination of the water supply.”

The Highlands are home to many unique plant and wildlife species that depend on clean water to survive. “Every day during the summer, bald eagles and osprey can be seen diving into Medicine Lake for fish. Deer pass through the campgrounds and occasionally an elk or black bear can be seen crossing one of the roads leading to the lake,” said Gali.

Jason George, a certified Law student in the Stanford Environmental Law Clinic, noted, “It was great to see such a big turnout by tribe members at the hearing. We were gratified to represent the tribe and fight for the future of the Medicine Lake Highlands in the 9th Circuit.”

As California enters its fourth year of a record drought, the Medicine Lake Highlands hold tremendous and critical value as a water supply to California’s fish, wildlife and people from the summit of the caldera to the San Francisco Bay Delta Estuary.

Gali pointed out how the water from the aquifer travels from Medicine Lake and the Highlands to the Fall River, Pit River, Sacramento River and then finally to the imperiled San Francisco Bay Delta Estuary. “If Calpine is given the green light, this will definitely be a big detriment to the fish and the entire fragile ecosystem,” said Gali.

Caleen Sisk, Chief and Spiritual Leader of the Winnemem Wintu Tribe, commented, “The tribal attorneys did a fine job today. The questions the judge asked Calpine Energy forced their hand, and were quite direct. You know, these courts really weren’t built for us, for native peoples, yet we rely on them when development and economics override Mother Earth.”

“If the Pit River Nation prevails, it will be a win for everyone in California. Somewhere there must be someone who can stand up for Mother Earth. As I took photos today of the children who traveled here with parents, I was praying that this fight would not continue in their lifetime,” added Chief Sisk.

A phone call to a Calpine spokesman regarding their stance on the Tribe’s legal battle to protect Medicine Lake has not been returned.

The case proceeds through the courts as Governor Jerry Brown continues to fast-track his Bay Delta Conservation Plan (BDCP) to build the Peripheral Tunnels, considered by many to be the most environmentally destructive public works project in California history. The $67 billion plan will hasten the extinction of Sacramento River Chinook salmon, Central Valley steelhead, Delta and longfin smelt, green sturgeon and other fish species, while imperiling the salmon and steelhead populations on the Trinity and Klamath rivers.

The court arguments can be found at: www.ca9.uscourts.gov/media/ or www.youtube.com/watch?v=t5ScMDXSVhc