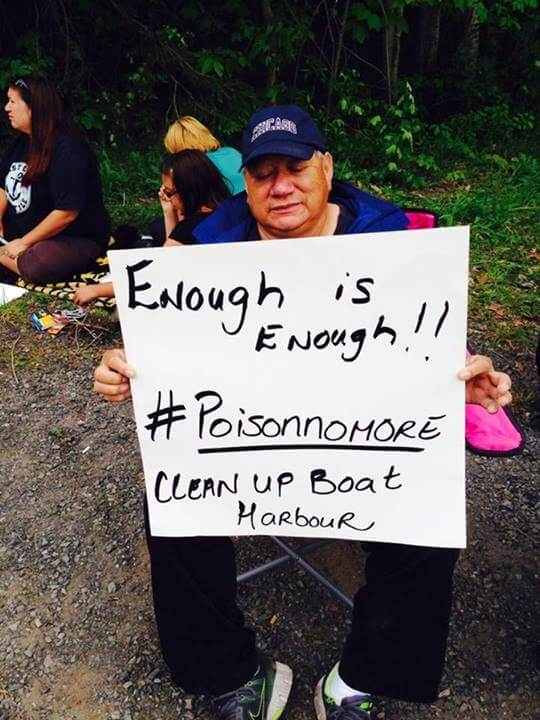 Mi’kmak’i Territory (Nova Scotia) – Jonathan Beadle, member of Pictou Landing First Nation was documenting the major pollution site on his traditional territory around 7:30 pm on June 9, 2014 when discovered that the primary pipeline carrying effluent from Northern Pulp and Paper into Boat Harbour was not operating. This pipeline was built for moving the effluent created by the toxic industrial process of pulping of wood into paper to be dumped untreated into Boat Harbour. Boat Harbour is a historical fishing site to the local First Nations as well as a sacred site due to the proximity of burial grounds located directly under where the mill built the pipeline.

“When we got up to the site yesterday (June 9, 2014) to check on boat harbour, I noticed the mill was not operating at full capacity. My son and I walked in toward Boat Harbour and as soon as we got to the main area where the pipeline comes out into the bay we noticed the effluent pipeline was turned off. This spill had to have been going on for some time. The clean up for the area is going to be incredibly expensive. This situation with Boat Harbour has been going on for a long time, people need to know there is a sacred burial ground underneath were Northern Pulp built their effluent pipe that dumps into Boat Harbour” said Jonathan Beadle, Pictou Landing First Nation member.

Chief Andrea Paul, elected leader of Pictou Landing First Nation reported that she had been in contact with the province and Northern Pulp and inquired about how the spill was to be cleaned up. The Nova Scotia provincial government refused to share this information. Concerned about the disturbance of one of their nations sacred burial sites, her and her elected First Nations government ordered today’s blockade. Both First Nations members and elected council don’t want burial sites disturbed and have asserted that no clean up effort will happen without guarantees on this key concern thru proper consultation channels. She was very clear that todays blockade is a peaceful assertion of sovereignty. In the mean time Northern Pulp and Paper is shut down.

The Northern Pulp Mill has been operating on provincial subsidy for some time and the massive contamination of boat harbour continues uninterrupted because of a short sighted agreement the province of Nova Scotia entered intoduring the by gone era of the boom of Nova Scotia’s logging sector of which they agreed to the liability of clean up in the event of mill closure.

The legacy of this agreement by the province along with years of the pulp and paper mill duping billions of litres of untreated effluent into boat harbour has carried devastating ecological and human health costs burdened by the local Pictou Landing First Nations members who experience the 3rd highest cancer rates per capita in all of Canada’s hundred plus heath districts. This is one of the most blatant examples of environmental racism in Canada to date…more to come.

Get Rid of Ads. Support us on Patreon!
More information
Tag: #PoisonNoMore #CleanUpBoatHarbour

Raw Footage of Northern Pulp and Paper stabilization pond at Boat Harbour Treatment Facility Centre. This is the site of the major pipeline spill of millions of litres of raw effluent from the mill into the open Atlantic Ocean: https://www.facebook.com/photo.php?v=10152444651200708&saved