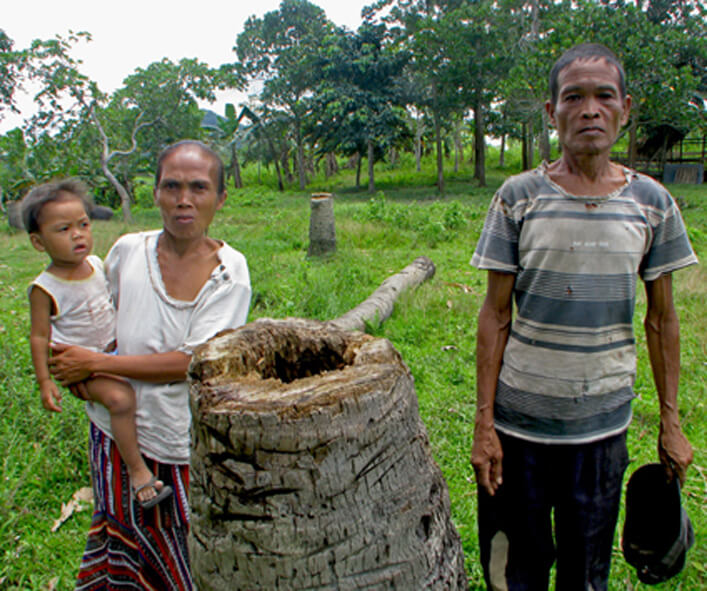 Indigenous Pala’wan losing out their coconuts because of oil palm plantations, Municipality of Espanola
Support our journalism. Become a Patron!

The Coalition Against Land Grabbing

Last week, on Sept. 29, Dennis Socrates, the Vice-Governor of Palawan (Philippines) met a delegation of farmers and indigenous peoples belonging to the recently established Coalition against Land Grabbing (CALG). During the meeting, CALG’s members, accompanied by Bishop Pedro Arrigo from the Apostolic Vicariate of Palawan, delivered a petition–signed by almost 4,300 individuals belonging to oil palm impacted communities who are asking to pass a moratorium on the expansion of oil palm plantations. 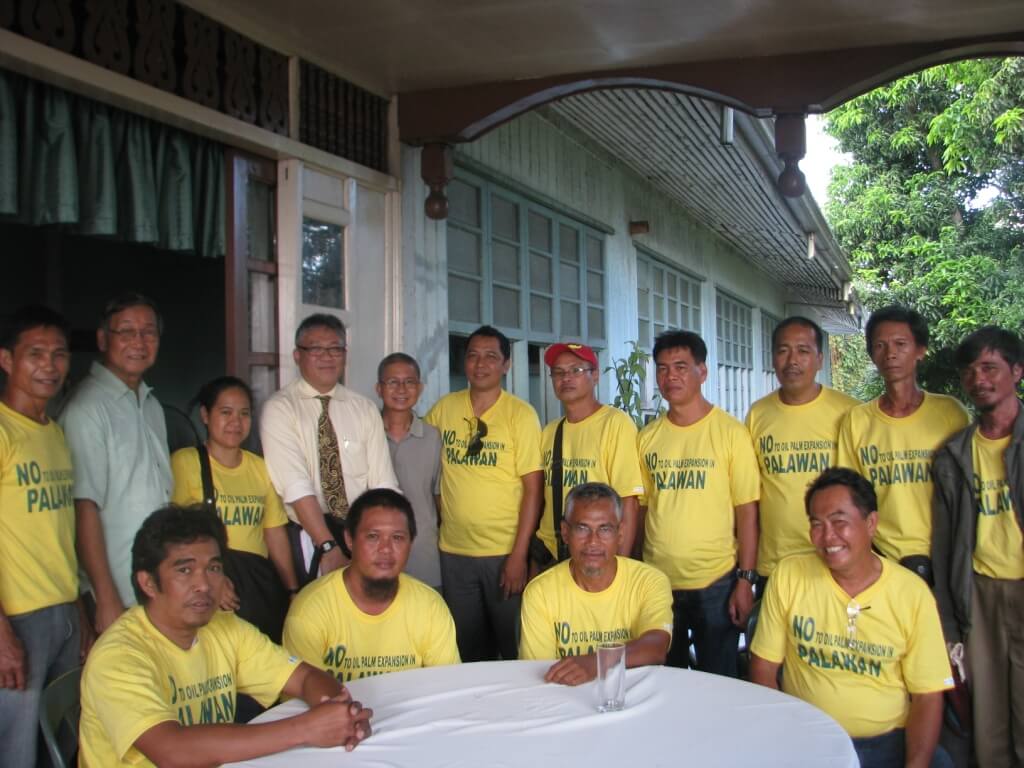 Oil palm development should had never be initiated in Palawan, the last ecological frontier of the Philippines. In fact, in the late eighties, because of its unique biocultural diversity, the whole province was declared by UNESCO a Man and Biosphere Reserve. About two decades later, massive conversion of land into oil palm plantations is endangering biodiversity, water resources, the quality of topsoil and the livelihood of indigenous peoples and traditional farmers, while undermining Palawan local food sovereignty and exacerbating rural poverty. Palawan, in fact, has the last remaining contiguous forest block in the country: oil palm plantations are breaking the contiguity between different and interrelated ecosystems, such as hilly forest, lowland forest, shrub/grassland and wetlands, etc. thus having adverse consequences on animal species that move and thrive in different ecological niches, as well as on the integrity of each specific niche.

Members of indigenous communities in the oil palm impacted municipalities are complaining that common animals have completely disappeared from the impacted areas and the population of birds has dropped dramatically. As revealed by a recent ALDAW (Ancestral Land/Domain Watch) study supported by Non-Timber Forest-Exchange Programme  and Broederlijk Delen, there is also a remarkable decrease of non-timber forest products (NTFPs) which are essential to the livelihood of the local communities. Fresh water resources such as fish, shells and shrimps are fast declining. 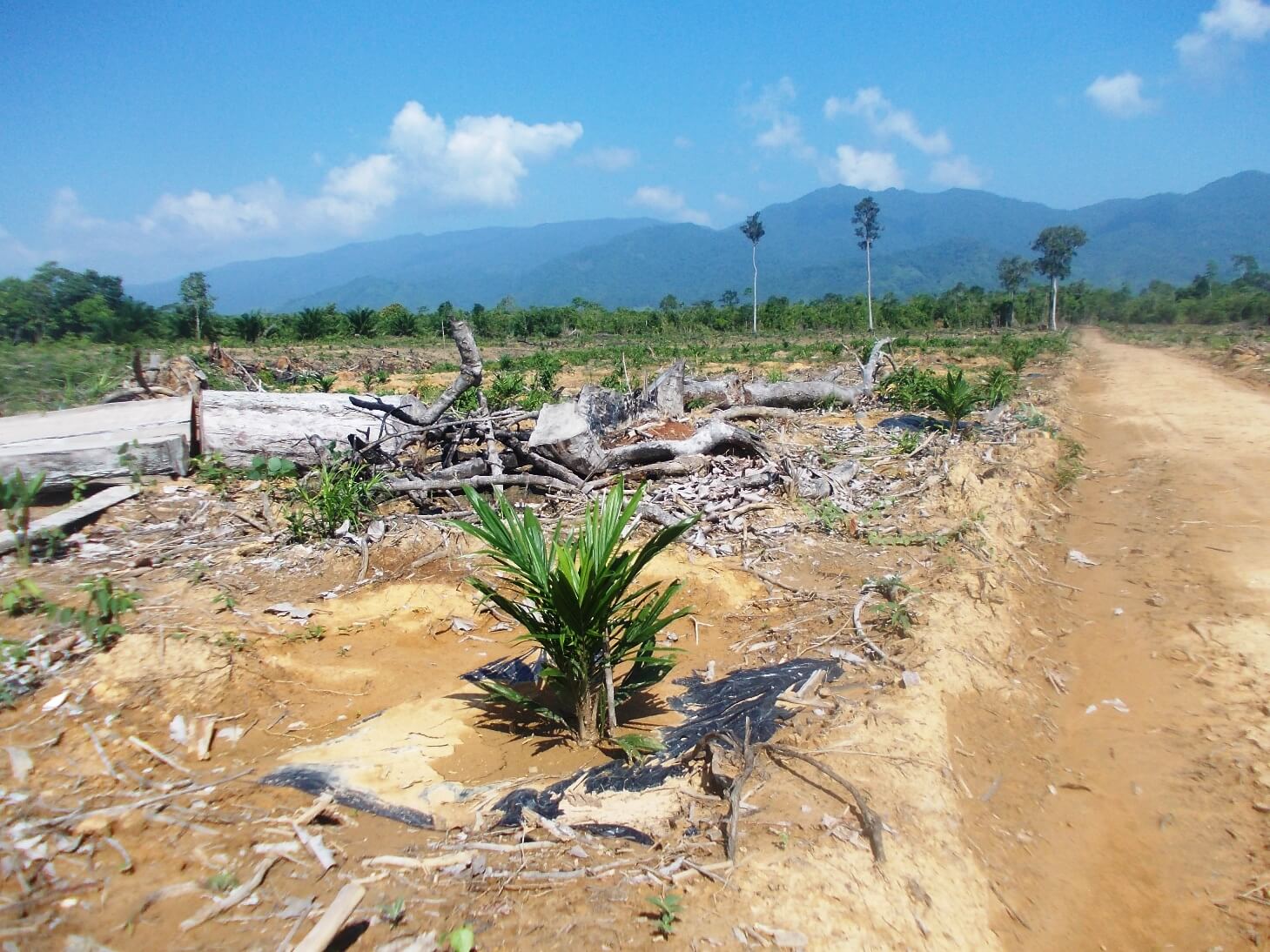 The loss of medicinal plants is also another topic of discussion amongst indigenous communities being affected by oil palm development. Traditional leader, Panglima Kenisio Malasan, from sitio Marebong in barangay Pulot (Municipality of Espanola) speaks passionately about the importance of medicinal plants and their decline: “It is like we are dying little by little because we no longer have the plants needed to cure ourselves […] before we only walked half hour to get the raw material for building our houses, for our artifacts and medicinal plants. Now we have to walk half day to the other side of the mountain before we can find the plants we need”.

Amongst indigenous elders there is a deep concern on whether the coming generations will be able to use and recognize medicinal plants: “We are afraid that the traditional knowledge of medicinal plants will not be passed to the next generation, also because these plants are now located very far from our settlements and it is difficult to bring the children with us when we look for them. Nowadays, our children cannot identify these medicinal plants, because they haven’t had a chance of seeing them,” says Nestor Aplaon a Pala’wan from the same community.

The Philippines is a land and resource rich country, but its government is ‘cash poor’ and this is why it is seeking foreign direct investment in land and agriculture. However, “In the context of weak land governance and insecure land tenure, plans as those suggested by DENR (Department of Environment and Natural Resources) undersecretary Paje to convert 8 millions of Philippines’ land into oil palm plantations are suicidal for our country,” says John Mart Salunday, a community organizer of ALDAW (Ancestral Land/Domain Watch) a local organization that has been at the forefront of the struggle against oil palm development in Palawan.

As it is well known, industrial cultivation of oil palms in Palawan is not for local consumption but for export and it is geared towards quick profits. “What we would need instead,” says CALG’s secretary Welly Mandi, “Are lower risk models of agricultural development that give a greater share of benefits to the poor while improving and fostering the production of endemic crops such as coconuts”.

As far as oil palm development is concerned there are still many questions which need to be answered: What will happen to the future generation of indigenous peoples’ living in oil impacted areas? What will happen to Palawan land after 30 years of oil palm cultivation? Will traditional owners have sufficient resources to rehabilitate soils that have been subjected to heavy chemical fertilization and herbicides? Before all such questions are answered, what needs to take place is a complete stop to all further oil palm expansion and a complete rethinking of government approach towards agricultural development. In this respect, CALG’s presentation of a petition for a moratorium is a remarkable starting point for preventing that more land will be taken away from traditional users, especially indigenous communities.

Indigenous Pala’wan losing out their coconuts because of oil palm plantations, Municipality of Espanola

“Here in Palawan,” says Marivic Bero (CALG’s Secretary General), “We have the best laws in place to protect both the environment and the rights of our indigenous peoples. However, the limits of law lie within the implementation process, wherein rules and regulations are conditioned by the inability of concerned government agencies and their officials to stand by their own mandates”.

Indeed, this gap between law and practice has allowed oil palm plantations to expand in the absence of maps and permits. In a letter dated Aug.15, 2013, the Palawan Provincial Office of the National Commission on Indigenous Peoples (NCIP) ascertained that oil palm plantations overlap with the ancestral domain of Tagbanua and Palawan tribes in at least 16 barangay belonging to five municipalities. Thus, the Agumil oil palm company has been formally requested by NCIP-Palawan to comply with Section 59 Certificate of Precondition of the Indigenous Peoples Rights Act 8371 and to coordinate with NCIP Provincial Office. As of now, not only Agumil has failed to reply to NCIP request, but also NCIP has failed to do any follow up on that initial letter. It must be pointed out that the notion of Free Prior Informed Consent (FPIC) is not only a central component of the IPRA law, but it is also enshrined in the United Nations Declaration on the Rights of Indigenous Peoples (UNDRIP) which sees the Philippine Government amongst one of its state-signatories.

Oil palm development has also deprived migrant farmers of crucial agriculture income.  As Motalib Kemil (CALG’s Chairman) explains, “All benefits of oil palm development are being enjoyed by Agumil Philippines, Inc (AGPI) and its sister company, the Palawan Palm & Vegetable Oil Mills Inc (PPVOMI), while farmers’ cooperatives and small land holders are now on the verge of economic collapse. As far as concerning oil palm development we really need to understand where the risks and benefits lie”. 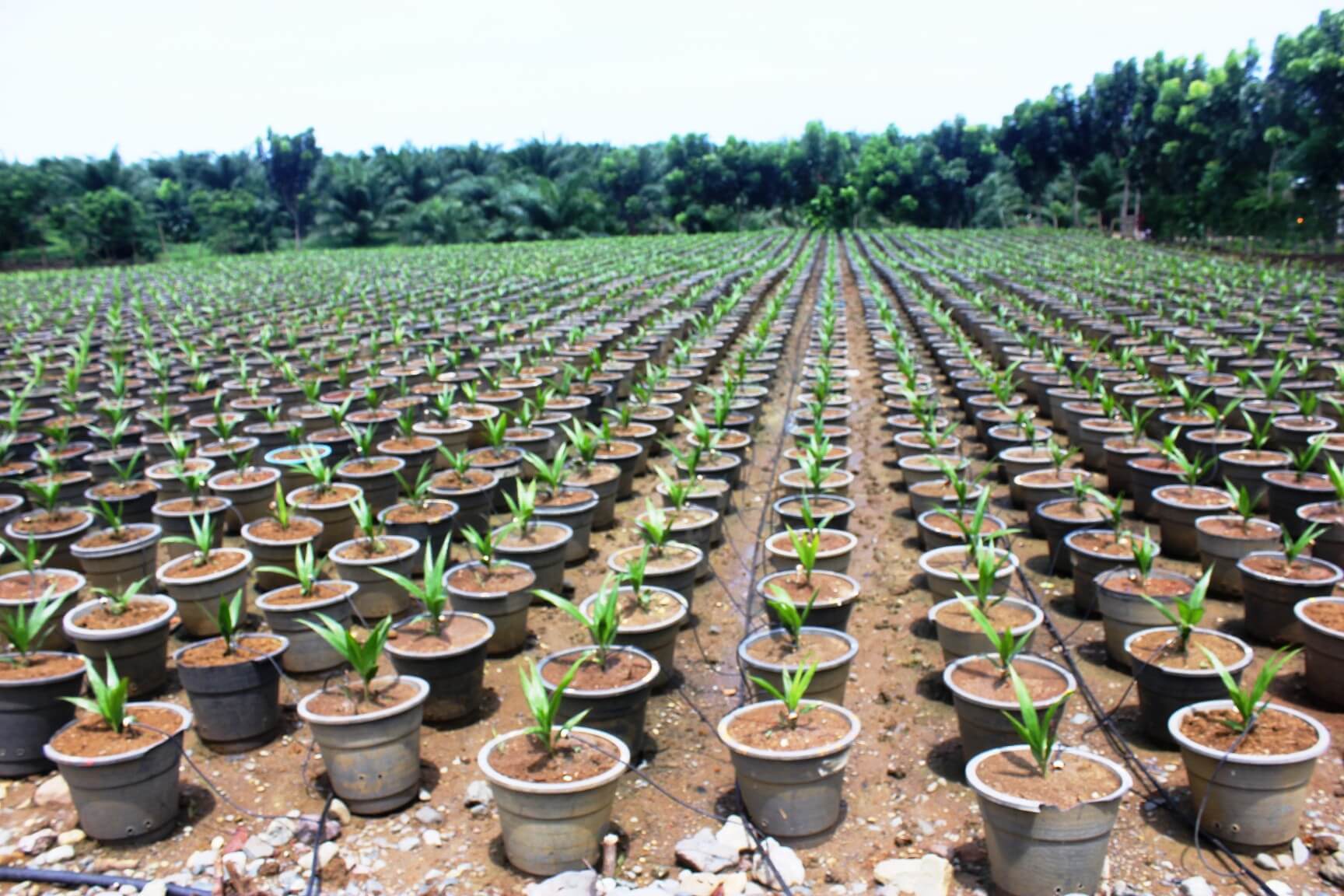 Kemil explains that those bearing the risk of crop failure are the farmers’ cooperatives; they are ultimately blamed by Agumil if plantations do not bear enough fruits. CALG’s Welly Mande speaks passionately on how his people (the Tagbanua and farmers of Barangay Aramaywan, Quezon) were seduced by the “sweet talks” and “empty promises” of Agumil to the extent of entering into memorandum of agreements with them. Such agreements are written in technical English which is incomprehensible to local farmers who signed them mainly on the basis of the optimistic prospect being presented to them by Agumil’s managers (e.g. long term employment and quick economic profits). Such explanations, of course, did not match what the contracts actually stated. “It is clear that Agumil has engaged in deceptive and clearly fraudulent conduct to obtain large tracts of land from local communities in Palawan” says Atty Awat, CALG’s legal councilor.

Aside from Agumil, another agribusiness enterprise known as “Green Power Palawan” (GPP) has gone so far as to promise indigenous communities financial and technical assistance for the demarcation and recognition of their ancestral domains. “Of course these promises had been given only for the purpose of getting people’s consensus about the development of large-scale plantations on their land.” says Motalib Kemil, who joined one of the meetings being organized by GPP. Unofficial sources reveal that GPP works like a sort of middleman: they try to negotiate agreements directly with ancestral land holders and eventually they invite venture groups to occupy and develop these lands with monocrops, such as oil palm, rubber, cacao, etc. “They are trying to convince our indigenous peoples to rent their lands for prices as low as 500 pesos (about 11US$) per year, per hectare! This is unacceptable,” says Kemil.

Environmental plundering by oil palm companies is not only a crime against nature but also a crime against culture, a sort of genocide that annihilates the most profound roots of indigenous societies and ultimately plunders the cultural heritage of the whole nation. Surely, the commitment of Philippine’s government to resolve food security and to safeguard indigenous peoples’ ancestral domains is not compatible with the ongoing attempt of converting precious land into oil palm plantations. The government, then, should respond quickly and responsibly to the petition of indigenous peoples and farmers calling for a provincial moratorium on oil palm expansion, before its adverse socio-ecological implications will become irreversible. 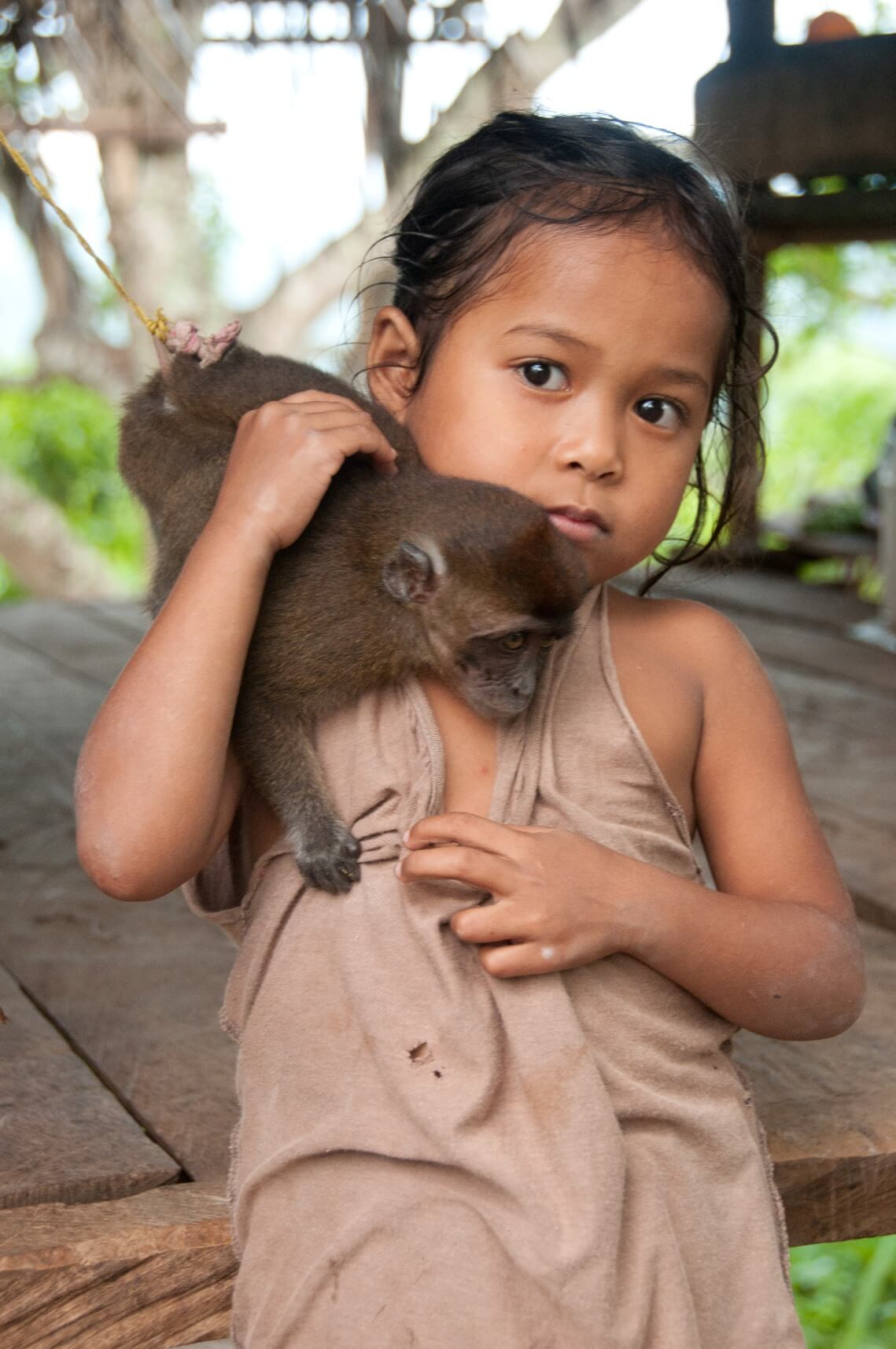 A Pala’wan Indigenous girl from the impacted communities

Write a polite letter addressed to the Governor (Jose Chaves Alvarez ) and Vice Governor (Dennis Socrates) of Palawan, asking to immediately implement a moratorium on oil palm expansion in Palawan.