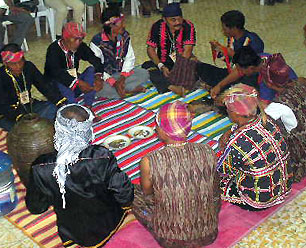 There have been at least two major gatherings this month in the Philippines, where indigenous communities have vowed to protect their rights and defend their lands against resource exploitation.

The first gathering was between Tribal Elders from ten communities in Barangay Gambang, Northern Philippines. The Elders gathered on October 10th, to speak out against an exploration project being pursued in the region by Royalco Philippines Inc.. The elders said that they are vehemently opposed to the project and that, for the sake of future generations, they will not allow the company to destroy their land.

The second gathering took place a few days later in Samaria Cursillo, General Santos City, Mindanao. Bringing together 63 Lumads from six different regions, the gathering focused on Kastifun, a Lumad term for unity, and the defense of their rights as Indigenous People.

After three days of talks, the group officially announced the formation of a new alliance, which they called Kahugpungan sa mga Lumad sa Halayong Habagatang Mindanao or the Federation of Indigenous People in Far South Mindanao (KALUHAMIN). Under this alliance, the Lumad plan to actively oppose large-scale mining and biofuel projects in the region.

In addition to these two gatherings, the National Federation of Indigenous Peoples Organizations in the Philippines, KAMP, has extended a hand of friendship and solidarity with non-indigenous People and the Catholic Church.

We are the indigenous peoples from different tribes and communities in the Philippines. Ours is the united voice for the continued defense of our ancestral lands, and the struggle for our inalienable right to self-determination.

As the world’s multinational corporations, and their local lackeys, race to loot our lands and resources, our kin and children become expelled from the very territories our forefathers bequeathed us with – the same territories that cradled our life ways, worldview, and traditions and beliefs. We have become squatters in our own lands. Our communities continue to be militarized, and our brave brothers and sisters, harassed and summarily killed by State armed forces. Our sacred culture is commercialized. We fall prey to unwarranted discrimination. We are denied or neglected by the State’s basic services.

Undeniably, these are very difficult times for us.

The voices that call for respect for human rights, including the rights to ancestral lands, territories, and resources abound. These come to us as faith, aspirations, and challenges. We continue to be moved by them, and we are impelled to dispel all dissimilarities across tribes and with our non-indigenous brethren to finally work hand-in-hand in a unified action.