This week, the Office of the President of Philippines announced that it is cancelling its Financial and Technical Assistance Agreements (FTAAs) for several mining concessions in Palawan.

The FTAAs were originally signed by the authority of the President of the Philippines on April 12, 2010 and registered with the Department of Environment and Natural Resources on May 31, 2010 to Narra Nickel Mining & Development Corp., Tesoro Mining and Development Inc., and McArthur Nickel Mining. All three companies are affiliates of Canada’s MBMI Resources Inc.

Indigenous Peoples in Palawan, however, aren’t quite ready to celebrate the news, as the ALDAW Network observes in a recent statement:

“These mining corporations have the potential for causing the devastation of precious watersheds, indigenous ancestral territories and productive farm-land in Central/Southern Palawan. Thus, the temptation on our part would be to celebrate this fantastic news right away, and salute Pres. Noynoy for his long-sighted decision. However, past experiences tell as that government announcements of this kind must be read, interpreted and reviewed with extreme caution before assuming that things are really as they appear to look like. So – before ‘full-blast’ celebration, let’s us wait and see first how the President’s ‘decision’ looks like on paper. Indeed, we hope that, soon, the concerned agency will make a copy of FTAA cancellation publically available.”

It also appears that MacroAsia Corporation has “voluntarily given up” its own mining exploration permit in Northern Palawan. Apparently, the company, which holds a concession covering some 4,500 hectares of land, wants to support the government’s plans to turn the region into an eco-tourism hub. However, ALDAW’s equally reluctant to celebrate this news, as well.

“To us [it] looks a bit ‘plastic’ and, perhaps, has more to do with MacroAsia’s attempt to distract national and international attention away from its mining claims held in Southern Palawan which overlap with the Mantalingahan Protected area, with valuable watersheds and with the ancestral domain of Palawan indigenous communities,” ALDAW continues. Some of these IPs are extremely vulnerable having limited contact with the outside world.” 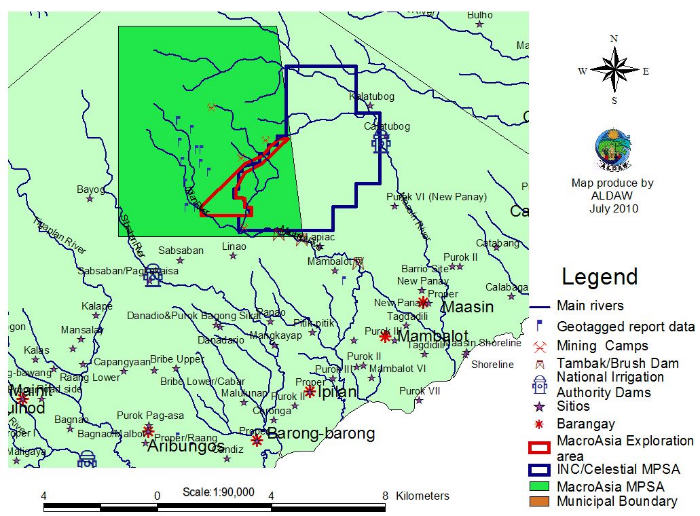 The Ngobe have never given their consent to the Barro Blanco Dam project. Photo by Richard Arghiris.

ALDAW’s reluctance is understandable. As the network points out, despite the promising announcements, “indigenous people in Palawan continue to be the object of military abuse and derogatory prejudices.”

“In the first instance, it would appear that mining companies are spreading the news that the NPA is supporting anti-mining leaders. For the past two months soldiers in full-combat gear, have entered the ancestral domain of the Palawan in the Municipality of Brookes’ Point. Two weeks ago, several indigenous peoples have also been taken to the police station without due process and have been subject to intense investigation. Is it possible that what mining companies are attempting to achieve in Southern Palawan is the militarization of the area where they intend to extract minerals, thus creating a situation of tension/danger that may force local indigenous inhabitants to vacate the area or to give up any resistance to mining.”

At the same time, Indigenous People in Palawan are almost being portrayed by health department officials, almost as ‘dirty animals’ who are “defecating everywhere, and using contaminated water to both wash and as a source of drinking water.”

This vulgar, unproven claim stems from a recent Cholera outbreak in 17 barangays (villages) in Southern Palawan. Between March 1 and April 12, the health department recorded at least 430 cases of severe diarrhea, stomach pains and heavy vomiting which resulted in the deaths of about 20 people, many of them children.

“[The health department’s] allegations are completely misleading in view of the fact that, especially in the uplands, Palawan IPs have a reverential respect for any source of water, to the extent that urinating or defecating in rivers or streams is often perceived as an insult to ‘Ampu’t it Danum’, the mystical entity/ies in charge of water sources,” says ALDAW. “In addition to this, especially the indigenous communities of the hinterlands, compared to other lowland groups, have been less exposed to water-born diseases, exactly because the streams in upland forested areas are generally crystal clean and offer abundant potable water.”

ALDAW is currently preparing an expedition to carry out “audiovisual documentation amongst the IPs impacted by the cholera outbreak, interviewing indigenous inhabitants and trying to establishing the real cause of water contamination.”

If it isn’t Cholera, which is a bacterial infection treatable with oral rehydration, another possible explanation would appear to be arsenic poisoning. Throughout history, Arsenic poisoning has been repeatedly mistaken for Cholera because they share much the same symptoms. Acute cases of arsenic poisoning may include nausea, stomach pain, hair loss, discoloured urine, bloody diarrhea, vomiting, drowsiness, numbness in the extremities; and, in the worst cases, convulsions, comas, and death.

Common sources of Arsenic, beyond what may naturally occur in rivers and streams, include phosphate-fertilizers, agrochemicals and pesticides. It’s also frequently used in the extraction of nickel, which the Rio Tuba Nickel Mining Corporation (RTNMC) has been extracting in Bataraza Municipality for at least 30 years.

On a related but much brighter note, The Save Palawan Movement’s lofty “No to Mining in Palawan” campaign leaped passed one million signatures, making it one of the largest running anti-mining petitions around. The Save Palawan Movement is a multi-sectoral coalition of concerned environmental, legal religious and other civic groups which launched the “No to Mining in Palawan” campaign on February 3rd, 2011. This was in direct response to the killing of Dr. Gerardo “Doc Gerry” Ortega, a civic leader who championed the protection of Palawan and an outspoken critic of mining operations on the Island. As of now, the petition has gathered a total of 1,047,989 signatures. Ultimately, The Save Palawan Movement and it partners hopes to gather “ten million signatures to deliver a strong message to the Philippine and Palawan governments so that they would finally say no to mining in Palawan and help protect one of the Philippines’ last remaining treasures.”

With the recent announcements from the Office of the President of Philippines and MacroAsia Corporation, perhaps that message is already being received.

For more news and updates on indigenous people and mining in Palawan, visit ALDAW’s facebook page at http://www.facebook.com/Aldaw.network.palawan.indigenous.advocacy