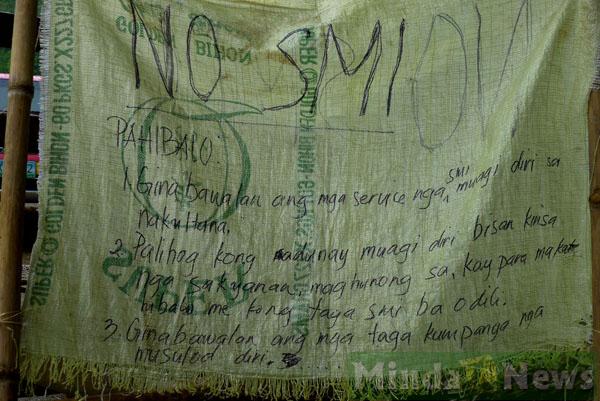 NOT ALLOWED. A notice in sitio Nakultana at Bong Mal District in Barangay Kimlawis in Kiblawan, Davao del Sur states that company vehicles of Sagittarius Mines, Inc. are not allowed passage. Photo by Bong S. Sarmiento/MindaNews
Support our journalism. Become a Patron!

Indigenous Lumad communities in South Cotabato have organized a set of blockades against an Australian-owned mining company that wants to relocate them to make way for a new copper-gold mine project.

A group of journalists were invited by a local Catholic Church this past weekend to sit down with the Lumads and discuss the situation.

Speaking through interpreters, the Lumad explained how Sagittarius Mines Inc. (SMI), an affiliate of Australia’s Xstrata Copper, recently outlined the terms of a proposed relocation project on a bunch of tarpaulins which it posted in the region without telling anyone.

As if that wasn’t bad enough, the terms of the relocation were written in Cebuano, a common language in the Philippines, but which most Lumads can neither read nor write.

As the Lumads later learned, SMI had given them until March 22 to agree to the relocation proposal, which also included compensation for their land and their farms.

“The community was shocked by the relocation notice. I don’t want my family relocated,” said Juli Samling, a Lumad community member.

“Here in our community, everything is almost free. You have a land where you can plant to put food on the table. In the relocation site, you have to pay for everything to sustain the family”, Samling added.

Various allegations have been made that the Catholic Church pushed the Lumads into setting up the blockades; but Samling insists that isn’t the case.

All but one of the protesting communities are opposed to SMI’s Tampakan copper-gold mine. The one that isn’t opposed, simply wants the company to act responsibility.

“We are supportive of the mining project only that we have problems with their commitments. If we can settle it, which should include concerned government and private organizations, then no problem,” said Flao Saluli, the community’s leader.

In that letter, Cuna informed Forrestal that SMI must “refrain from undertaking any development activity in areas mentioned in the application for ECC [Environmental Compliance Certificate] until the same is issued in your favor including permits from concerned government units.”

The Department of Environment and Natural Resources’ (DENR) rejected the company’s application for an ECC earlier that same month.

There is currently a local ban on open-pit mining in South Cotabato.

John Arnaldo, SMI’s corporate communication manager, however, says the company’s not doing anything wrong and that it has properly consulted the Lumad, stating, “This process has been widely appreciated by the respective tribal and barangay council leaders of affected communities, and for them to communicate this to their community members”.

“The company recognizes its obligation to the indigenous peoples and affected communities and we respect their rights.”