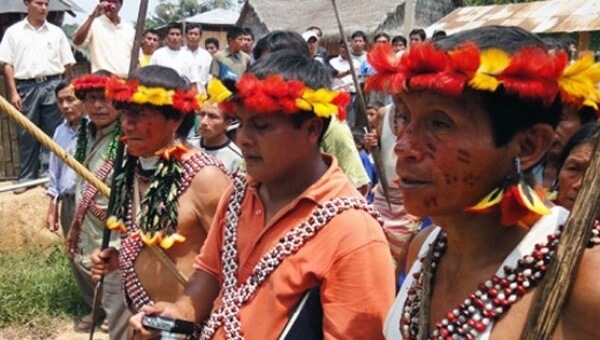 Achuar people living in the remote headwaters of the Amazon are threatened by oil exploration. | Photo: FENAP
Support our journalism. Become a Patron!

Indigenous tribes are willing put their bodies on the line to protect the Amazon from destructive oil drilling.

The Federation of Achuar Indigenous People, or FENAP, warned the Peruvian government that they will physically block any attempt by oil companies to operate on their lands in the Amazon region of that country, local press reported on Friday.

FENAP said the chiefs of 45 Achuar communities that live in an oil-rich area known as Block 64 are all opposed to a recently approved plan for oil drilling in the Peruvian Amazon, which according to them will pollute and destroy their ancestral lands.

“We have healthy rainforest free of pollution, that’s why we don’t want oil companies to come in,” said FENAP president Jeremias Petsein, adding that oil pollution “is a reality in other indigenous communities, it makes people sick and destroys our way of life.”

The green light for a massive operation was given last week by recently elected President Pedro Pablo Kuczynski, who along with transnationals and the state oil company PetroPeru, have developed a massive drilling plan in the area believed to hold about 40 million barrels of oil in proven and probable reserves. PetroPeru’s environmental amd safety record has been a cause for major criticism and concern as the company has had eight oil spills this year alone.

In 2009, confrontations broke out on the Amazonian highway known as the Devil’s Curve near Bagua, 600 miles north of Lima, when more than 2,000 Indigenous people rallied to block in attempts to cut off access to the Amazon jungle for oil and gas companies. Then-president Alan Garcia sent in the military to put down the upsrising, killing at least 32 people, in what came to be known as known as the “Baguazo massacre.

Kuczynski, a former Wall Street banker, has presented a neoliberal policy on the country’s energy resources that includes what he calls a bid to “untangle” stalled investments from red tape.

Protesters have said they have noticed a dramatic increase in the number of dead fish in the river following this year’s spills, and that the impact is particularly noticeable when the rivers swell with rain.

This article was originally published at teleSUR. It has been re-published at IC with permission.