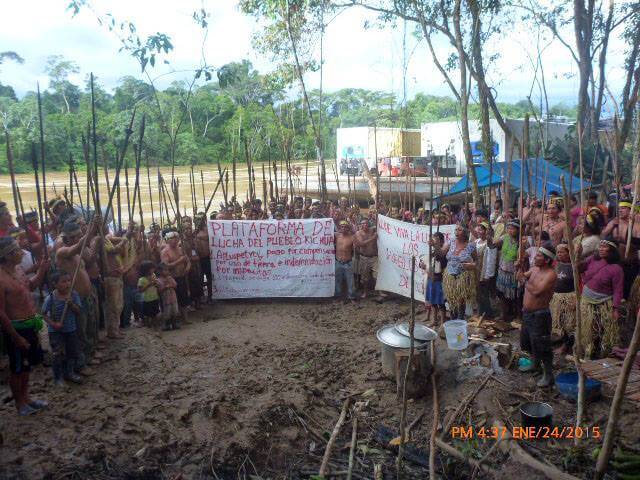 “Platform for the cause of the Kichua people”. Image from the Facebook of Northern Amazon Petroleum Observatory.
Support our journalism. Become a Patron!

A new chapter in the eternal struggle of the Amazonian communities to defend their ancestral lands against oil pollution has opened. In late January, members from the Achuar and Kichwa indigenous communities, from the Corrientes and Tigre rivers basins in the Peruvian Amazon, took the Jibarito base of the Pluspetrol company, paralyzing the production of 14 oil wells, equivalent to a loss of approximately 3,100 barrels per day.

Another protest arose in the Tigre River, where the communities blocked the river as another measure of their indefinite strike, which to date has been going on for more than 30 days. Eight boats were held up in the middle of this blockade. All of these protest actions demand that Pluspetrol pay environmental compensations for the use of land and water in their communities, among other complaints.

These confrontations are taking place ahead of Pluspetrol’s contract with the state for lot 192, at the Jibarito base, expiring in August this year. A prior consultation should take place with the communities before the lot goes up for bid again. Moreover, the issue of land titling, where the Peruvian government refuses to give titles for land with “forestry capability” or for land given to oil companies, adds another level of complexity to the negotiations.

The Consultape blog, specialized in the subject of prior consultation, explains:

This case is emblematic because it was the first lot where the government announced that it would hold a prior consultation in August 2012, because it is a complex case with environmental liabilities that has affected the indigenous communities for over 40 years, and because 11.7% of the domestic crude oil is extracted from this lot. The bidding process for the lot has not yet started, and Pluspetrol’s contract expires in August this year, and by that time, the consultation should have taken place. This is why a source close to the government said that the case is at a critical stage, as the process (a call for prior consultation, organization of the bidding process and agreements that must establish the winning bidder plus formalization of contracts) should last between 20 to 25 months, while the concession expires in seven months. 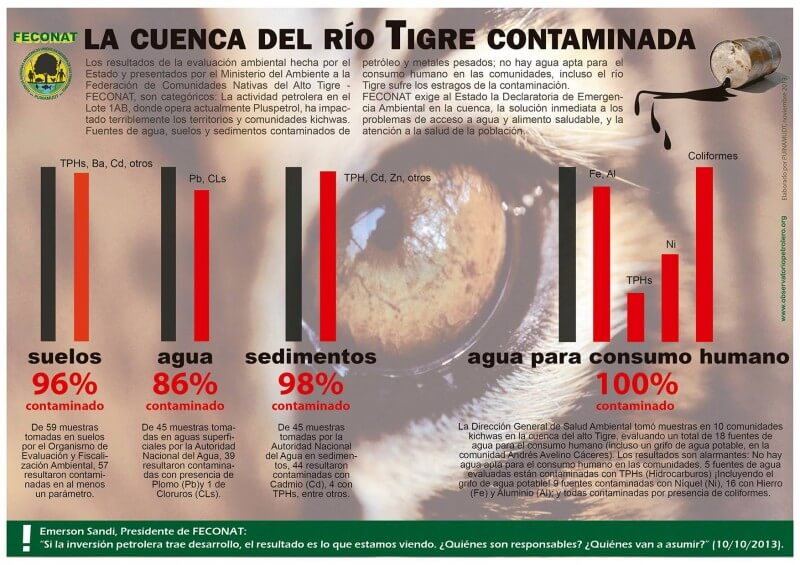 Infographic of Tigre river basin pollution, created by FECONAT, Federation of Native Communities of the Alto Tigre. Image from Facebook of the Northern Amazon Petroleum Observatory.

The government’s attitude to these claims and previous agreements has been ambivalent and slow. In November 2014, it unilaterally suspended a meeting with the indigenous communities in the area, and throughout mid-January it apparently managed at the highest level the development of a proposal for actions designed to address the serious environmental and social problems in the basins of the Pastaza, Corrientes, Tigre, and Marañón, where the lots 1AB and 8 are located. All this has taken place amid rumors of the next call for bidding for the lot 192 without the required prior consultation.

It should also be noted that the indigenous communities have little confidence in Pluspetrol, which systematically seeks to disregard agreements and decisions of both the communities and the state. An example is its policy of challenging the fines imposed for environmental pollution and the implementation of precautionary measures to avoid complying with the abandonment plans and others required by law.

At the request of the Presidency of the Council of Ministers, residents of Pampa Hermosa and Pluspetrol began a dialogue on February 2 at the Dorissa camp, but then the talks broke down. However, Pluspetrol has made a new proposal, which offers the delivery of a fund of 100 million soles (about 32 million US dollars) to the Amazon basins of Tigre, Pastaza and Corrientes.

Meanwhile, the Achuar community of New Jerusalem gave Pluspetrol until February 6 to respond to its request, otherwise they would take forceful measures such as shutting down more oil wells. And the Environmental Defense Front of Pichanki (Junin region) called a strike on February 9 to protest against the proposed installation of Pluspetrol in lot 108.

Another round of talks was scheduled for February 9, this time in the city of Iquitos, after the regional president of Loreto mediated so that forceful measures were suspended for 72 hours and that the boats held up in the Tigre River were freed.

The communities are not radically opposed to oil exploitation. On the NoticiasSER blog, anthropologist Alberto Chirif, who studies the Amazon and its peoples, stated in an interview:

The communities are not saying put an end to oil exploitation, but they are saying that there are problems to be solved, especially the pollution and the need for [economic] development. They are not opposing the development of mining activity.

The following cartoon by illustrator Carlín, posted by Twitter user Renato Pita, considers how Pluspetrol’s attitude is perceived by a large section of the community:

Famous Carlin: illustrating the arrogance and lies of #Pluspetrol: “You guys are off of our influence area, if there is oil floating on the river is not our fault”.