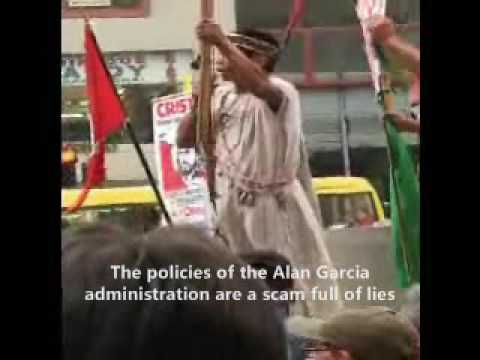 Peru: Voicing the Concerns of the People

Over 10,000 people gathered on the streets of Lima, Peru last Wednesday, May 27, to support the ongoing Mobilization of Indigenous Peoples, which began exactly 52 days ago today.

During the demonstration, an indigenous man took to the podium to voice the concerns of the People.

Elsewhere in Peru this week, “…an estimated 2,500 Wambis and Awajun indigenous people have blockaded a 20-kilometer stretch of the main road to the northern Amazon. In Southern Peru, some 350 indigenous Matsigenka have set up a blockade in the town of Machu Picchu, disrupting service to the country’s top tourist destination,” says Amazon Watch.

Thousands more have also stepped in to the mobilization, which is already backed by more than 1000 indigenous communities.

Ever since the mobilization began, “the government has been aggressively attempting to quell (it) through intimidation tactics and force including deploying the armed forces, declaring a state of emergency and bringing criminal charges against indigenous leaders,” Amazon Watch continues.

But even so, the People have remained committed to repealing those laws, which the government passed without their consent.

Their commitment is working. The constitutional committee of Congress have ruled against two of the laws this month, Decrees 994 and 1090, declaring them both “unconstitutional.”

The commission is scheduled to hand down rulings on eight more of the decrees in the coming weeks.