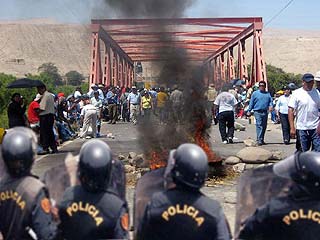 A major protest near the Andean city of Huaraz in the Department of Ancash, Peru, has been temporarily suspended to give the government a chance to establish formal talks with the protesters. The announcement comes just six days after the Peruvian National Police (PNP) opened fire on the protesters, killing one person and seriously injuring four others.

The protest was initially supposed to last for 2 days, however, the PNP intervened during the first day (video) of the peaceful effort, on December 6.

According to the Democractic Underground (DU), “The… protest was called in November after it became apparent that Peru’s Ministry of the Interior would proceed with plans to approve the mining concession of la Minera Chancadora Centauro, a gold mining project that many fear will either lead to the contamination or disappearance of Lake Conococha, the source of the Santa River which is the main water artery for the entire region.”

After allegedly being attacked with “sticks and stones” the PNP began firing at the Campesinos with tear gas and live ammunition. A total of five people were seriously injured in the attack and later sent the hospital. One person, Willy Cadillo Vergara, later died from his injuries. About fifteen police were also injured on December 6.

After the dust settled, the entire local population declared an indefinite strike and set up a blockade on the Pativilca-Huaraz highway which left hundreds of cars, buses and other vehicles stranded. The protesters unanimously demanded a high-level commission over the death of Vergara as well as formal talks over the mining concession which appears to have been issued illegally.

On November 3, reports Servindi, authorities declared Lake Conococha to be a protected zone at a forum “developed in the Congress, [and] attended by mayors and provincial Recuay Bolognesi, representatives of the Forces for the Defence of the Commonwealth of Huambo, among other officials.”

During the forum, Congressman Fred Otárola, the event organizer, said that the necessary environmental impact study was not carried out before the concession was officially authorized. The mining company similarly failed to obtain the required 2/3rds vote from the Assembly of the Huambo Campesino community, whose lands would be directly impacted by the mine.

According to DU, “The project will also be developed inside the borders of the Huascaran national park which according to Peruvian law, is protected from mining development.”

After the blockade was established, on December 8, the government responded in kind by sending 140 members of DINOES to the area. You may recall, DINOES, Peru’s National Police special forces, was at the center of the Bagua conflict in June 2009.

Needless to say, the situation became extremely tense—with the protesters unwilling to accept anything less than the cancellation of the mining concession and a Federal government that seems more interested in lining its own pockets than respecting the rights and the will of local populations. According to DU, Ancash politicians have also been trying to “politicize the crisis for their own political gain” while the national media looked the other way, “[ignoring] the crisis until Friday, the 5th day of the crisis.”

After the coverage starting rolling in, yesterday, December 12, the leaders of the protest decided to “suspend the strike for 5 days to give the government a chance to install a mesa de dialogo [table for dialogue].” However, DU adds, “If the Mesa is not installed after 5 days, the protesters will initiate a new paro [protest]”.