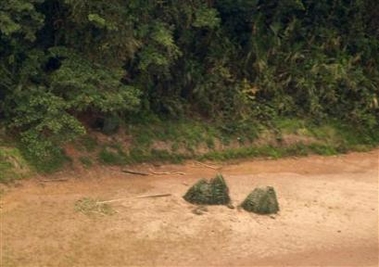 A few months back there was a story about a company that plans to use megaphones if they come across any uncontacted tribes while working in the Peruvian Amazon. Repsol YPF, the company calls itself.

Well, the stage is now set for those indigenous People to be aurally assaulted by megaphones. In December, the government of Peru gave Repsol along with Barrett Resources permission to go ahead with their oil exploration plans. Incidentally, Barrett also plans to contact any people they come across, but rather than use megaphones they’re choosing to give away free trinkets.

The Bane of Ignorance

In all probability, first contact will happen very differently from what these companies envision in their juvenile policies. And no matter their intent, it will be to the detriment of the uncontacted and isolated people.

For one, they will be exposed to foreign diseases (like measles and influenza) to which they have no immunity. There is a long history of indigenous people being nearly or completely wiped-out from such exposure. Survival International points out one case from the 1980s, where 50 percent of the previously uncontacted Nahua were killed after companies moved onto their land to explore for oil. The very same thing happened to the Yanomami, along with so many others around the world.

Another major threat comes from the likelihood that the indigenous people will defend themselves before allowing any outside contact; especially if they come across a bunch of strangers molesting their land… What will the workers and companies do then? Will they obey common sense and leave? After all, it would be their fault for being there in the first place! Having the government of Peru on their side, they’ll most likely go on the offensive… Repsol is particularly notorious for being an aggressive, careless company.

Nathalia Bonilla makes that quite clear in an article published in the World Rainforest Movement’s January 2008 bulletin.

She says Repsol is well known for the “[…] violation of worker’s rights and mass dismissals, contamination at the La Pampila refinery. Under the name of Pluspetrol, it spilt 5,500 barrels of oil from a launch into the River Marañon, in the North Peruvian forest, affecting the Pacaya Samiria Reserve and the Cocamas-Cocamillas people. During the development of the Camisea project complaints were made about aggression towards the Machiguenga community, also affecting indigenous peoples in voluntary isolation, in addition to the Nahua and Kugapakori Reserve, sacred sites such as the Pongo de Mainique canyon and the Community reserve “Pavilk Nikitine” in Vilcabamba (Oilwatch 2002).”

The operations of the two companies also pose a great deal of threat; a fact Nathalia also notes:

[…] Barrett oil company plans to open up 8,000 Km. of seismic lines over a relatively small space, which implies an incredibly intense level, so far unprecedented in the whole Peruvian Amazon. It also plans to establish 5 logistic bases, 61 encampments, 61 heliports and to bring in over 1,000 workers, all this in the heart of the proposed Napo Tigre Territorial Reserve. All this movement, noise, deforestation and destruction will doubtlessly threaten the existence of the indigenous peoples in voluntary isolation, as it implies the possibility of the indigenous people being frightened off by the oil workers from their traditional hunting areas. This forced displacement of the indigenous people in isolation would constitute a violation of their territorial rights, according to articles 16 and 18 of Convention 169 of the International Labour Organization.

It is very obvious that the seismic programme was not designed to take these people into account. The oil exploration phase implies covering the forest with paths to detonate seismic charges over small stretches. “These explorations convert the forest into squared paper, at each of the vertexes they bore a hole and fill it with dynamite. The explosion serves to draw a sort of subsurface scan”… “for the inhabitants of the forest this becomes a sort of cobweb, impossible to avoid.”

No matter how this situation is approached, the outcome does not bode well for the isolated people–a fact that Repsol, Barrett, and the government couldn’t care less about. Instead they use fallacies to justify their ignorance, and then offer asinine contingency plans to force contact and present themselves as kind and benevolent, long lost friends… friends that intend to rob and destroy their house.

Like the man with a smile on his face who calmy thinks about all the ways he could hurt you, if you’d only turn your back on him. Such is the bane of ignorance.

For more news and background on the isolated indigenous People of Peru, please visit this page on Survival International.