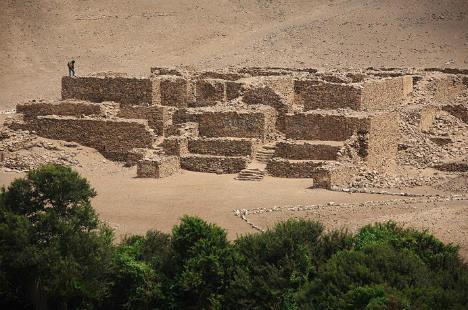 2008 Photo of the Pyramid that was destroyed (CC BY-NC-SA 2.0) By Edgar Asencios on flickr.
Support our journalism. Become a Patron!

On June 30, a demolition crew with rock drills and a backhoe razed a pyramid at El Paraiso archaeological site in the working-class district of San Martin de Porres in Lima, Peru. The pyramid, 2,000 square meters in extension, was won of 12 at site, dating to the Late Pre-Ceramic Age (2000-3000 BCE). Archaeologist Marco Guillén Hugo, in charge of excavations at the site, said he had reason to believe two private contrsuction companies, Compañía y Promotora Provelanz and Alisol SAC Ambas, were behind the destruction. “This isn’t the first time they have tried to take over this land,” Guillén told the daily El Comercio. “They say they are the owners, even though this land is untouchable.” He charged that the companies “have committed irreparable damage to a page of Peruvian history.”

The Ministry of Culture said that although the companies claim to own the land, it is actually under state control.  The vice-minister for Cultural Patrimony, Rafael Varón, added that those involved could face up to 10 years in prison, although he didn’t mention if any arrests had been made. “This is an attack on the cultural patrimony of the nation,” he said, blasting the “attempt of the urbanizers to bury the archaeological zone, ignoring the delimitation and ownership that the state has over these properties.” The mayor of San Martín de Porres, Freddy Ternero, said his municipal district would also impose a fine of 7,000 soles (around $5,000). (BBC News, La Republica, La Republica, Andina, July 3; Peru This Week, El Comercio, July 1)

In April, it was revealed that a limestone quarrying company was operating illegally within the bounds of the famous Nazca Lines archaeological site in southern Ica region, marring some of the enigmatic figures. Heavy machinery damaged 150 meters of lines, completely destroying one 60-meter trapezoid. The more well-known animal figures were not affected. The Nazca Lines are a UNESCO World Heritage Site and one of Peru’s most visited attractions, dating to between 500 BCE and 500 CE. (Gadling, April 11)

We noted that in the recent spectacular archaeological discovery in Huarmey, researchers were in a race with illegal tomb-raiders to reach the burial chamber now dubbed the Temple of the Dead.