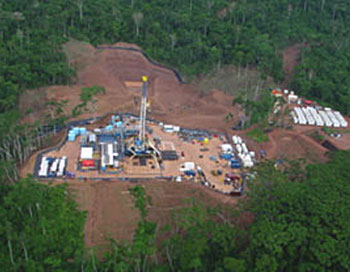 The government of Peru recently announced it will not auction the reserve lands of uncontacted Tribal Peoples for oil exploration.

“The decision represents a U-turn for Perupetro, the state body responsible for negotiating exploration rights,” comments Survival International in a recent press release. “Perupetro spokespeople had previously suggested the uncontacted Indians did not exist, and that exploration in their reserves would be permitted.”

In fact, last year a Perupetro spokesperson compared the Peoples’ to the Loch Ness monster, saying “everyone seems to have seen or heard about uncontacted peoples, but there is no evidence.”

Four months later, in November, President Garcia took on a similar position, basically saying the reward of oil is more important than the ‘potential’ risk of extinction… That is what the people would be facing if Perupetro went ahead and auctioned the lands. From that point on, all it would take is a firm hand shake. Sickness and Death would soon follow.

In any event, a lot of people can now rest easy. The reserve lands are safe. Thank you Perupetro for putting the needs of the People before the want of oil.

“However, part of one of the new concessions, although not a reserve, is inhabited by uncontacted Indians, and elsewhere in Peru oil and gas exploration remains a huge threat. French company Perenco has recently acquired the rights to work in the northern Peruvian Amazon where at least two uncontacted tribes live, and companies Repsol-YPF, Petrolifera and a consortium led by Pluspetrol all work in areas inhabited by the Indians.”

“Survival International’s director, Stephen Corry, said today, ‘Perupetro’s decision is the right one – from both a legal and humanitarian point of view – and we hope this change of heart is permanent. However, there remain other areas inhabited by the Indians where exploration is still going on. These areas must be made off-limits too, and the companies should withdraw in accordance with international law.’”