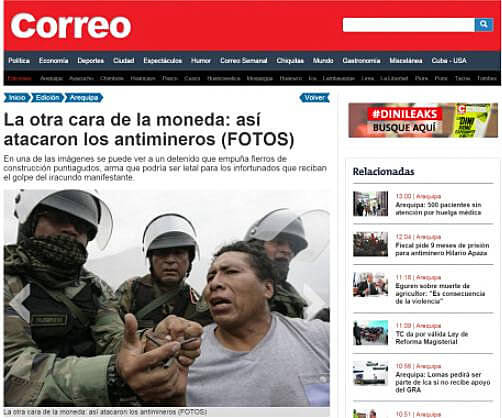 Peru: An “anti-mining terrorist” in the making

A video released yesterday by YouTube channel Mollendinostv shows a protester being dragged by a group of National Police officers.

Another police officer with his face covered goes toward them and places a sharp object in the detainee’s right hand. A photographer capturing the moment is then observed.

The photo, visibly manufactured, was reproduced a few hours later by Diario Correo with the title: “This is how an anti-miner attacks”.

An anonymous chronicler of Diario Correo wrote: “A detainee wields a sharp iron weapon that could be lethal to those receiving the blow of the angry protester”.

Once the fraud was discovered, the news was removed from the Diario Correo’s website.

Minister of the Interior, José Luis Pérez Guadalupe, later said that the police officers who “planted” the weapon on the protester for the photo to be taken will be removed from their positions.

In the end of March of this year, when demonstrations against the Tia Maria project regained strength, Southern Copper’s spokesman in Peru, Julio Morriberon, declared the company was cancelling it because of the ongoing “anti-mining terrorism” in the area.

While the comment was promptly dismissed, the editorial line was already in place.

Since the Tia Maria conflict started there have been dozens, perhaps hundreds of headlines and articles dedicated to instill the idea that anyone opposing the mining project is a terrorist and therefore deserves the public force to fall on them.

It is no secret that Peruvian journalists and mainstream media promote mining and to that end they use a number of communication tools.

In extreme cases they cheat blatantly, playing at par with the private companies and the National Government.

Farmer Victoriano Huayna was killed and 12 others seriously injured this week as police opened fire on a group of farmers protesting against Southern Copper’s plans.

The Tía María project has been stalled since 2011 after three protesters were killed in similar circumstances.

This article was originally published at Servindi.org