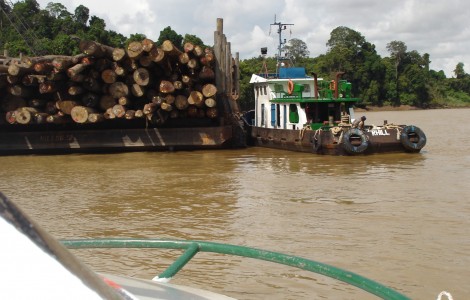 Penan communities from the Middle Baram area of Sarawak (East Malaysia) have mounted a blockade against the logging company Interhill in order to stop them from destroying what remains of the age-old Sarawak rainforest.

The blockade, which was organized after negotiations with Interhill fell apart, is being led jointly “by representatives from the Penan communities of Ba Abang, Long Item, Long Kawi and Long Pakan. A similar blockade was erected by the Middle Baram communities in June 2006 but was dismantled by the police after two weeks,” reports the Bruno Manser Fund (BMF).

“The blockade comes shortly after Penan women launched a cry of alarm to the international community over cases of sexual abuse and violence by logging company workers in their region,” BMF continues.

Malaysian officials have responded to the cry by stating it would be a “waste of time” to investigate, and that the reports are nothing but “lies.”

The blockade also follows an announcement that the government will no longer recognize Penan tribal leaders that attempt to infringe or stop the industry exploitation of their traditional lands.

“The Penan have traditionally been living in Borneo’s rainforest as nomadic hunter-gatherers and have only recently become settled. They still depend to a large extent on the rainforest for their livelihood,” BMF adds.

(please send a copy to info@bmf.ch):

I am writing to express my concern about the recent reports of sexual violence against Penan women in the Baram River region of Sarawak by logging company workers.

I have the firm conviction that these perpetrations are grave human rights violations that cannot be tolerated.

I kindly ask your government (company) to start a thorough enquiry into the issue and to ensure that the victims are protected and that the harrassment of Penan women by logging company workers will come to an end immediately.