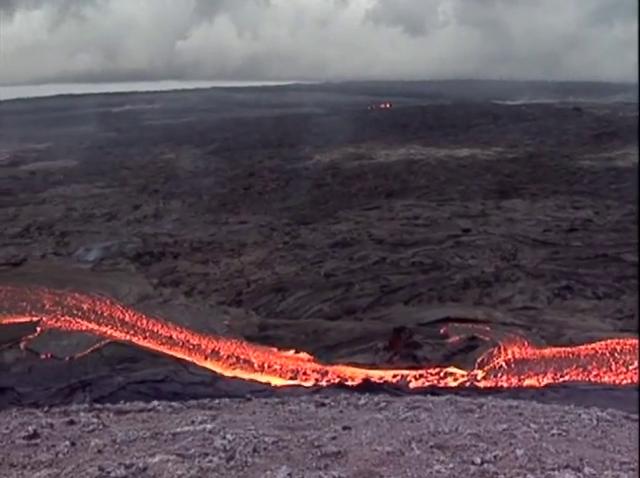 http://www.youtube.com/watch?v=DvZwriPLHtc
Produced and directed by Na Maka o ka ‘Aina, Pele’s Appeal is an award-winning documentary about the risks of geothermal drilling in the Wao Kele o Puna rain forest on the Hawai’i island. Though the film was produced in 1989, the prospect of geothermal development has recently re-emerged (see below).

In the swirling volcanic steam and misty rain forest of Kilauea volcano’s east rift zone on the island of Hawai’i, two forces meet head on. Geothermal development interests, seeking to clear the rain forest for drilling operations, are opposed by native Hawaiians seeking to stop the desecration of the fire goddess, Pele.

Pele is a living deity fundamental to Hawaiian spiritual belief. She is the eruption, with its heat, lava and steam. Her family takes the form of forest plants, animals and other natural forces. But geothermal development interests see Pele as simply a source of electricity.

When Hawaiians take the issue to court, they find that nature-based religions are not respected by U.S. law.

Adding to the issue are environmental concerns over the threat to native species of plants and birds in an island group that is the world capitol for extinct and endangered species.

The fact that the geothermal wells are situated on one of the most geologically unstable areas of the planet leads to safety concerns for the surrounding residential communities.

Thus the stage is set for one of the most controversial issues ever to rock Hawai’i, an eruption exceeded only by that of Pele, who has been dancing on the east rift zone since the controversy began in 1983.

Produced for the Pele Defense Fund as an appeal for help to stop geothermal test drilling in the Wao Kele o Puna rain forest.

The prospects of geothermal development on Hawaii Island has recently re-emerged.

In April, 2012, The Hawaii County Council held a special hearing on geothermal development and expansion on the Island. As reported by Big Island Video News, The event “was billed as an opportunity for the community to participate in the ongoing discussion regarding geothermal development, here in the heart of Puna where the community is most impacted by the geothermal industry. Although it is called a clean, alternative energy by developers, testimony described a different picture.”

You can view that testimony on the Big Island Video News website.

The long-dormant Pele Defense Fund has also come forward once more to educate the public on the risks of geothermal development, to protect the forest, and to encourage worthwhile alternatives.

Occupy Hawaii has an extensive video archive of recent interviews and presentations available.