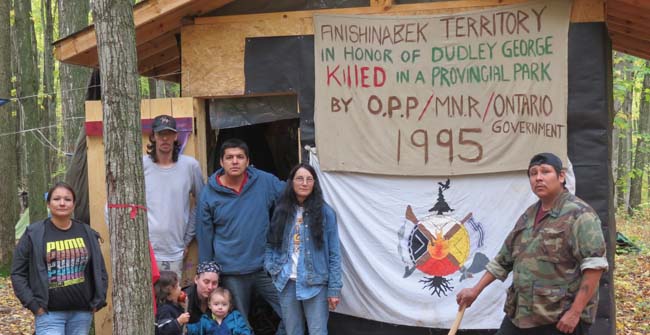 TINY TOWNSHIP – A reclamation of Awenda Provincial Park is in its 19th month and nearby Springwater Provincial Park has also been occupied by members of Beausoleil First Nation.

“We began as a result of the illegal surrenders of our inherent rights and traditional territories along with the policies and laws enforced upon our people where the Chippewa Tri Council and Canada are in breach of the 1764 Niagara Covenant Chain Belt,” says camp spokesperson Kai Kai Kons.

The 1764 Niagara Covenant Chain Belt is a fundamental law of Canada which is an agreement between 24 Indigenous Nations and the Crown that permits the Crown’s presence within Indigenous territories founded on Peace, Non-Interference and Co-existence. First Nations leaders and the Crown gathered in Ottawa to strengthen this Relationship in January 2012.

The reclamation began after the Chippewa Tri Council of Beausoleil, Rama and Georgina Island First Nations accepted a $308-million land claim settlement for the Coldwater Narrows Reserve in 2012.

The Chippewa Tri Council are also signatories to the 1923 Williams Treaty, that involved the surrender of 13 million acres of land and allegedly extinguished First Nation hunting, fishing and harvesting rights within their traditional territories.

“The lands we are reclaiming in both parks are within the 1785 Collins Treaty area which is an area that includes land within the Williams Treaty and Coldwater Narrows Claim,” said Kai Kai Kons. “ The Chippewa Tri Council accepted $500,000 in 1998 when our people were not informed, consulted and provided no consent to accept this settlement.”

Canada’s Aboriginal Affairs Website claims the 1785 Collins Treaty was an agreement whereby the Chippewas of Lake Huron allowed a military road for the Crown through their territory. Lands were to be given back after war efforts but were not, and the $500,000 settlement was reached in 1998.

Beausoleil First Nation says the actions of the camp organizers are not representative of the Band and that they are acting on their own.

“Our title to the lands are influential to our sovereignty and protecting the environment but band councils are extinguishing our rights and their is no avenue other then what we are doing to assert ourselves according to our laws,” says Richard Peters, another member of the reclamation group. “We are organizing at these camps to break free of these band councils in a re-emergence of our own Anishinabek governance and laws.”

Organizers claim the camp in Awenda Provincial Park is situated on one of five traditional embassies known as Council Rock which is interwoven in the inter-tribal treaty between the Anishinabek and Haudenosaunee.

“Our Camp is called the Oshkimaadiziig Unity Camp which refers to our Anishinabek prophecies, where a New People will emerge to pick up the many gifts of the past to ensure survival of humanity,” says Kai Kai Kons. “ We have established a network with other communities and organization for our food security strategy, traditional trade route revitalization project, multimedia youth empowerment workshops and restoring our governance through matriarchy.”

The group claims to be part of a growing movement called ACTION — Anishinabek Confederacy To Invoke Our Nationhood.

To support their actions they have cited the Supreme Court of Canada’s Sundown decision and the Ontario Court of Justice ruling in Meshake, which acknowledge traditional activities within Provincial Parks. Ministry of Natural Resources staff have been attempting to evict the campers.