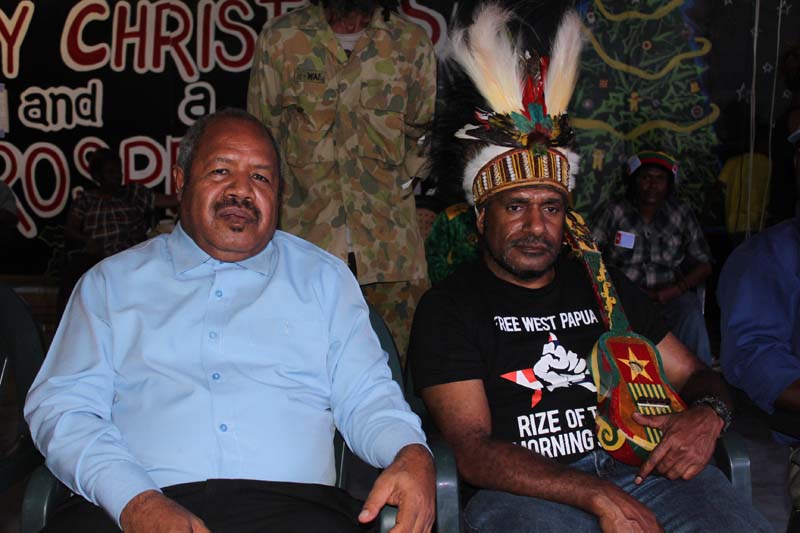 Melanesian support for a free West Papua has always been high. Travel throughout Papua New Guinea you will often hear people say that West Papua and Papua New Guinea is ‘wanpela graun’ – one land – and that West Papuans on the other side of the border are family and kin. In the Solomon Islands, Kanaky, Fiji and especially Vanuatu, people will tell you that “Melanesia is not free until West Papua is free”. This was the promise that the late Father Walter Lini, Vanuatu’s first prime minister made.

Ordinary people in this part of the Pacific are painfully aware that the West Papuan people continue to live under the gun. It is the politicians in Melanesia who have been slow to take up the cause.

But that may be changing.

Last Wednesday 6 March 2013, the Right Honorary Powes Parkop, Governor of National Capital District, Papua New Guinea nailed his colours firmly to the mast. In front of a crowd of 3000 people Governor Parkop insisted that “there is no historical, legal, religious, or moral justification for Indonesia’s occupation of West Papua”. Turning to welcome West Papuan independence leader Benny Wenda, who was in Papua New Guinea as part of a global tour, the Governor told Wenda that while he was in Papua New Guinea “no one will arrest him, no one will stop him, and he can feel free to say what he wanted to say.” These are basic rights denied to West Papuans who continue to be arrested, tortured and killed simply because of the colour of their skin. Governor Parkop, who is a member of the International Parliamentarians for West Papua, which now has representatives in 56 countries, then went on to formerly launch the free West Papua campaign. He promised to open an office, fly the Morning Star flag from City Hall and pledged his support for a Melanesian tour of musicians for a free West Papua.

Governor Parkop is no longer a lone voice in Melanesia calling for change.

Last year Papua New Guinea’s Prime Minister Peter O’Neill broke with tradition and publicly admonished the Indonesian Government’s response to ongoing state violence, human rights violations and failure of governance in West Papua. Moved by 4000 women from the Lutheran Church O’Neill said he will raise human rights concerns in the troubled territory with the Indonesian government. Now Governor Parkop wants to accompany the Prime Minister on his visits to Indonesia “to present his idea to Indonesia on how to solve West Papuan conflict once and for all.” Well known PNG commentator Emmanuel Narakobi remarked on his blog that Parkop’s multi-pronged proposal for how to mobilise public opinion in PNG around West Papua “is perhaps the first time I’ve heard an actual plan on how to tackle this issue (of West Papua)”. On talk back radio Governor Parkop accused Australian Foreign Minister Bob Carr of not taking the issue of West Papua seriously, of “sweeping it under the carpet.”

In Vanuatu, opposition parties, the Malvatumari National Council of Chiefs and the Anglican bishop of Vanuatu, Rev. James Ligo are all urging the current Vanuatu government to change their position on West Papua. Rev. Ligo was at the recent Pacific Council of Churches in Honiara, Solomon Islands, which passed a resolution urging the World Council of Churches to pressure the United Nations to send a monitoring team to Indonesia’s Papua region. “We know that Vanuatu has taken a side-step on that (the west Papua issue) and we know that our government supported Indonesia’s observer status on the MSG, we know that. But again, we also believe that as churches we have the right to advocate and continue to remind our countries and our leaders to be concerned about our West Papuan brothers and sisters who are suffering every day.”

In Kanaky (New Caledonia) and the Solomon Islands West Papua solidarity groups have been set up. Some local parliamentarians have joined the ranks of International Parliamentarians for West Papua. In Fiji church leaders and NGO activists are quietly placing their support behind the cause even while Frank Bainimarama and Fiji’s military government open their arms to closer ties with the Indonesian military. This internationalisation of the West Papua issue is Indonesia’s worst nightmare; it follows the same trajectory as East Timor.

The West Papuans themselves are also organising, not just inside the country where moral outrage against ongoing Indonesian state violence continues to boil, but regionally as well. Prior to Benny Wenda’s visit to Papua New Guinea, Vanuatu based representatives from the West Papua National Coalition for Independence formerly applied for observer status at this year’s Melanesian Spearhead Group meeting due to be held in Noumea, New Caledonia in June, home to another long running Melanesian self-determination struggle. While in Vanuatu Benny Wenda added his support to that move, calling on Papuans from different resistance organisations to back a “shared agenda for freedom”. A decision about whether West Papua will be granted observer status at this year’ MSG meeting will be made soon.

In Australia Bob Carr may be trying to pour cold water on growing public support for a free West Papua but in Melanesia the tide is moving in the opposite direction.