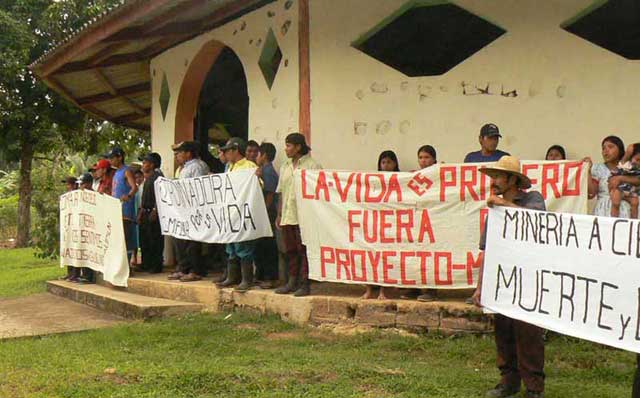 Panama: Campesinos arrested over gold mine

Late last month, a group of demonstrators were violently arrested by police at a roadblock in the northern Panamanian province of Cocle.

The roadblock was first set up on May 9, 2009 to resist the Petaquilla Gold mine project, which is owned by the Panama company Minera Petaquilla, and developed by two others: the Vancouver-based junior company, Petaquilla Minerals and the Toronto-based company, Inmet Mining.

As a many as 24 local communities are opposed to the project because of the “aberrant predation and destruction of the Mesoamerican Biological Corridor, where hundreds of hectares of virgin jungle and forest have been cut down, and where the mountain passes and rivers that made the area one of the most important in the world due to its rich biodiversity have been destroyed and polluted,” notes a May 14 report by La Estrella.

The communities also say “they have never been consulted, but rather deceived, and their lands have been taken from them unfairly in many ways, including the destruction and burning of ranches of indigenous peoples, without even indemnifying the local residents and without any authority of the PRD government fulfilling its constitutional obligation to defend the communities.”

Also reporting on the arrests, La Estrella says 12 demonstrators were arrested in total (other reports say it was 30 demonstrators), “among them the Chiriqui environmentalist Carmencita Tedman. A peasant who did not want to be identified, said that he was really afraid, because policemen were hitting the protestors mercilessly, even women and children. He added that when all this was happening Petaquilla Gold helicopters were surveying the scene.”

The police used rods, and shot pellets and tear gas to subdue the demonstrators.

For background on the Petaquilla Gold mine and local efforts to stop it, visit miningwatch.ca