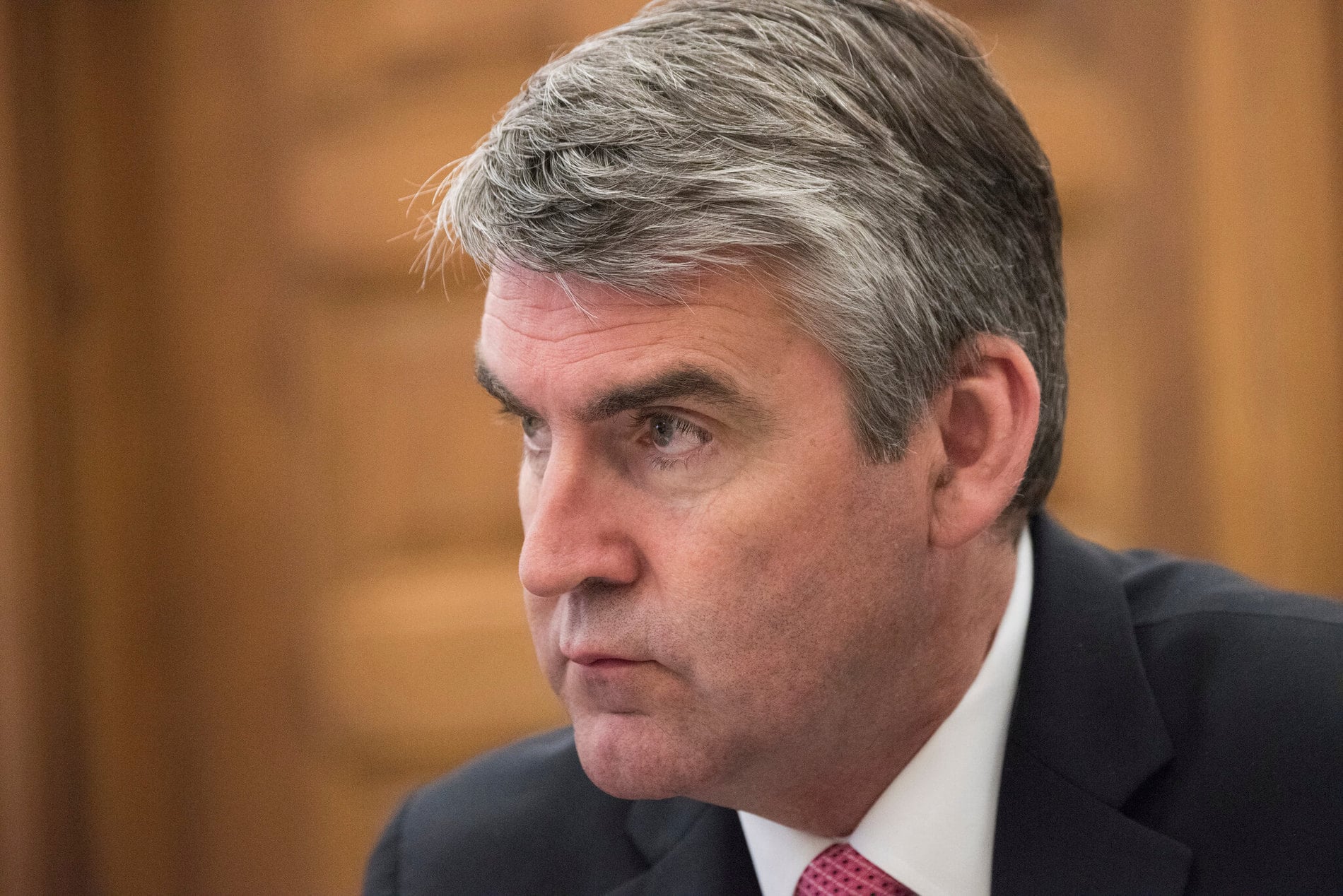 Manitoba Premier Brian Pallister announces the termination of the Turning the Page Agreement.
Support our journalism. Become a Patron!

Winnipeg, MB – On Tuesday, the Pallister Government wrote to the Manitoba Metis Federation (MMF) indicating that it is terminating the Turning the Page Agreement. The Agreement was signed between the MMF, Manitoba, and Manitoba Hydro in 2014. The agreement provided $1 million per year for the next 20 years. This funding was partially to settle long-outstanding claims that the Métis had, related to Keeyask, Bipole, and other Hydro developments. To date, $5 million has been received. The next payment under the Agreement would have been due at the beginning of December for 2018/19. Now that Keeyask and Bipole are built, the province has decided to walk away from an unsettled twenty-year Agreement.

This unilateral action by Manitoba – which was not co-signed by Hydro — is the most recent assault by Premier Pallister against the founders of Manitoba, the Manitoba Métis Community.

“The Turning the Page Agreement represented reconciliation in action in Manitoba,” said MMF President David Chartrand. “It secured the MMF’s support for the Bipole and Keeyask projects, while the Agreement is in place. It also supported investments in our Métis people and our villages. It avoided costly litigation that ratepayers will now have to pay. It set out processes that allowed us to work together as opposed to creating unnecessary and costly confrontations. This is a sad day for reconciliation in this province.”

“Manitoba’s Minister of Crown Services, Colleen Mayer, did not even take the time to ask us how the money was being used,” added Chartrand. “With this money we were repairing churches and arenas, supporting our Métis Elders with programs like the Elder’s Wood Project, supporting our youth (including establishing a youth centre), undertaking cultural celebrations, and providing capital support to our communities. With great pride, we joined with all Manitobans and Canadians to commemorate our Métis Veterans. With money from this agreement we built monuments that honour their service and their ultimate sacrifice.”

The MMF is already in the courts for judicial review of the Pallister Government’s unlawful attempt to cancel a $67.5 million agreement reached between the MMF and Manitoba Hydro in July, 2017. Yesterday’s notice regarding cancellation of the Turning the Page Agreement will lead to future litigation against the Pallister Government, because the Agreement acknowledged outstanding issues and set out a mechanism to address these issues.

“Let me be clear: the final costs to Manitobans and ratepayers will far exceed the short-term political points Premier Pallister is trying to score against the Manitoba Métis,” said Chartrand. “From Pallister’s high-priced Calgary lawyers to the financial damages, we as Manitobans and Manitoba Hydro will be liable for the costs of his vengeful decision. Because of Pallister’s ongoing disregard for Métis rights, future Manitobans will be paying for this Premier’s mistakes long after he is gone.”

“We have a Premier that wants to turn Manitoba into a reconciliation-free zone. His Ministers can’t even say the word ‘reconciliation’ in this province without Indigenous peoples shaking their heads. This is embarrassing for proud Manitobans who believe we need to bring Indigenous and non-Indigenous peoples together, not further apart. Manitobans need to watch what this Premier is up to. This is not just about his vendetta against the Métis people. You need to ask why a Premier who has run businesses demonstrates such little regard for Manitoba Hydro as a Crown Corporation. He is directly interfering in Hydro’s management,” added Chartrand.

“This is politics 101: first attack the Métis to offset the deficit; second, shore up your electoral base by fighting against Indigenous rights; third destabilize the finances of Hydro, a Crown Corporation; and, fourth Bring in new Hydro leadership and board members with privatization agendas. This creates liabilities that will affect Hydro’s financial stability. Why take this risk? Is the province asking Indigenous people to sue?”

For more information on the Turning the Page Agreement and related issues, visit: http://www.mmf.mb.ca/mmf_mbhydro.php

The Manitoba Metis Federation (MMF) is the official democratic and self-governing political representative for the Métis Nation’s Manitoba Métis Community. The Manitoba Métis are Canada’s Negotiating Partner in Confederation and the Founders of the Province of Manitoba.