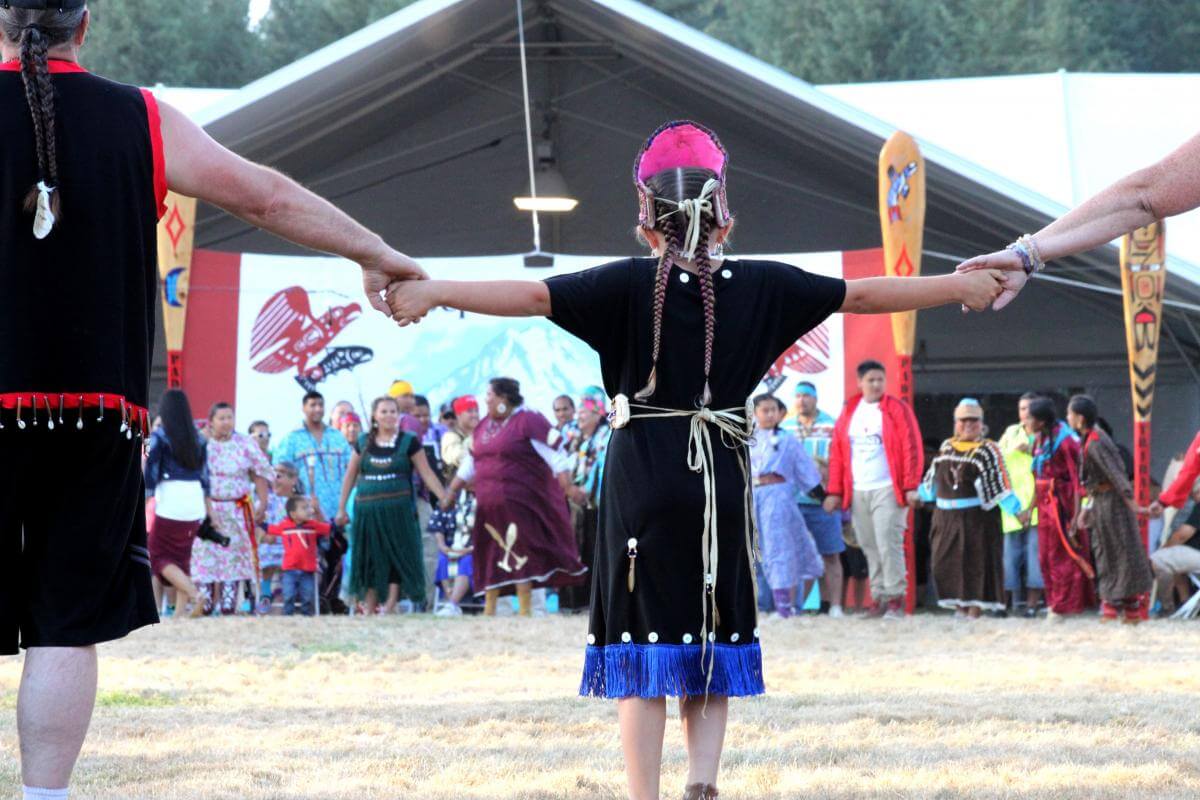 Canoe journey not only showcases skill and strength but also preserves native customs and values
Members of the Confederated Tribes of Warm Springs conduct a traditional dance during their ceremonial protocol at the 2016 Paddle to Nisqually. Photo by G.H. Thorn
Support our journalism. Become a Patron!

On July 30, 20,000 people descended on the Port of Olympia to greet more than 120 tribal canoes for the 2016 Paddle to Nisqually. The canoes were organized as families representing more than 50 indigenous nations, and had paddled, or “pulled” their canoes for more than 100 miles for a traditional potlatch gathering.

Indigenous nations participated from all over the Pacific Northwest, with the Maori journeying from New Zealand and the Iroquois Confederacy (Haudenosaunee) traveling from Eastern North America. This year’s journey marked the largest event recorded since 1989, when annual paddles were initiated to restore traditional canoe culture.

Canoe families spend years to prepare for the journey – learning traditional songs and dances, preparing hundreds of gifts, building their canoes and practicing on the water. In effect, the annual gathering is an occasion to showcase the strength, skill and perseverance of tribal cultures all across the Pacific Northwest and an invitation to restore traditions that knit those cultures together.

Two new canoe families made their debut in Nisqually this year – Portland’s Native American Youth and Family Center and the Confederated Tribes of Warm Springs.

This year’s journey was hosted by the Nisqually Tribe, which involved hospitality for the canoe families in a six-day potlatch ceremony, a gift-giving feast, that often ran late into the night. As celebrations of cultural regeneration, the annual canoe journeys are the largest intertribal gatherings in the Pacific Northwest and are believed to be the largest drug- and alcohol-free gatherings in the region.

The annual canoe journey began in 1989 with the celebration of the Centennial Accord, which marked a turning point in tribal relations with the state of Washington, and established a formal government-to-government relationship between state agencies and tribal governments. The 1989 accord promised an end to the era that branded native fishermen as “renegades” simply for practicing their ancient fishing traditions.

Up until the 1980s, the state of Washington had harassed and clubbed native fishermen for exercising their constitutionally protected treaty rights to hunt, fish and gather food at their accustomed places. Those practices were formally rebuked by U.S. District Judge George Boldt in 1974 after a similar ruling from U.S. District Judge George Belloni across the river in Oregon. Extreme resistance to these rulings by the state of Washington eventually forced a federal takeover of Washington fisheries. The Ninth Circuit Court of Appeals wrote, “Except for some desegregation cases … the district court has faced the most concerted official and private efforts to frustrate a decree of a federal court witnessed in this century.”

And the state’s outrageous efforts to obstruct native culture was, unfortunately, not limited to fishing. Jane Renville Wood (Sisseton-Wahpeton-Oyate) of the NAYA canoe family explained:

“Whether it was Ghost Dance, whether it was Sun Dance – people were actually imprisoned, hanged, for doing their cultural, spiritual events. And so for a long time it happened, but it was underground and hidden. There has come a time where people feel they can do these things again within their communities, and actually publicly. So this is really a rebirth, and that’s why it’s so cathartic.”

The return of canoe culture

After winning their century-long battle for fishing rights, native peoples celebrated by initiating the first modern canoe journey – the 1989 Paddle to Seattle. Since the following journey to Bella Bella in 1993, these canoe journeys have happened every year and have seen steady growth.

Renville Wood likens it to the Olympics, with the host country named in advance, and the understanding that they will make all accommodations for their guests. Unlike the Olympics, of course, the goal is not to generate tourism dollars, but rather to regenerate culture and hospitality.

That difference produces consequences. While the Olympic games in Brazil have drawn heavy public criticism for displacing the poor, the potlatch at the heart of the canoe journey pushes in exactly the opposite direction – emphasizing the gifting responsibility of those who are most able to procure wealth. In this way, the potlatch encourages the circulation of wealth and discourages the accelerating dynamic of rich and poor that plagues settler society.

The Nisqually Tribe organized for three years to prepare for the gathering and spent $13 million to provide accommodations for their guests, Renville Wood said. According to the Nisqually, the land cleared for their guests will also be the future site of an affordable-housing complex for tribal elders. 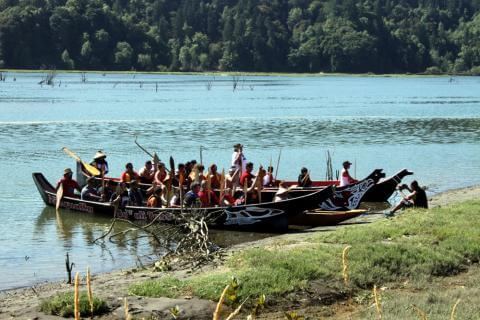 Tribal communities are greeted upon arrival at the 2016 Paddle to Nisqually. Photo by G.H. Thorn

“Every single boat pulled up to shore and asked permission to land,” Renville Wood said. “Everyone says with a song, in their native language, ‘We are tired, we are hungry, we are thirsty, we seek permission to land.’”

This year, the Nisqually canoe family was the last to land and carried Washington Gov. Jay Inslee into the port.

After all the boats had landed, canoe families were shuttled several miles east to Nisqually country to make camp. The next day, hundreds gathered to honor the historic site where the 1854 Treaty of Medicine Creek was signed – a site that is now in the Billy Frank Jr. National Wildlife Refuge.

The return of gift culture

For six days after the landing, canoe families went through the potlatch protocol – performing traditional songs and dances and giving and receiving gifts with the host tribe.

“It is a potlatch ceremony from the Northwest Coast,” she said. “What happens is: Your wealth is not determined by how much you accumulate but by how much you can give away. And so that’s something that our community has been doing this past year – gathering as much to give away as we possibly can.

“The potlatch was a really spiritual ceremony that was conducted by the Northwest coast Indians, but it was forbidden by the government back in the late 1890s,” she said. “After 1978, with the passage of the Indian Religious Freedom Act when we got to practice our religions again, the potlatch came back and has been spreading all across the Northwest Coast more and more, just as the canoe journey is spreading more and more across the Northwest. So this is really a spiritual journey that we’re on.”

The NAYA canoe family began its weeklong journey from Skokomish on July 23, traveling alongside three other canoe families – the Grand Ronde, the Coos and the Suquamish. The canoe families arrived at Port Gamble the following evening, then got up at 3 a.m. the next morning to pull themselves to Suquamish. They picked up dozens of canoe families along each stop. By the end of the week, they had pulled 180 miles and were accompanied by more than 120 native canoes.

NAYA’s 30-foot canoe is a mix of cedar strip and fiberglass and was built by master weaver, carver and canoe-maker John Edward Smith of Skokomish. It was named El Lobo (The Wolf) by elder Frank Alby. Skipper Lukas Angus (Nez Perce) said the crew tried to model its behavior on a wolf pack. 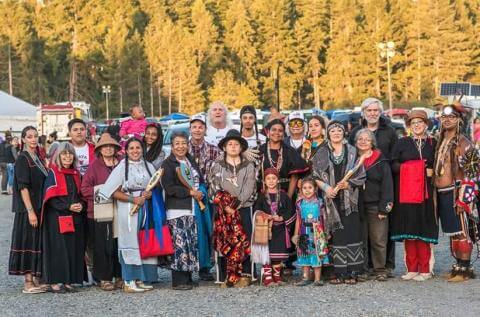 Portland’s Native American Youth and Family Center made its debut at the 2016 Paddle to Nisqually. Photo by Zach Krahmer

Many participants struggled to express how important it was to be part of the journey.

“I’m here getting my real education,” Lopez said. “Just coming in and being there in front of all the people, being announced as NAYA, filled me up with more pride than I have felt in a long time. It just made me feel like I was a part of something larger than just myself.”

“I’d rank it something like 10-plus,” said Renville Wood. “It connects people on every single level. It’s a chance to connect again. It’s a chance to be around people who are just like you, who understand you. It’s so wonderful. I’m just at a loss to describe it.”

To prepare for the journey, the NAYA canoe family practiced every Sunday for three years. Their routine followed a basic alternating schedule: twice a month they practiced in their canoe on the Willamette and Columbia rivers; twice a month, they did off-river exercise and practiced traditional songs and dances. All of this would have been impossible without the constant guidance of elders.

A ground support team of family members moved alongside the canoe route to replace tired crew members and to ensure the camp was well stocked with supplies.

“Most of our eating was done on the canoe during the day,” Angus said. “We kind of ate our lunches while paddling.”

Deanie Johnson (Warm Springs) said she is immensely proud of what her tribe has done by joining the canoe journey.

“We originated from the Columbia River, and we did use canoes before the treaty of 1855 forced us back inland to the Warm Springs reservation where it is now, in central Oregon,” Johnson said. “So we kind of lost that canoe culture. But we brought back our tradition with the canoe journey. It brought a lot of people together to work with a team and bond, to work together and pull as one, come together and celebrate our dances. More of our people have learned the dances, the songs, everything that ties in to being on the canoe journey, so I think it’s a wonderful thing for our people to revive our culture and to carry it on.”

The growth of the tribal canoe journeys and the increasing generosity of its hosts are an important sign of cultural revitalization in Indian country. It is also evidence of the growing success of indigenous sovereignty and the need for settler governments to adjust to that sovereignty so that cultural resources can be restored.

By reconnecting youths and elders, the canoe journeys reunite families and re-weave the relationships that allow for the transmission of vital cultural knowledge – a critical source of healing for native communities.

“When you hear a drum, it beats to your heart,” NAYA’s Jane Renville Wood said. “You feel it in your heart. And you literally just start crying. Because it’s been gone for so long. And to have it again is an amazing, amazing moment.”

This article was originally published at Street Roots. It has been re-published at IC with permission.