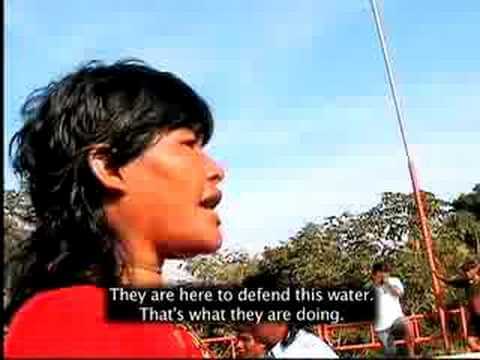 Owners of the Water

Conflict and Collaboration over Rivers
Support our journalism. Become a Patron!

This is a trailer for the upcoming documentary film, Owners of the Water.

A collaboration between two indigenous filmmakers (a central Brazilian Xavante and a Wayuu from Venezuela) and an anthropologist, the film explores a campaign headed by the Xavante to protect the Rio das Mortes River Basin from the soy monoculture industry. The Xavante say they are not necessarily opposed to soy cultivation, but they cannot accept the deforestation that comes with it, or the dumping of agro-toxins into the region’s water systems.

The film highlights a May 25, 2006 demonstration in which a group of Xavante blockaded a national highway in Mato Grosso.

Lasting for only one day, the group strategically used their culture to raise awareness about their concerns. “Representatives from the Federal Highway Police supported the effort and respected the Xavante’s programme,” noted Survival International , however there were some non-indigenous people that aggressively opposed it — who even went so far as to call for their outright murder.

The film also showcases the Xavante’s effort to rise above such a coward’s plea, by building networks among different indigenous peoples and across other nations.