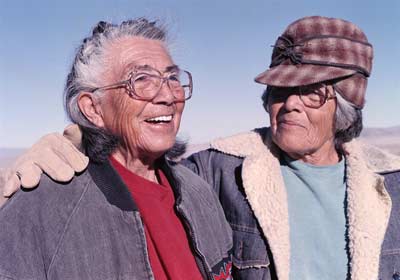 Our Land, Our Life

The following 25 minute video focuses in on the struggles of Carrie and Mary Dann, two Western Shoshone Grandmothers who have since 1972 been working to protect their lands from the United States’ gradual encroachment and utter usurpation.

Their Nevada Territory—in fact two-thirds of the State of Nevada and small portions of California, Idaho and Utah are protected under the 1863 Treaty of Ruby Valley, which was a treaty of Peace and Friendship that granted the US the right of safe passage. But the United States fraudulently nullified the treaty, and has since engaged in constant efforts to take their lands. Today, nearly 90% of Western Shoshone land is ‘owned’ by the US Government.

In 2005 Mary Dann passed away—but continues to struggle in Spirit with her Sister.