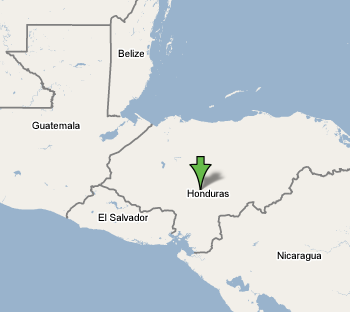 After British and Canadian politicians visited Honduras to have a look at the problems associated with Goldcorp in the region, the Siria Valley Environmental Committee has authored the following open letter—discussing the historical and ongoing damages caused by the open pit gold mine in the Siria Valley (department of Francisco Morazan, Honduras)

Thanks to rights action for sending this out.

We extend our welcome to Alexa McDonough, Canadian Member of Parliament, thanking her for her interest in learning in situ about the serious problems Canadian mining is causing in the communities of the Siria Valley, in the department of Francisco Morazán, Honduras. With her visit, we take the opportunity to communicate our position and demands to the Canadian government.

The Siria Valley Regional Environmental Committee has been struggling for more than seven years against the Entre Mares mining company in Honduras, a subsidiary of the Canadian/US transnational corporation Goldcorp [formerly Glamis Gold]. Over these past seven years, we have been denouncing the grave environmental, social, economic and cultural impacts that the San Martin open pit gold mine has caused in our region.

Communities are suffering from a severe lack of water due to the vast quantity of this vital liquid used by the company. This shortage has destroyed the local economy, previously based on agriculture and cattle ranching, in turn provoking a massive exodus of youth to Canada and the United States.

There is evidence beyond a shred of doubt revealing the contamination of various water sources, including community wells, with heavy metals such as arsenic, lead, aluminum and mercury, provoking serious health problems. In comparison with years before the mining exploitation began, there has since been a dramatic rise in dermatological and respiratory illnesses, hair loss, miscarriages and stillbirths.

To date, none of these problems has been resolved. To the contrary, we have seen the complete indifference of Goldcorp, despite the fact that we have even taken our denouncements to the company’s annual shareholders meetings.

We understand that both the government and the population of Canada invest in this company via the publicly funded Canada Pension Plan. Furthermore, we see how certain Canadians have benefited from this disaster with grotesque profits, such as the case of Goldcorp Board Chairman Ian Telfer, who earned some 23 million dollars last year. It is an example of the development model promoted by the Canadian government, which is provoking the chronicle of a death foretold through the sacrifice of the Siria Valley residents.

For all of the above, we hold you responsible for the harms that this transnational company from your company continues to cause in our valley. Faced with the exit of the company from our region and also with the inadequate mine closure plan it proposes, our Committee demands that our proposals regarding the mine closure process be included and respected.

AT A MINIMUM, WE DEMAND:

Compensation for the people whose health has been affected.

Clean water sources, free from all contaminants for all of the communities.

The reforestation of the area with species native to the region – the same species that were found here before the mine.

That the lands are made once again apt for agriculture.

Land titles for the lands in Palo Ralo that are still without legal security.

We demand that our position be respected and that you take urgent action, given the clear responsibility of Canada for the problematic situation of the Siria Valley.

Please contact your own politicians and media to support the demands of the Siria Valley Environmental Committee. You can follow-up directly with Alexa McDonough, Canadian Member of Parliament, at: alexa@hfx.eastlink.ca; mcdonough.a@parl.gc.ca; mcdona0@parl.gc.ca.

For more information about these struggles, or to make a financial contribution for the development and environmental defense work of the Siria Valley Committee: info@rightsaction.org.