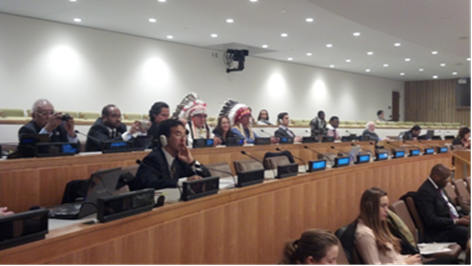 October 28, 2013 – New York, New York – This morning in New York, Okimaw Wallace Fox of Onion Lake Cree Nation along with Chief Craig Makinaw of Ermineskin Cree Nation along with a small delegation was at the General Assembly to hear the report of the Independent Expert Alfred de Zayas on the promotion of a democratic and equitable international order.

“Professor de Zayas has made a number of significant recommendations related to the rights of Peoples who have been unable to exercise their right of self-determination,” stated Okimaw Fox. “His recommendation contained in paragraph m – that ‘the General Assembly may consider referring specific legal questions to the International Court of Justice for advisory opinions, including issues of self-determination’ would give us an option outside of the state of Canada. This is important for us – our young people want to see a future. We have a door opened – our work is to use this opportunity.”

“In paragraph 59 of his report, there is a reference to the state “manufacturing consent” that denies us our rights under Treaties. The Independent Expert correctly pointed out that states “organized and conducted by administering and/or occupying Powers to achieve predetermined results,” added Chief Makinaw. “Every time, we meet with the government officials, they deem it consultation. It is a gross violation of our rights.”

“Our Nations have been colonized and continue to be colonized. Our rights as Peoples within our Territories are denied by the colonizer state. While the state of Canada can sit within the United Nations, our Nations are denied. Why? We are the original Nations. Our territories and resources fuel the state. Canada is busy trying to make deals to see our resources to the European Union, the Asian market without any revenue flowing to our Nations,” added Okimaw Fox.

In his report, the Independent Expert made reference to the complaints that Indigenous Peoples have taken to the United Nations on the legislative agenda of Canada. “Our attempt to have our right to give our free, prior and informed consent to matters affecting us has been consistently denied to us by the Harper Government. We have appeared before many committees of Parliament. We were not allowed the time or space to make any statements or have our concerns taken seriously,” stated Chief Makinaw.

The Independent Expert wrote: “their (Indigenous Peoples) involvement in decision-making is pro forma, since, regardless their views, governments pursue their agendas and only perfunctorily listen to them. In particular, some indigenous complained about material breaches of treaties”.

In conclusion, Okimaw Fox said: “This is so true in Canada today – Our Peoples do not want National Legislation on education. The Special Rapporteur James Anaya in his recent visit to Canada called on the state to reconsider the legislation. Less than a week after his visit ended, Canada introduced the blueprint for this proposed legislation in draft form. Is this respectful of the United Nations? The state violates the Charter, violates our treaties and thumbs its nose at the world. Indigenous Nations want a process that is respectful of our rights. As outlined in the report of the Independent Expert: the General Assembly should consider ‘peoples under occupation have a genuine opportunity to participate in decision-making processes’. We are ready – is Canada ready?”

The Cree Nations are located in Treaty No. 6 Territory that spans from what is present day Manitoba to the Rocky Mountains.