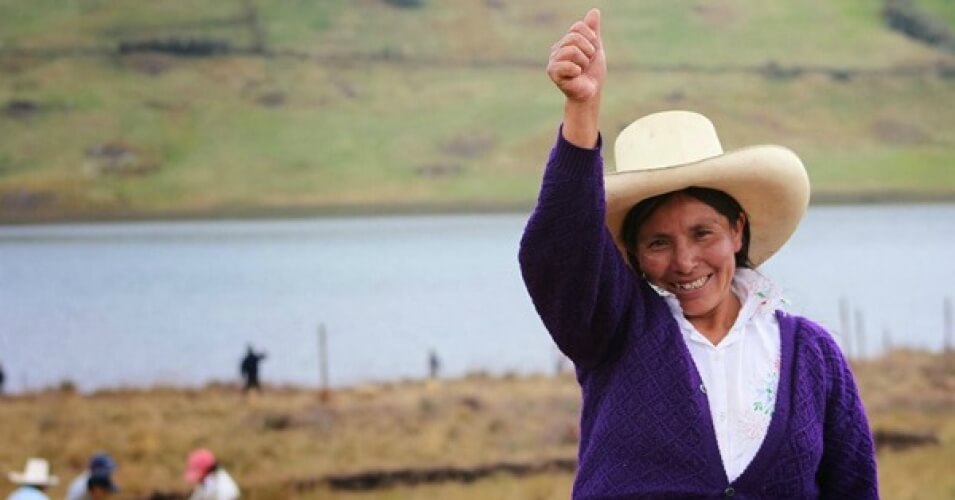 Indigenous Peruvian farmworker Maxima Acuña de Chaupe withstood violent eviction attempts, beatings, and a legal battle to protect her land from being turned into an open-pit gold mine
Acuña de Chaupe at her property in front of the Blue Lagoon (Photo: Jorge Chávez Ortiz)
Support our journalism. Become a Patron!

For over three years, indigenous Peruvian farmworker Maxima Acuña de Chaupe has refused to allow a U.S.-based multinational corporation to turn her land into an open-pit gold mine, withstanding multiple violent eviction attempts by corporate and state agents.

On Wednesday, Acuña de Chaupe finally saw victory when a Peruvian appeals court struck down a lawsuit levied by the Yanacocha mine—which is 51 percent owned by Colorado’s Newmont Mining Corporation—that had sought to expel and imprison the family for “invading” their own land.

The ruling is an important win in a case that has become a rallying point for local resistance to multinational plunder.

In 1994, Acuña de Chaupe and her family built their home in Tragadero Grande in the region of Cajamarca next to the Blue Lagoon of Celendin. This lake was sought after for the building of the open-pit Conga gold mining project—an extension of the one at Yanacocha.

This mine is widely opposed by peasant, worker, and indigenous peoples in the region, who have protested its resource extraction, exploitation, displacement, and environmental harm with with mass marches and general strikes.

When Yanacocha sought to buy Acuña de Chaupe’s land in 2011, she refused, in a bid to protect the environment and her family’s home.

“I may be poor. I may be illiterate, but I know that our mountain lakes are our real treasure,” Acuña de Chaupe told New Internationalist Magazine two years ago. “From them, I can get fresh and clean water for my children, for my husband and for my animals!”

“Yet, are we expected to sacrifice our water and our land so that the Yanacocha people can take gold back to their country? Are we supposed to sit quietly and just let them poison our land and water?” Acuña de Chaupe continued.

What ensued, according to Acuña de Chaupe, was a corporate intimidation campaign, orchestrated by the mining company with the aid of private security and the Peruvian state.

Acuña de Chaupe says she and her family have faced at least three violent eviction attempts by the company, aided by Peruvian police and soldiers. One beating left Acuña de Chaupe and her daughter unconscious and landed her son in the hospital.

The plight of Acuña de Chaupe and her family sparked outrage and support from regional and international organizations, including the Women’s Movement of Peru and World March of Women. At the recent People’s Summit in Lima, Peru, climate justice advocates held a large rally in solidarity with Acuña de Chaupe.

Here is a video of Acuña de Chaupe telling her story:

When Acuña de Chaupe refused to give in, Yanacocha sued her and her family on charges they were illegally occupying their own land. In August, a judge sentenced four members of her family to “to two years and eight months of suspended imprisonment for not vacating the land,” Telesur reports. “The judge also ordered the family to pay close to US$2,000 in penalties.”

Wednesday’s ruling, however, tosses out all of these sentences.

“I want to thank the judges of the court of justice of Cajamarca for being impartial and applying justice and for not permitting that we the farmworkers suffer at the hands of Yanacocha,” Acuña de Chaupe declared following her acquittal. “I pray to God to take care of them. During the four years this process has lasted, many authorities tortured me, defamed me, and persecuted me. But here we have good authorities.”