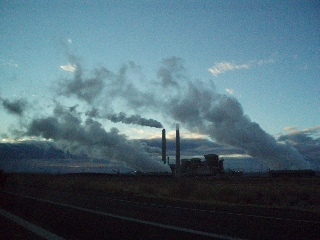 One foot in the grave for Desert Rock power plant

The proposed Desert Rock Energy Project may be on its last leg now that the U.S. Environmental Protection Agency has withdrawn the air quality permit that it previously issued for the controversial project.

Thanks to the dedication of Dine CARE and Dooda (NO!) Desert Rock (DDR), the EPA said that the permit should not have been issued because there never a complete analysis of how much mercury the coal-fired power plant would send out, or on the ways it would impact endangered species as well as soil and vegetation in the region.

Dine CARE and DDR intervened in the original permit decision, “in emergency response to the current industrial genocide of tens of thousands of Navajo people in the Four Corners area who are now sick and dying from decades of exposure to deadly air pollution emitted from the existing Four Corners and San Juan power plants,” explains a recent press release from Dine CARE.

If Desert Rock is permitted to go ahead, it would create “a triangle of death in the San Juan Basin.”

While applauded by both groups, along with many Navajo and others around the world, Navajo President Joe Shirley has himself condemned the permit withdrawal, alleging that “Every day this project is delayed, we are losing our Navajo children to poverty and alcoholism because of lack of opportunity.” 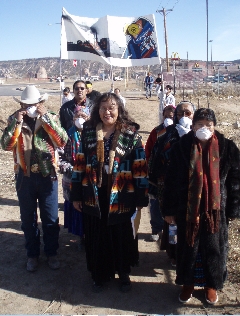 It’s a “misguided” response, says Dine CARE. “To claim that poverty is causing death in Navajo is unbelievable and disgraceful. The Navajo people are resourceful and our traditional kinship Ké would not allow poverty to take our people.”

They go on to point out that the main causes of death on Navajoland are: “Auto accidents, cervical cancer, suicides, tuberculosis, pneumonia/influenza, infant deaths and post neonatal deaths.”

Many of these deaths are undeniably the result of industry pollution from the existing coal plants (video) and the endless siege of uranium mining on Navajo territory.

Desert Rock was slated to be fully operational in 2013, but with the permit withdrawal it may be now be destined for the graveyard.

That is precisely where it should be, so the land and the people can live.