Olympics No Champion for Human Rights 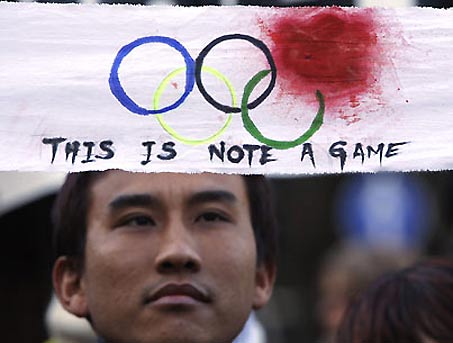 From Beijing to Vancouver, governments have been bending over backwards to prepare for the Olympics. Both are doing everything they can to ‘clean up the streets’ and pack down anyone that threatens to tarnish the image they wish to portray for the games.

So many people have been forced out of their homes, so many children have been made into slaves, so much land has been taken and destroyed. It’s all done in the open for all to see and those responsible for it couldn’t care less.

The Olympics Committees’ are the same. They silence the athletes and demand their innocence. I’m not even sure they feel the slightest bit of remorse…. After all, such feeling infringes upon the spirit of the Olympics. There’s just no room to be weighted down by that pesky thing called conscience.

That couldn’t be made any more evident than by the very anthem of the Olympics:

Immortal spirit of antiquity,
Father of the true, beautiful and good,
Descend, appear, shed over us thy light
Upon this ground and under this sky
Which has first witnessed thy unperishable fame.
Give life and animation to those noble games!
Throw wreaths of fadeless flowers to the victors
In the race and in strife!
Create in our breasts, hearts of steel!
Shine in a roseate hue and form a vast temple
To which all nations throng to adore thee,
Oh immortal spirit of antiquity.

What an obscure example they set in world. What antiquated vision.

The Olympics committees and states to host them, even official corporate partners like Mcdonalds, Coca Cola, Kodak and GE… They all see it the same way. They couldn’t care less. Just as long as they get to play their games.

Please visit for the following websites for more news and background