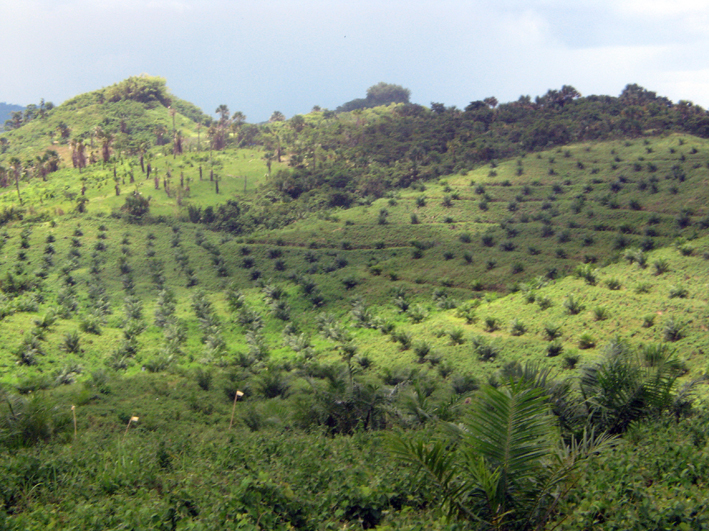 In addition to the alarming expansion of nickel mining on Palawan island in the Philippines, Indigenous peoples are now being confronted with new threats posed by the incursion of oil palm plantations.

According to the indigenous network ALDAW (Ancestral Land Domain Watch), “Oil palm plantations in Palawan are being established by the Agumil Philippines Inc., a joint venture between Filipino and Malaysian investors, that also engages in the processing of palm oil. The LandBank of the Philippines is backing the project financially.”

“LandBank’s contribution to President Aquino’s commitment to develop the rural economy and to raise farmers’ income should not include oil palm development,” says Artiso Mandawa, ALDAW Chairman. “It is well known that this crop benefits better-off farmers and entrepreneurs, rather than small-scale farmers and indigenous peoples. We look forward to more sustainable investments for improving agricultural productivity of marginalized farmers. Meanwhile, a moratorium on oil palm expansion should be implemented with haste.”

In a detailed Press Release, ALDAW notes that most of the plantations are located in the municipality of Española, but they’re also being set up in Brooke’s Point, Bataraza, Rizal, Quezon and other municipalities. In some places the oil palm is taking over cultivated areas (e.g. rice fields), which is effecting local self-sufficiency.

Indigenous peoples in at least one community, Iraray II in Española, have also encountered a ‘new’ pest that is burrowing into their coconut palms and planting eggs. “Local indigenous people showed specimens of this pest to ALDAW mission members, and the insect was later identified as the Red Palm Weevil (Rhynchophorus ferrugineus). The red weevil is reported to be a native of south Asia, however, the Palawan of Iraray II claims that they only began to experience massive pest attacks on their coconut groves, after oil palms were introduced into the area at the expense of the local population of buri palms (Corypha elata). The latter is a popular basketry material for both the local Palawan and farmer communities. The trunk of this palm contains edible starch. The bud (ubud) is also edible raw or cooked, as well as the kernels of the nuts,” ALDAW explains.

In a new video produced by ALDAW, titled “Oil Palm Aggression On Palawan Unesco Man & Biosphere Reserve“, an Iraray II community member states, “Since the time of our ancestors until now, there were no pests affecting our coconuts. New diseases came along with the oil palm plantations. We want the company to reimburse us for each dead coconut.”

ALDAW is now in the process of mapping all oil palm plantations in Palawan, through the use of geotagging technologies.

They are also raising a number of other concerns, including “a scarcity of public records” concerning “the issuance of land conversion permits and environmental clearances to oil palm companies, as well as to the local cooperatives created in the various barangays.” ALDAW’s concern here is that the community members, who end up renting parts of their land to the company, “have no clear understanding of the nature of such ‘agreements’ nor [do] they possess written contracts countersigned by the company. There is a risk that members of local communities who have joined the so-called ‘cooperatives’ will soon become indebted with the oil company.”

A more long-term concern is how the plantations are going to impact biological diversity in Palawan, which is a UNESCO Man and Biosphere Reserve. “Scientific evidence indicates that–beyond the obvious deforestation that results from clearing lowland rainforest for plantations–there is a significant reduction (on the order of 80 percent for plants and 80-90 percent for mammals, birds, and reptiles) in biological diversity following forest conversion to oil palm plantation. Moreover, the use of herbicides and pesticides used in oil palm plantations heavily pollutes local waterways. Notoriously, further destruction of peat land increases the risk of flooding and fire,” ALDAW states.

Finally, ALDAW observes a lack of dialogue concerning oil palm in the Philippines, stating, “sustained civil society engagement with the industry and national dialogues about oil palm have been limited to Indonesia and to a lesser extent Malaysia. In the Philippines, local actions in addressing oil palm issues have so far been limited and thus, there is a need for greater sharing and concerted action at the local/national and regional levels.

Address your concerns to: