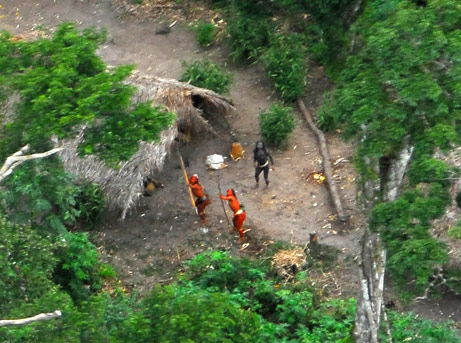 The Anglo-French oil company Perenco has been given permission from the Peruvian government to drill for oil in a remote part of the Amazon, currently inhabited by uncontacted tribal peoples.

The company is now preparing to send more than 800 workers to the region, risking violent conflict and more likely decimation of the tribal peoples through disease brought on by first contact.

“Perenco denies the existence of uncontacted tribes in the area, despite confirmation of their existence by Peru’s government, Ecuador’s government, the company that used to work in the area (Barrett Resources), and Peru’s indigenous organizations,” notes a recent press release by Survival International. “Ecuador’s government has even allocated US$38,000 to protect the tribes, and Barrett admitted contact with them was ‘probable.'”

“Peru’s national indigenous organization, AIDESEP, is opposed to Perenco’s plans. It has appealed to Latin America’s top human rights body, the Inter-American Commission on Human Rights, urging it to help prevent Perenco working in the region.”

AIDSEP, along with Shinai and other groups, has also proposed the establishment of reserves to protect uncontacted peoples, (possibly) including one for the region held by Perenco (who now owns Barrett).

Despite this, “Perenco seems determined both to push ahead with its mega-project, and also to deny that the uncontacted Indians even live there, says Stephen Corry, Survival’s director. “It ought by now to realise that the seemingly isolated jungle it is operating in is actually the ancestral home of several Indian groups, who will very likely see its workers as invaders. Everyone else has acknowledged this, including Perenco’s predecessor.’