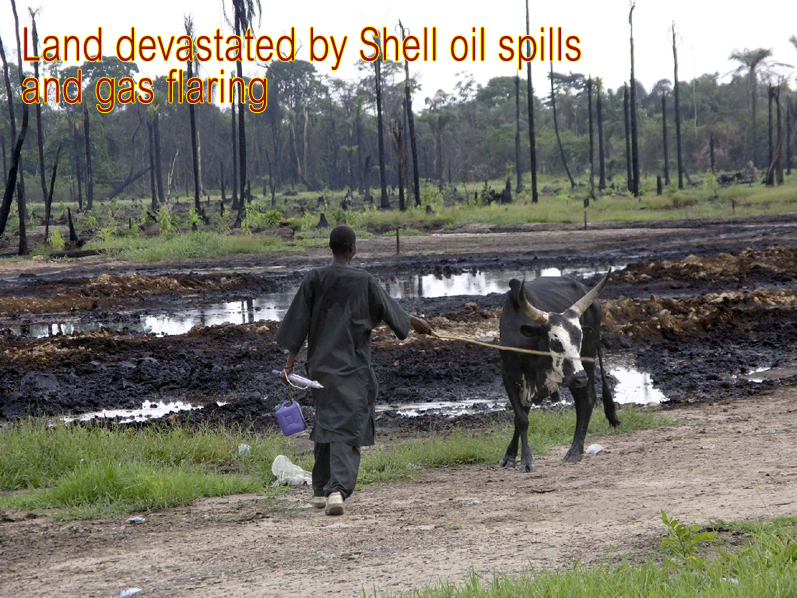 Photo Credit: Friends of the Earth
Support our journalism. Become a Patron!

The Movement for the Survival of Ogoni People (MOSOP), an Ogoni-based non-governmental, non-political organization for the Ogoni people of South-Eastern Nigeria, have announced the creation of a new Environmental Protection Agency to make sure that oil companies operating in Ogoniland, like Chevron and Royal Dutch Shell, are held accountable for their ‘environmental crimes’.

A measure to make sure that Nigerian National Petroleum Corporation, Royal Dutch/Shell and others face compelling action to hold them accountable for environmental crimes in Ogoni.

MOSOP President and Spokesman, Dr. Goodluck Diigbo said that the Ogoni people have learnt the hardest lesson that it was not the wisest thing to do, to allow petroleum operations in Ogoni without a formal Environmental Impact Assessment Study (EIAS).

He said other relevant companies must be required to conduct EIAS to merit continual operations in Ogoni.

Dr. Diigbo said this today, 24th December, 2011 during a MOSOP inter-kingdom assembly held at Akpajo, Eleme near Port Harcourt. He, then, announced the establishment of an Ogoni Environmental Protection Agency (OGEPA), headed by Mr. John Lar-Wisa.

Lar-Wisa, currently serves as Secretary of Amnesty International Group 17 in Nigeria and has nearly 20 years of community and public service. Earlier in the week, Lar-Wisa’s appointment had been debated and approved by a joint-meeting of elected village councilors and MOSOP Central Assembly.

“As a people, the Ogoni who depend upon cultures, spiritual traditions, histories and philosophies, especially our rights to lands, territories and resources for political, economic and social survival, we cannot wait for another 25 – 30 years.

The Ogoni people cannot fold their hands and hope that one day, the NNPC (Nigerian government oil company), Royal Dutch/Shell and Chevron will knock at our doors to accept responsibility for devastation of our land,; without significant and compelling action by the Ogoni people,” Diigbo remarked.

According to Dr. Diigbo, the task of OGEPA is to coordinate efforts to protect the inherent rights and means of livelihood of the Ogoni people, ensure healthy and safer environment.

He stated that OGEPA will collaborate with similar institutions, the Ogoni Central Indigenous Authority (OCIA) and nongovernmental organizations worldwide.

“With its three-tier operational strategy, OGEPA will cooperate with its sub-committees at the village, kingdom and central levels to make sure that Ogonis do not engage in activities detrimental to the environment,” Diigbo said.

The 21 member agency has Chief Nwakaji Ngei of Ogale village in Eleme Kingdom as the Deputy Administrator.

Prior to his appointment by the Central Assembly of MOSOP, Lar-Wisa coordinated the Ogoni team that monitored the United Nations Environmental Programme (UNEP) Ogoni Environmental Assessment, led by Mr. Mike Cowing.

Lar-Wisa had initiated international dialogue and shared information on due process as he had tried to persuade Cowing and his UNEP colleagues to comply with the UNEP, World Bank and Nigerian guidelines for conduct of EIAS.

John Lar-Wisa who holds a Certificate in Civil Engineering and Bachelor of Science degree Political Science will oversee activities of OGEPA.

All the elected village councilors under the newly created Ogoni Central Indigenous Authority (OCIA) will sit on the village boards of OGEPA.