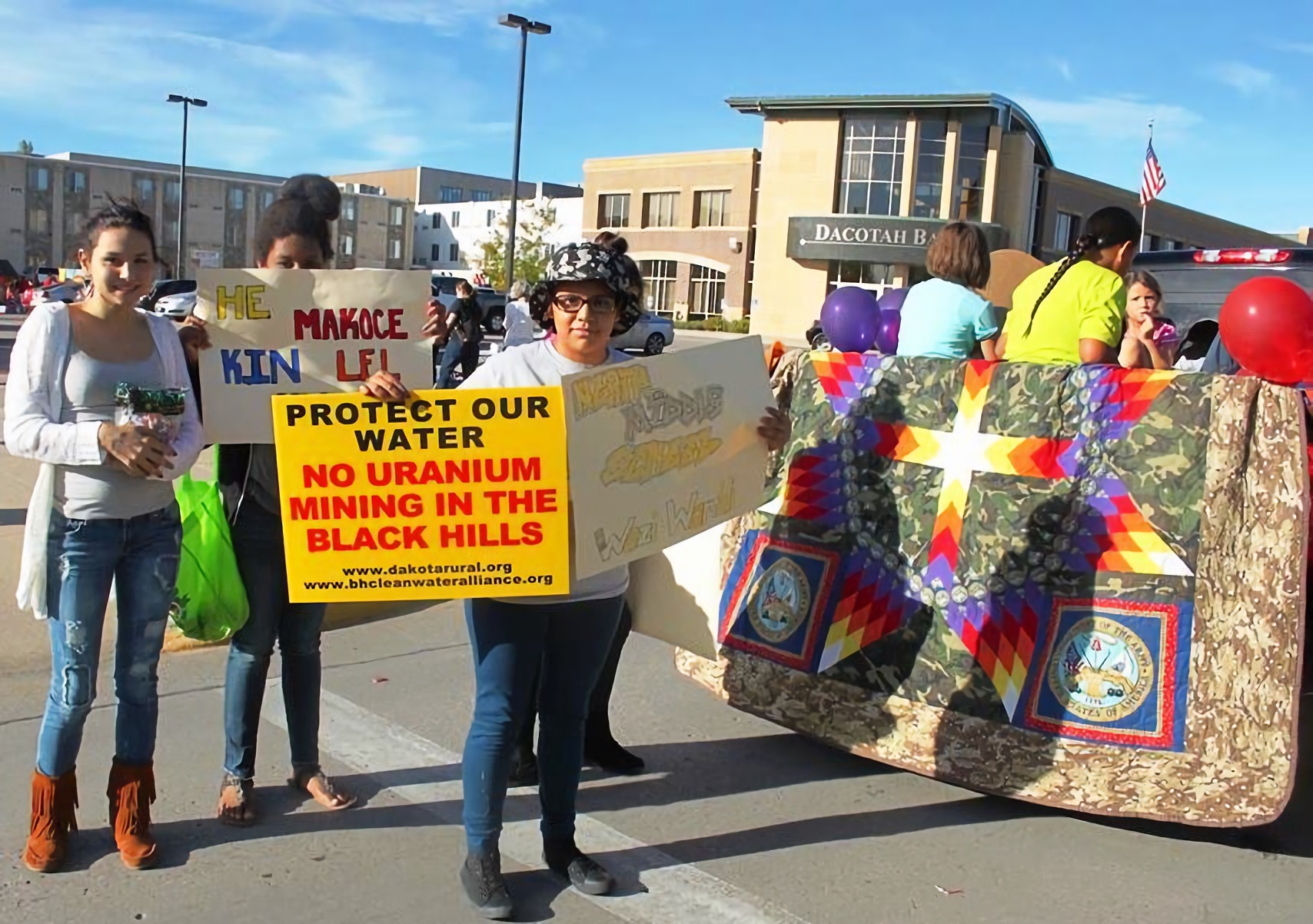 Tribal members and allies, pictured in Rapid City in 2015, continue to express opposition to licensing of proposed Dewey Burdock radioactive extraction project, which regulators say could have a large impact on Lakota cultural resources.
Support our journalism. Become a Patron!

RAPID CITY – With the Oglala Sioux Tribe set to argue Aug. 28-30 for its kind of protection of cultural resources from unprecedented uranium mining in the southern Black Hills, the tribal government and local groups urged members of the public to attend proceedings here and participate in a simultaneous outdoor cultural event to raise awareness about the issue.

A panel of administrative judges from the federal Nuclear Regulatory Commission (NRC) Atomic Safety and Licensing Board (ASLB) is supposed to be in town on these dates to hear from the tribe, the commission staff and intervenors in the case, which is focusing on the “reasonableness” of their divergent approaches to surveying tribal cultural, religious, and  historical properties at the proposed 10,000-acre Dewey-Burdock in situ leach mine and mill.

“NRC staff is attempting to escape its obligation to consider cultural resources at the site, saying it is so expensive and they shouldn’t have to do a cultural survey,” the tribe’s lawyer Jeffrey Parsons told the Native Sun News Today. “The tribe is fighting back.”

The judges ordered the hearing on the evidence this April 29, in response to an NRC staff request based on its conclusion that “further negotiation as to a methodology to resolve this contention is unlikely to be successful,” according to court records.

“The staff selected a reasonable approach for obtaining the information on cultural resources that the board found to be missing (and) was precluded from fully implementing it by the tribe’s constructive rejection of the approach. It is not feasible for the staff to obtain the information from the tribe, as the board contemplated,” staff filings say.

They note that the tribe balked on providing exclusive information under survey terms staff offered. Nonetheless, the staff holds, “The Final Supplemental Environmental Impact Statement and the adjudicatory record provides sufficient information to satisfy the requirements” of the National Environmental Protection Act in licensing the proposed radioactive materials and waste handling project.

The act requires tribal consultation in compliance with the National Historic Preservation Act before NRC staff approval of an environmental impact statement to license.

The tribe contends, not only in these administrative hearings, but also in court, that the federal government violated its own laws by inadequate consideration of tribal cultural resources and water concerns in issuing a license even before the environmental impact statement process was completed on the project in question.

The project is being promoted by license-holder Powertech USA Inc., a wholly owned subsidiary of Azarga Uranium Corp., which is carrying on a decade-long foreign crusade to clear all the U.S. regulatory hurdles that would allow the undertaking of South Dakota’s first-ever in situ mining and milling of uranium.

The activity would entail chemically leaching the radioactive toxic heavy metal from the rock in the underground water-table and processing it above-ground. The product would be trucked out of state to refinement facilities, making it available for use its ultimate destination, the production of nuclear power and weapons. The polluted water would be pumped back underground or sprayed on the surface.

The slated project site is located on 1868 Ft. Laramie Treaty land in Custer and Fall River counties adjacent to the Pine Ridge Indian Reservation and upstream on Cheyenne River tributaries, a factor that motivates appellants who have joined together as the Consolidated Intervenors.

Their numbers include members of the American Horse, White Plume, Afraid of Bear, and Red Cloud tiospayes, or extended Lakota families, who “possess important oral histories that pertain to the discussion of cultural resources going on between the tribe and the NRC staff,” according to their filings. “None of these families was consulted in connection with the NRC staff’s efforts,” they note.

The staff’s 71-page Initial Statement of Position fails to address the concept of trust responsibility, intervenors complain. That “indicates: (a)how little regard the NRC staff has for the trust responsibility owed to the tribe and its members and all Native Americans, and (b) NRC staff’s fundamental failure to comply with clear legal requirements set forth in bedrock federal law in this case.”

In Consolidated Intervenors’ view, staff’s position “can be summed up as being frustrated with the difficult work involved with consulting with Native Americans concerning their sacred cultural resources and the related cost, personnel and time resources that must be expended in order to do so competently and in good faith so as to comply with the trust responsibility,” they say.

“However, there is no legal defense or justification called the Frustration Defense that would excuse the NRC staff’s failure to abide by the trust responsibility in its consultations with the tribe and its total failure to consult with any tribal members who are not tribal officials,” they continue. “In a few days’ time and at nominal cost, Consolidated Intervenors were able to locate 22 Lakota people who said they knew something of their own knowledge from oral family histories and/or Lakota history and tradition that are relevant to the identification of sacred cultural resources within the Area of Potential Effect (APE),” they add.

“Why was the NRC staff unable to identify those people after all these years?” they ask. “Consolidated Intervenors submit that NRC staff has chosen to make the process fail by intentionally choosing to not seek input from knowledgeable Lakota people and by the NRC Staff’s intentional disregard for repeated tribal request for an iterative process that involved Lakota people including tribal members and tribal officials,” they add.

“Consolidated Intervenors were not invited to participate in any of the discussions between the NRC staff and the tribe,” they complain. Their position smacks of indignation, concluding: “Native Americans as equal peoples have the right to life, liberty and the pursuit of happiness. For Native Americans, liberty is self-government and self-determination on Native American lands and with respect to Native American cultural resources and what they, the Native Americans deem sacred.”

In a separate regulatory process, the U.S. EPA has said it will issue revised draft water permits this August for the Dewey Burdock operation to take 9,000 gallons of water per minute from three of the four main aquifers supplying Black Hills area populations.

Critics hope residents will turn out by the hundreds like they did to oppose the original draft permits aired at an earlier Rapid City EPA forum. They are inviting people to attend the NRC hearing and a free cultural event for more information at the Memorial Park Bandshell, where activities are set to kick off at 8 a.m. on Aug. 28 and continue throughout the days of the panel sessions opening at 10 a.m. at the Alex Johnson Hotel.

“Please join us starting at 8 a.m. on Wednesday, Aug. 28,” the Oglala Sioux Tribe and Magpie Buffalo Organizing said in an invitation. “We will be sharing information about the importance of this case for Lakota sovereignty, aquifers and spiritual freedom. We will have meals provided and will bring people together for cultural education, information sharing and awareness.

“This event will promote Rapid City as a whole and provide positive civic and economic benefit for our community,” the invitation, circulated in social media, said. “If anyone is interested in participating in this space of peace, we are interested in singers, dancers, treaty advocates, spiritual leaders and believers. We are greatly appreciative for all who care and share these issues,” it said.