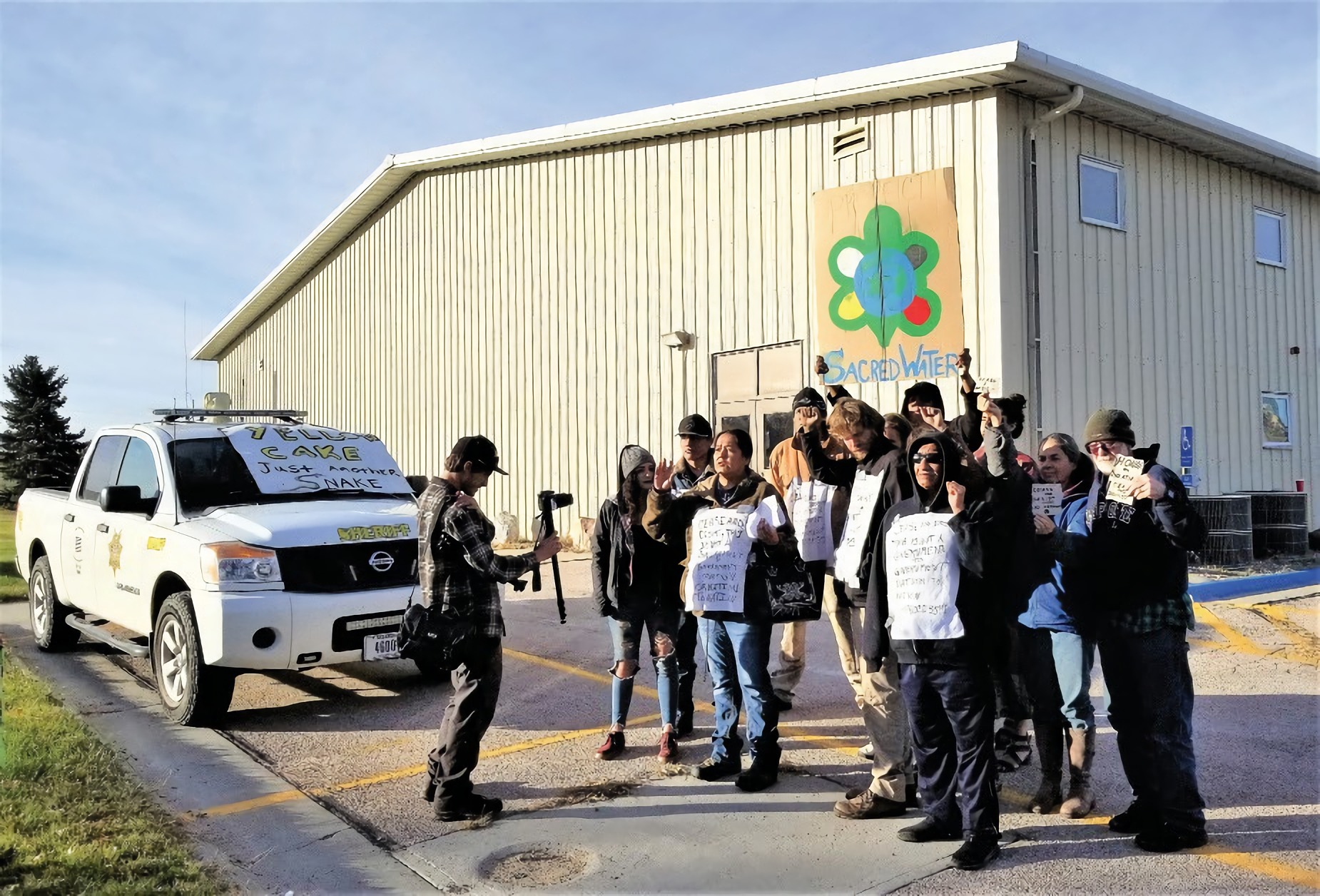 Oglala call for ‘cease and desist’

More than a dozen demonstrators with placards, who caravanned some 80 miles from their No-Uranium Camp at Pine Ridge Village Pow Wow Grounds, rallied outside the Crawford Community Building, then ventured inside to demand the parties involved in the administrative court proceedings “cease and desist.”

Their reasoning: “This is not a government-to-government, nation-to-nation process,” as it should be to comply with the U.S. Constitution and repeated federal executive orders requiring that agencies engage in official consultations with affected tribes early and often during decision making.

In addition, the pressure group contended, the tribal council did not submit enough witnesses and evidence to the ASLB to satisfy popular demand, nor were the elected tribal officials and their lawyers adequately disclosing the proceedings to tribal citizens.

Group leader Tonia Stands, an Oglala Lakota, brandished a copy of a recent tribal council resolution calling for inclusion of tribal citizens in the witness list to testify on environment, health and cultural heritage.

She noted the council was meeting simultaneously to consider another resolution to cease and desist from the mining expansion due to its violation of treaty territory protections.

The group intended to shut down the hearing for failure to address the issue of protecting cultural heritage sites in accord with Section 106 of the National Historic Preservation Act and the National Environmental Policy Act, Stands told the Native Sun News Today.

When group members interrupted the scheduled testimony, the three ASLB administrative judges conducting the hearings abandoned the hall and closed a door behind them.

Also vacating their posts were the Nuclear Regulatory Commission (NRC) staff and representatives of the Canadian uranium giant Cameco Corp., who were there to present evidence justifying an expansion permit granted to the Crow Butte uranium mine and mill.

Before the flareup, in the first part of his opening statement, Ballanco reminded hearing judges that the tribe objects to the board’s dismissal of the Oglala Sioux contention that cultural resource studies must be conducted with tribal participation in order to legally grant a permit.

The board dismissed that contention in spring of 2018. The tribe later contracted Ballanco to pursue its intervention in the case in order to reverse the permit approval granted by NRC staff. The lawyer agreed to prosecute it on a pro-bono basis for the tribe.

As a routine protocol, all remaining legal remedies must be exhausted in the tribe’s ASLB intervention to stop licensing, before the tribe can appeal the dismissal to a higher authority, he explained to the hearing-goers.

When the hearing resumed, ASLB Judge G. Paul Bollwerk assured listeners that the dismissed contention can be revisited only after the admitted contention is settled. “If we have made an error, that will be rectified,” he said.

The board consented to adjudicate the tribe’s other contention: that the application and environmental assessment leading to the permit provide insufficient information regarding the effects of proposed expansion on adjacent surface and ground water. That was the focus of the agenda for the three-day hearing schedule.

Cameco Corp.’s whollyowned subsidiary Crow Butte Resources Inc. applied for the permit in May 2012 to expand its now 27-year-old in situ uranium mining and yellow-cake manufacturing operation in Dawes County, Nebraska, adjacent to and in the White River Watershed of Pine Ridge Indian Reservation.

The corporation, world’s largest private uranium producer, ceased all its U.S. uranium production in early 2018, citing weak demand for yellow cake in the nuclear power industry. However, it continues seeking permits for its mothballed sites in Nebraska and Wyoming, in preparation for a potential market rebound.

The mining and milling activity entails injecting a leaching solution into the porous rock of the underground water table, releasing the radioactive toxic heavy metal uranium otherwise bound there, pumping it to the surface, drying it, and concentrating it on site for shipping to nuclear power plants.

The environmental assessment that led to the permit in May for the 4,500- acre so-called Marsland Expansion Area concludes that the mining operation, which would take place in the Basal Chadron water table, would be sufficiently isolated to prevent the toxic and radioactive materials released in the process from contaminating another water table or surface flows.

Judge Richard E. Wardwell called tribal government expert witness David Kreamer to testify on the issue, as well as witnesses for the mining company and for NRC.

Kreamer, a university professor and vice president of the International Association of Hydrogeologists, “The Worldwide Groundwater Organization,” testified that his analysis of results obtained from pump testing showed that the uranium production layer of the Basal Chadron Formation may not be completely confined from the overlying Brule water table, which connects with surface flows.

Speaking on an internet video connection from his location in Arizona, he said the testing revealed increments of water in the proposed production zone, suggesting a leak due to links with other strata.

Hydrogeologist David Back, testifying for the NRC staff, noted that some water could have been released from the clay layer above the Basal Chadron test, but no drawdown was observed in the overlying Brule layer, suggesting the production zone is safely confined.

Kreamer argued that data selectively excluded from the test report could suggest the production zone is not in a confined water table as applicants assumed.

He also doubted that the production zone is of a regular consistency, as desired for safe mining. Instead, he maintained, it is made up of diverse components.

The ASLB is an arbitration panel independent of the NRC staff and commission.

This article was originally published at Native Sun News Today. It has been re-published on IC with permission.