March 5th, 2012, everyone had their ear to the new moccasin telegraph. Social networks, telephones, and word of mouth networks were abuzz with reports of Oglala Lakota Nationals preventing oil pipeline materials, destined for Canadian Tar sands and/or Keystone XL infrastructure locales or some unknown destination, from being transported across the Pine Ridge Reservation’s Treaty territory. Information travelled to Debra and Alex White Plume (Owe Aku, Inc. “Bring Back the Way) and Olowan Martinez that semi-trucks loaded with enormous oil pipeline components were set to cross Oglala territory sometime during the afternoon on March 5th, 2012; “We did not know where the equipment was going, but we knew that these trucks were too huge, too heavy, and too dangerous to pass our roads. We thought the equipment may be going to the Tarsands oil mine, or other oil mines in Canada,” Debra White Plume explained.

A call went out via digital media and other sources for all able bodied and willing participants to mobilize and report to Wanblee, South Dakota, for an impromptu gathering of scores of activists ready to block the road with their bodies to prevent semi-trucks and pipeline components from crossing Oglala Territory. Within minutes the confrontation happened as several State and Tribal police officers and other officials responded to the tense scene. Oglala Tribal police arrived immediately with one Sergeant telling the road-blockers that the South Dakota Highway Patrol was parked a few miles down the road at the border between Oglala Country and the State of South Dakota but that the SD Highway Patrol would not proceed onto the reservation. Notably, this Sergeant also advised those present that the FBI (Federal Bureau of Investigation) was en route to the reservation in two vans from Rapid City, SD. However, at the conclusion of the day there were no signs of such FBI presence.

The Texas semi-trucks, transporting 1.25 Million-dollar “Treater Vessels” used in oil, gas and element separation, were stopped in their tracks as they approached the human roadblock. The human roadblock that featured two Lakota grandmothers: Renabelle Bad Cob Standing Bear (in her wheelchair) and Marie Randal (in her 90s). The drivers were questioned by those forming the blockade as to why they were crossing Oglala lands. One of the drivers responded that they did not know they were crossing Indian land, only that they were following company directives regarding their assigned routes and that their Canadian Corporation had received this particular route information as a result of a partnership with the State of South Dakota, whose elected officials have always supported the Keystone XL pipeline. This information prompted Tom Poor Bear (Vice President of the Oglala Lakota Nation) to phone South Dakota State officials in Pierre, SD, inquiring as to the nature and origin of the route of the stopped truckers. South Dakota affirmed to Oglala Vice President Tom Poor Bear that indeed the State was involved with planning such route, ostensibly without consulting the Oglala Lakota Nation. The heavy-hauling trucks were allegedly cutting through Oglala country in attempts to avoid a $50,000.00 per-truck-fee to pass through using State of South Dakota roadways. 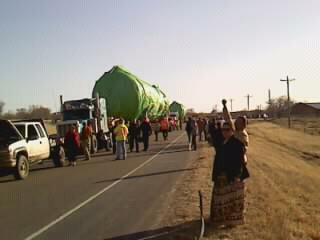 Photo courtesy Native Impact, Kyle, SDDuring the roadblock, police ordered all those forming the road block to disperse. This command was heeded by most except those willing to sacrifice personal freedoms to make their statements against big oil and the continued mindless contamination of mother earth. The following individuals were ultimately arrested by Pine Ridge authorities for failing to obey commands: Debra White Plume, Alex White Plume, Sam Long Black Cat, Andrew Iron Shell, and Tyrel Iron Shell. The arrests were not without effect as the semi-trucks and their payloads were rerouted and escorted off by several Oglala sentries.

The protectors of the earth, all those present who succeeded in making a bold statement were backed by standing resolutions adopted by the Oglala Sioux Tribe and the Black Hills Sioux Nation Treaty Council incorporating the terms of the Mother Earth Accord. Additionally, those standing resolutions forbid any formal interaction with TransCanada and/or Keystone XL or other oil pipelines making overtures to the Oglala Lakota Nation and other landowners throughout the center of Turtle Island (North America).

Lastrealindians was able to catch up with Olowan Sara Martinez and Debra White Plume to piece together the days happening for our readers’ benefit. Olowan Sara Martinez recalled the steadfast manner in which the modern warriors of the Oglala Lakota responded “it’s clear that our people will stand by each other when our land is threatened”, said Martinez. 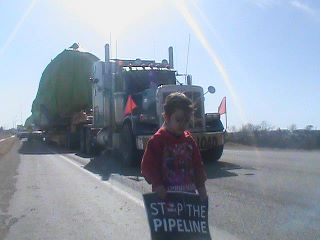 Photo courtesy Native Impact, Kyle, SDDebra White Plume of Owe Aku, Inc. summed up the peoples’ sentiment when she said “It is always good to see that we’re still Indigenous. We will never stop caring for mother earth. When the call went out asking for help, the response was immediate. People from the community of Wanblee – [a major traditional stronghold during the tension and violent filled 1970s between the federally backed goon squads and the American Indian Movement backed traditionals *context provided by Lastrealindians ] poured out in numbers offering huge pots of soup, coffee, and other provisions for anyone willing to take a stand. The people will always help each other.”

Lastrealindians was advised that since Oglala President Steele is currently in Washington, DC on official business, Oglala Vice President, Tom Poor Bear, is calling a meeting of the Tribal Council, today March, 6, 2012, to address the roadblock circumstances and any future occurrences of this sort. The Oglala Tribal Council and In-house attorneys are drafting legislation to prohibit heavy trucks from coming onto the reservation as this writing happens; “It does not matter what trucks are carrying, if they are this big and heavy they are too dangerous for our roads”, Debra White Plume reiterated. Lastly, the Oglala Tribal Council will consider legislation prohibiting any vessels or equipment to be used in Tarsands oil development from crossing Oglala Territory.

This article was originally published at Lastrealindians.com. Republished with permission