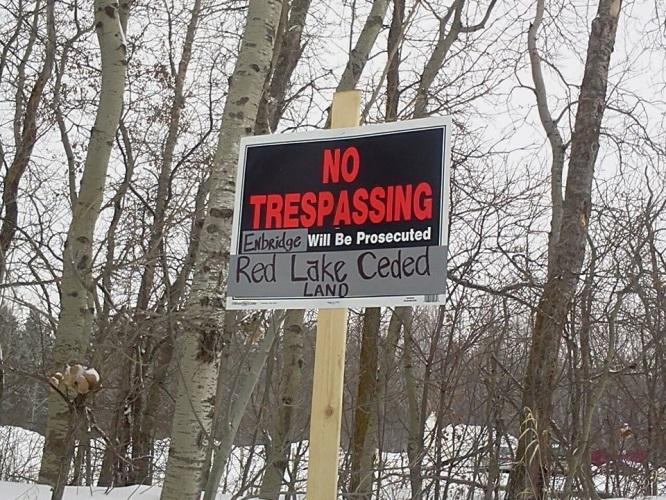 To the southwest of the Red Lake Anishinaabe Nation, lie desolate, wooded lands that were opened for settlement and home-steading under the Agreement of 1889. In 1945, Oscar Chapman, Assistant Secretary of Interior, signed an Order of Restoration that restored unsold ceded lands of the Agreements of 1889 and 1904 to the Red Lake Band. Although most of the southwestern ceded land was sold during 1889 land rush, several areas remained unsold and were returned to Red Lake, including eight acres located outside the town of Leonard, MN.

In 1949, the Lakehead Pipe Line Company built an underground pipeline on the ceded land outside Leonard. Lakehead was the U.S. base of operations for Canada’s Interprovincial Pipe Line Co. (IPL – owned by Exxon predecessor Standard Oil of New Jersey). Other Lakehead pipelines followed in 1958, 1962, and 1972. In 1998, IPL changed its name to Enbridge Inc., a name that combined “energy” and “bridge.”

In regard to Red Lake, Cobenais’ Enbridge Expansion Fact Sheet pointed out that “the Red Lake Nation has not signed any easements or agreements with Enbridge, the company trespassed and illegally constructed and maintained pipelines on Red Lake ceded lands.

“In 2011, this issue was brought to light and the Red Lake Tribal Council…has considered several options, including signing an easement with a mutually agreed upon payment, charging Enbridge with trespassing, injunctions stopping the flow of the oil in the pipelines and, removal of the pipelines from the ceded land altogether.

“Red Lake, Leech Lake, and Fond du Lac land and waters are or will be impacted by the pipelines and therefore the tribes should have significant input regarding the proposed expansions [of barrels per day]. They have the power to pass resolutions opposing the increase and submit these resolutions to the Minnesota Public Utilities Commission, Department of State, and the Department of Interior.” 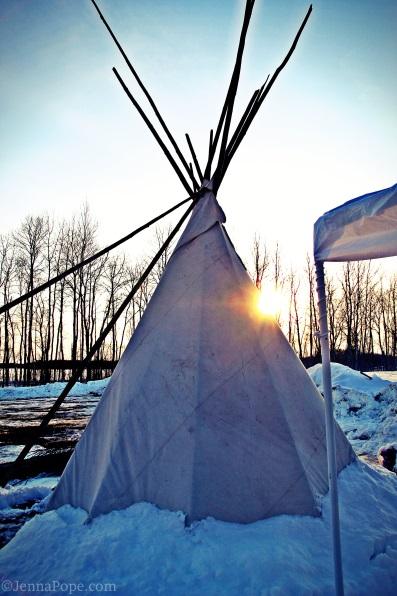 In 2008, Enbridge announced its Alberta Clipper pipeline (Line 67) expansion to connect with its point of origin at Hardsity, Alberta. In 2009, construction began with four spreads, or sections – Neche, N.D. to Viking, MN, Viking to Clearbrook MN, Clearbrook to Deer River, MN, Deer River to Superior, WI.

The 326 mile-long pipeline was completed in 2010 and carries 440,000 barrels per day of DilBit (Diluted Bitumen) from Alberta Tar Sands. Clearbrook, MN, located near the Leonard ceded land site, is a hub for Enbridge’s pipeline operations. Enbridge is in the process of seeking approval to increase its DilBit capacity to 800,000 barrels per day.

In reaction to Leech Lake’s tribal resolution for easement, Leech Lake activists formed In Zha Wen Dun Aki (Loving the Earth). The goal of In Zha Wen Dun Aki was “to bring attention to tribal sovereignty and indigenous rights to the land, as well as to the environmental and health impacts caused by inevitable accidental spills along the route.”

In July 2009, In Zha Wen Dun Aki filed a civil lawsuit in Leech Lake Tribal Court, seeking a temporary restraining order against Enbridge Energy from starting the proposed pipelines on the Leech Lake Reservation. The lawsuit contended that the pipeline would result in irreparable risks to Leech Lake Band’s water and land base.

In September 2009, the RBC rejected the petitions. In February 2010, Leech Lake Judge, B.J. Jones, dismissed In Zha Wen Dun Aki’s lawsuit, citing that the petitioners did not have a Minnesota Chippewa Tribe (MCT) Constitutional right to subject the RBC administrative resolution to a referendum because there were no policies or procedures in the MCT Constitution that outlined how the referendum petition was supposed to work. The MCT is comprised of 6 tribal governments that include the following northern Minnesota reservations: Leech Lake, Bois Forte, Mille Lacs, White Earth, Grand Portage, and Fond du Lac. All of these reservations are currently required to follow the Constitution and By-laws of the Minnesota Chippewa Tribe.

The environmental concerns of Anishinaabe activists regarding Enbridge were not unfounded. Enbridge oil spills affected, and continue to affect, the homelands and ceded lands of the Anishinaabe. According to Enbridge company data collected by the Polaris Institute, a Canadian think tank, Enbridge pipelines have spilled 804 times since 1999 and leaked 6.8 million gallons of oil. In Minnesota, there were 57 Enbridge spills from 2000 to 2009 with $36 million in property damage.

A partial record of spills include:

January 2001: A seam failure on a pipeline near Enbridge’s Hardisty Terminal in Alberta spilled more than 1 million gallons of oil.

July 2002: An Enbridge subsurface pipe at Cohasset, MN ruptured and released 250,000 gallons of crude oil into the environment. The Executive Summary by Natural Resource Trustees stated: “The Trustees have determined that the Incident caused long-term injuries to wetland vegetation and wildlife habitats. It has also been determined that the Incident caused injury to air resources.” Leech Lake land was affected by the spill.

January 2003: About 189,000 gallons of crude oil spilled into the Nemadji River from the Enbridge Energy Terminal in Superior, Wisconsin

November 2007: Two workers were killed in an explosion that occurred at an Enbridge pipeline in Clearbrook, MN.

April 2010: At Deer River, MN, 250 gallons of crude oil leaked out from an Enbridge pipeline of into a wetland area located on the Leech Lake reservation.

July 2010: A cracked and corroded pipeline in Michigan ruptured, sending more than 843,000 gallons of crude oil into the Kalamazoo River, a major state waterway that flows into Lake Michigan. The spill stretched for some 35 miles, fouling waterways and wetlands. About 320 people reported symptoms from crude oil exposure.

March 2012: A vehicle collision resulted in a leak of Enbridge’s 14/64 at New Lenox, Ill. Line 14/64 carries crude oil from Superior, WI to Griffith, Ind. The Illinois Emergency Management Agency estimated between 2,500 gallons to 20,000 gallons leaked from the pipeline before the valves were shut off.

On February 21, Marty Cobenais held a meeting with Red Lake members of Nizhawendaamin Inaakiminaan (We Love Our Land) Native, and non-Native supporters at the Bemidji Eagles Club and decided to make their move and occupy the ceded land site at Leonard. On the 27th, Cobenais issued a list of camp rules: 1.) No drugs; 2.) No alcohol; 3.) Be peaceful; 4.) Be law abiding; 5.) Be respectful.

On the morning of the 28th, Cobenais sent out a message:

“Today is the day. Enbridge Energy has been on the Red Lake Reservation since 1949. There has never been an easement for this land, so Enbridge has been trespassing on our ceded lands since then. This peaceful protest is against Enbridge Energy. We are going to occupy the land starting at 10:30 this morning. We plan to camp on this land until the pipelines cease to pump oil through them.”

It was a clear, cold morning when they reached the desolate, snow-covered site outside Leonard, MN. The small town of Leonard, with population of 41, is an Enbridge town. Most of town residents work for Enbridge.

High overhead, a migizi (bald eagle) flew to greet them. One of the concerns of the group was the possibility of arrest for trespassing. Under Red Lake tribal code, Native and non-Native supporters could be removed at any time. Red Lake members could only be removed through order of the tribal chairman. No one knew how the Red Lake Tribal Council would react in regard to the group occupying the ceded land site.

According to Cobenais, Red Lake Chairman Floyd “Buck” Jourdain called him the night before the occupation and told Cobenais that he had received a letter from Enbridge that requested occupiers be arrested if they drove over the pipelines or had a fire over the pipelines. Jourdain indicated he would abide by the letter.

When a helicopter approached the site, some thought arrests were imminent. However, the helicopter was piloted by an Enbridge employee. He landed the ‘copter and met with the group. He apologized for not having asemaa and offered coffee instead. He said he was from Canada and supported the struggles of First Nations there.

Shortly after, Donald May, Red Lake District Representative, arrived, accompanied by two Red Lake Tribal Police officers. May stated that the tribal council was aware of the pipelines and they were on Red Lake land illegally, and the council wanted them removed. He said efforts to remove them would take time and needed to go through the legal process.

Chairman Jourdain also emphasized the tribe’s position following his State of the Band address in Minneapolis on March 2. According to an anonymous source who spoke with Jourdain after the address, Jourdain said tribe had been working on the pipeline issue for two years and they explicitly told Enbridge to remove the pipelines in August 2012. Enbridge never responded so now the tribe was in court.

In an email to the Bemidji Pioneer, Jourdain reemphasized the tribal council’s position. He added that the protest was not sanctioned by Red Lake Nation.

In the same article, Enbridge responded that they had no objections to the protest. Regarding the issue of easements, Enbridge spokesperson Becky Haas said: “Enbridge went through the proper channels to acquire easements, permit, construct and operate the pipelines on this parcel of land, the first of which was constructed in 1949.”

As defined, an easement is a legal interest in real property authorizing a person to use the land or property of another for a particular purpose and; Landowners are paid a fair price for the easement and can continue to use the land for most other purposes, although some restrictions may be included in the agreement.

Both Jourdain and Cobenais point out that Enbridge never applied nor received approval for easement at the ceded site at Leonard. Enbridge has yet to produce documents to prove easement.

Cobenais has emphasized that the Enbridge Encampment is not a blockade. He said the focus of the encampment is to draw attention that Enbridge is illegally on sovereign Red Lake land, and to encourage a dialogue between Enbridge and the Red Lake Tribal Council to resolve the issue of removal of the pipelines.

Originally, the goal of the encampment was to hold the ground for 72 hours. It was believed that Enbridge would shut down the oil flow after 72 hours as a safety regulation. After the time period passed, the oil continued to flow. Cobenais said Enbridge chose not to initiate the 72 hour regulation.

Since its inception, the Enbridge Encampment has grown. In addition to firewood, supporters have brought gifts of manoomin (wild rice), ogaawag (walleye) waawaashkeshiwi-wiiyaas (venison), and other essential foodstuffs. A nisawa`igan (tipi), gischitwaa-ishkode (sacred fire), and maskhkiki-mitig (medicine pole) have been erected over the pipelines.

Cobenais said: “Spirits are high, and we are strong. This oil must stop flowing and these pipes must be removed.”

“I ask that all the people that are commenting about the occupation on the Red Lake Nation land that we all remember that Enbridge Energy is the enemy. The Red Lake Tribal Council supports us,” he said.

Cobenais also expressed the importance of solidarity – the support and encouragement for the Enbridge Encampment from Idle No More, Occupy and Tar Sands groups across Turtle Island. 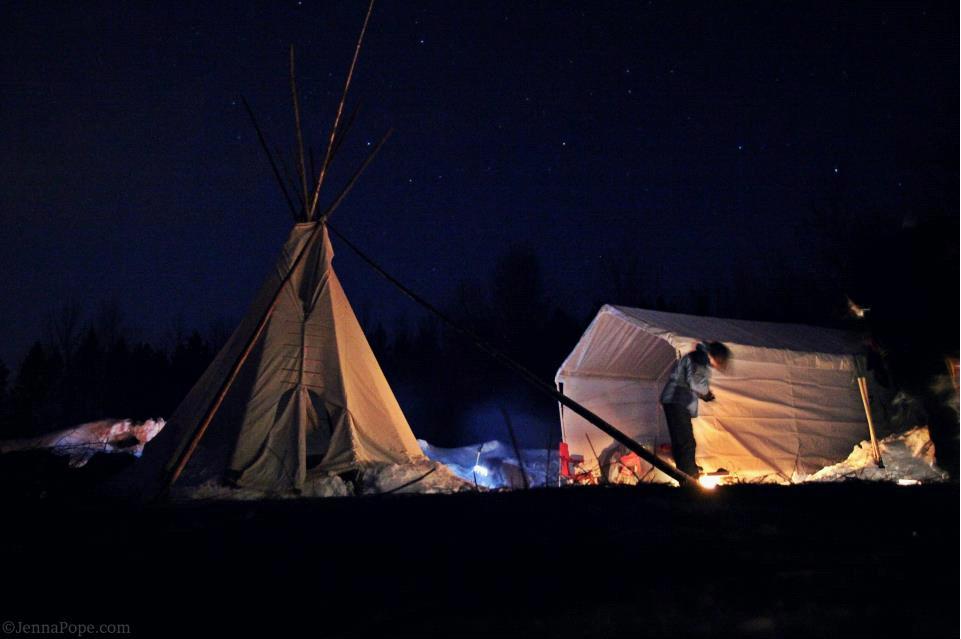