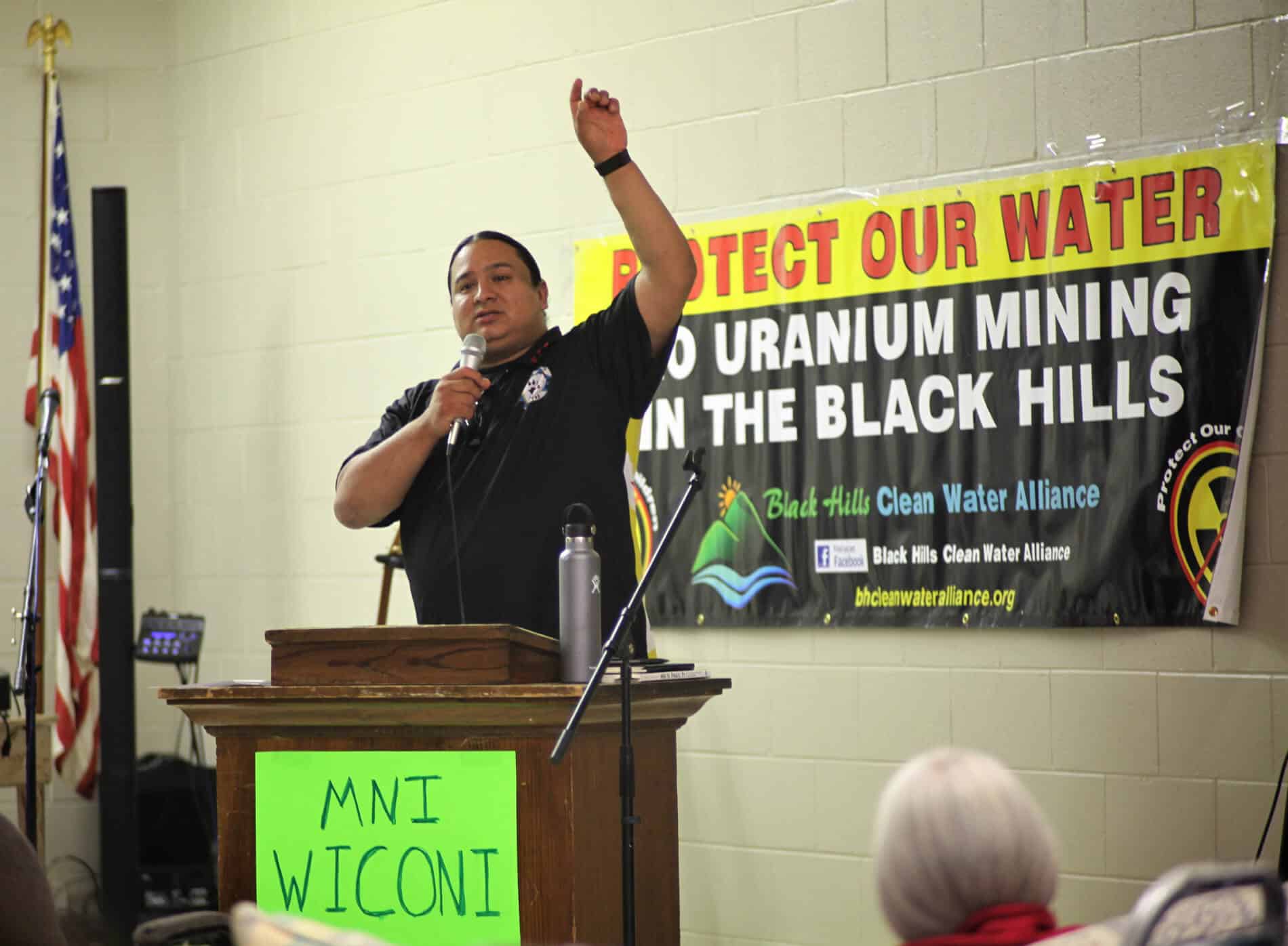 DENVER – As of Nov. 17, all 63 written comments the U.S. EPA had received from tribal and other submitters opposed granting water permits for the slated Dewey Burdock uranium mine and mill in the southern Black Hills.

If permitted, the operation would become the first radioactive in situ leach (ISL) mining in South Dakota. It would be located on 10,000 acres of Custer and Fall River counties adjacent to the Pine Ridge Indian Reservation and upstream at the headwaters of the Cheyenne River.

“There need to be government-to-government consultations with the tribes on the Dewey Burdock Project. All the bands of the Oceti Sakowin, or Seven Council Fires of the Great Sioux Nation, have tribal resolutions in place in opposition to any uranium mining in unceded 1868 Ft. Laramie Treaty territory, which overlaps a five-state area, including the entire Black Hills,” said one commentator.

“The water will inevitably become contaminated as, indeed, the Nuclear Regulatory Commission finding states ‘the restoration of an ISL-mined aquifer to pre-mining water quality is an impossibility’. Don’t allow this!” the commentator concluded.

The in-situ technique leaches uranium from ore by injecting chemicals into the underground water table to dissolve the deposits. Pumps then force the minerals in solution through pipes to the surface. There, the radioactive material is refined into yellow cake for shipment to nuclear fuel and weapons manufacturers. The wastewater is disposed either on the surface or back underground.

The EPA’s Denver branch office is in charge of the applications for an exemption from compliance with the quality standards of the Clean Drinking Water Act and for two permits to punch some 4,000 new injection well holes in the aquifers for this process. The applicant is Canadian Chinese Azarga Uranium Corp., doing business as Powertech USA Inc.

As it stands, the draft well permitting provides 8,500 gallons per minute of public water free-of-charge for mining and disposal indefinitely, directly affecting the Inyan Kara and Minnelusa aquifers.

The Northern Cheyenne Tribal Historic Preservation Office wrote the EPA, taking issue with the applicant’s request to be exempted from water quality standards.

“The aquifers are essential to the well-being and continued cultural connection area tribes with ancestral ties to the area continue to maintain,” said the Northern Cheyenne. “A decision to approve this permit would cause irreparable harm to the cultural landscapes and quality drinking water that is pertinent to the livelihood of humans, plant and wildlife resources of the land,” the THPO submitted.

“It is inevitable that the waste fluids will eventually seep into the soil and contaminate the aquifers. Additionally, cultural resources located on the landscapes where mining activities occur are in danger and are threatened by a foreseeable adverse impact to all elements that define the cultural landscape,” the submission states.

“Finally, it is essential that all consulting tribes are given the opportunity to participate in the identification of cultural resources that have not been identified by tribes, as well as to address the implications this project will have on various resources of religious and cultural significance to their nation,” it concludes.

Another submitter said, “As a physician, I concur with the South Dakota Medical Association, which has adopted a resolution opposing any uranium mining in the state. This position is based on the inherent risks when even the best practices are employed in the extraction, processing and transportation of radioactive materials.

“Even small increments above background radiation exposure are potentially dangerous to humans and other life forms (including human food sources),” the physician said. “In addition, the permanent disruption of heavy-metal ion concentrations in affected aquifers is not acceptable in view of potentially worsening water shortages in this semi-arid region, where non-standard water sources may need to be recruited in the future.”

Yet another commentator introduced himself, saying, “My name is Dr. Andy Johnson. I live in Spearfish, S.D. I am a physics educator. My expertise is in how to teach radiation literacy.”

He warned that “any exposure to radionuclides introduces mutations into a population. Some of the mutations will have health costs. We can’t estimate the total cost of this additional genetic burden within a community due to added radionuclide contamination due to mining activities. But it will be huge, because these costs will be borne by Americans for many generations.

“Radiation causes genetic damage in populations,” he explained. “In 1955, Nobel Laureate Herman Muller estimated that the genetic burden due to deleterious radiation-induced mutations will take between 20 to 40 generations to clear from the gene pool,” he noted. “Permitting a uranium mine adds this burden to future populations.”

Much of Professor Johnson’s argument went to the issues of future desertification and past Native American heritage. He said the EPA is “legally obligated to withdraw its draft permits, and restart by negotiating with the Lakota, Dakota, and Arapaho Nations, which are parties to the treaty of 1868.

“Because it hasn’t taken the treaty into account, EPA’s permitting process is in violation of federal law,” he stressed. In summary, he said the EPA “must withdraw the permits that are the subject of these hearings and begin the process with full regard to tribal sovereignty, the known upcoming challenges of climate change, and realistic considerations of the health of affected populations.”

The EPA revised and reissued the draft permits in 2019 after the first round of comments on them in 2017 drew more than 90 percent opposition to the project. At a hearing on the reissued drafts in Hot Springs on Oct. 5, 100 percent of speakers voiced opposition.

The agency extended the deadline for the current round of written comments from October until Dec. 9, in response to other commentators’ requests for more time. However, it is not known to ever have denied water permits for ISL mining.

As a result, the Black Hills Clean Water Alliance put out a call on Nov. 17 for more comments. “Please take a few minutes and add your voice! Short comments are fine,” it said.

The EPA says it also seeks public comment on historic and traditional cultural properties, as well as on its revised draft environmental justice analysis.

The agency has provided a table summarizing the substantive changes it has made on the proposed permits, available on their website.