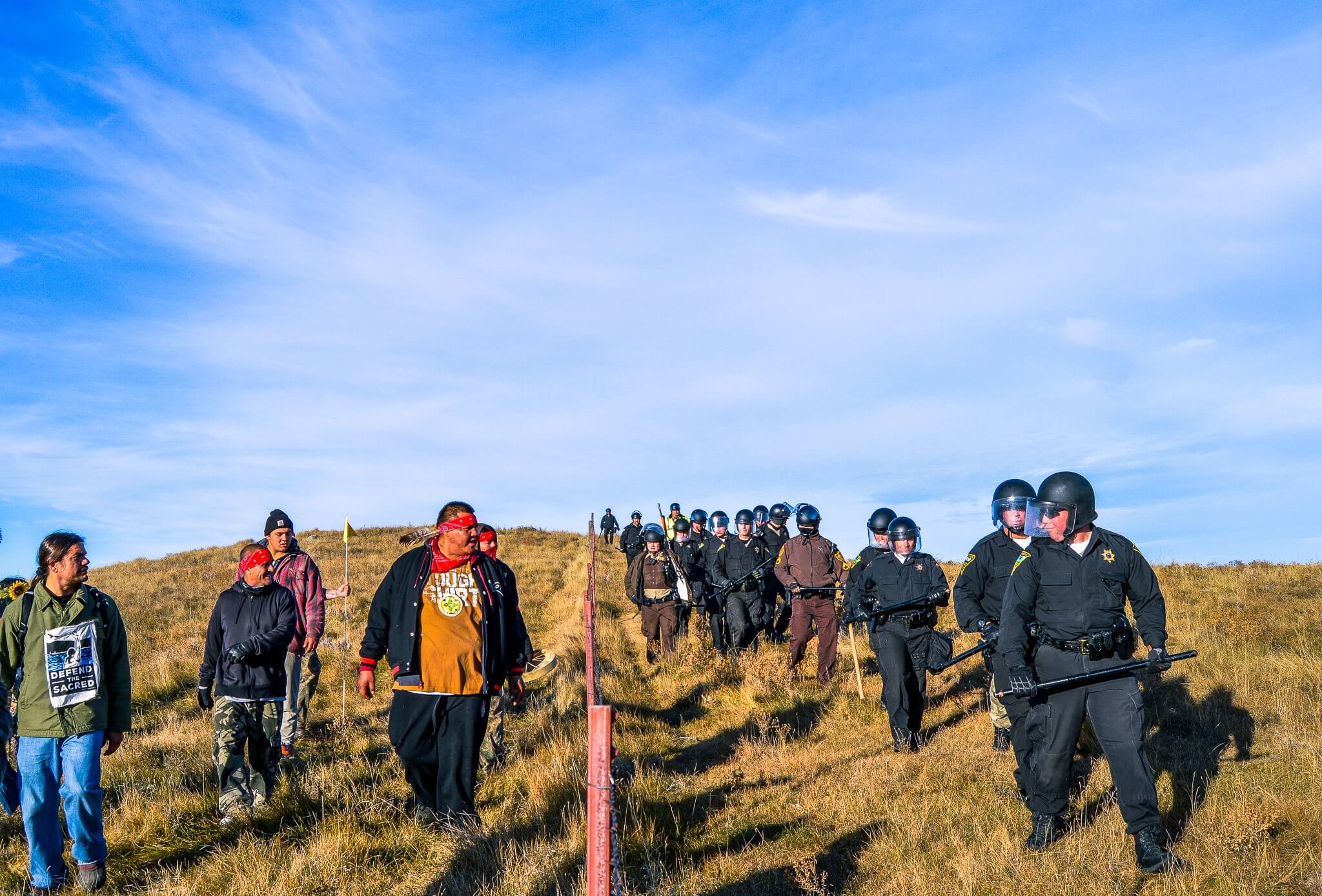 On Saturday, hundreds of water protectors from different nations were met with violence by militarized police in riot gear, and approximately 141 were arrested. Four protectors locked themselves to a disabled car at an active construction site, stopping construction for approximately 7 hours. Then a peaceful procession of hundreds walked to the sacred sites intentionally destroyed by Dakota Access LLC on September 3rd.

The sage and songs of hundreds of Native men, women, children, and elders were peaceful and prayerful despite Morton County Sheriff Kirchmeier’s allegations of violence and lawlessness. After receiving a dispersal notice, a large group of protectors, including elders and children, attempted to leave but were surrounded by police. Law enforcement began to spray mace and throw people to the ground without provocation. One young woman of the International Indigenous Youth Council was injured when a police officer hit her wrist with a baton.

Two members of the press were targeted for arrest and had their equipment was confiscated while police officers pointed rifles at the crowd.

Due to a lack of space to hold the 141 arrested, Morton County sent protectors to several county jails, including Mercer, Cass, Stutsman, Lake Region, Stark, and McLean counties. Arrestees continue to report being strip searched for misdemeanor charges.

One of those protectors, long-time land defender and justice advocate Michael Bowersox stated, “I am taking this action to stop the Dakota Access Pipeline from plowing up sacred sites that are here, near the Missouri River. I’m also taking this action to protect the water and for the future generations in alliance with and an accomplice to the first people of this nation.” Bowersox went on to call for more protectors, “I hope other people will step up to stop this pipeline from being built; we can’t be dependent on fossil fuels if we expect the children seven generations from now to have a healthy earth, environment, and clean water to drink.”

Another protector, Chepa Cubias, said, “I engaged in this action as part of my responsibility to my mother. If you see your mother violently attacked you run to put your body between her and the violent perpetrator. [Dakota Access was] right on burial grounds sacred to my Lakota relatives. As Native folks we understand more than the right to clean water, we have the responsibility to keep water clean. That’s why we need to listen to the caretakers of the land that are here to protect it. It is our responsibility!”

LaDonna Allard, a Standing Rock Sioux tribal member who founded the Sacred Stone Camp, spoke of the sacred sites people are trying to protect, “There are sacred sites, cultural sites, traditional cultural properties, and burial sites that the State Historical Society knew of – they should’ve followed the law and must protect these sites. But they are pushing the sites under the rug and no one is talking about it. There’s the executive order protecting sacred places – E.O. 130007, NAGPRA, ARPA, and the NHPA that are supposed to protect these sites. AIRFA is supposed to give Natives the right to visit these places. To the North Dakota SHPO: just because you accepted the money from the oil company does not mean you have the right to violate our rights. No one has the right to take our footprint off the earth.”