No Toxic Dump on O’odham Land! 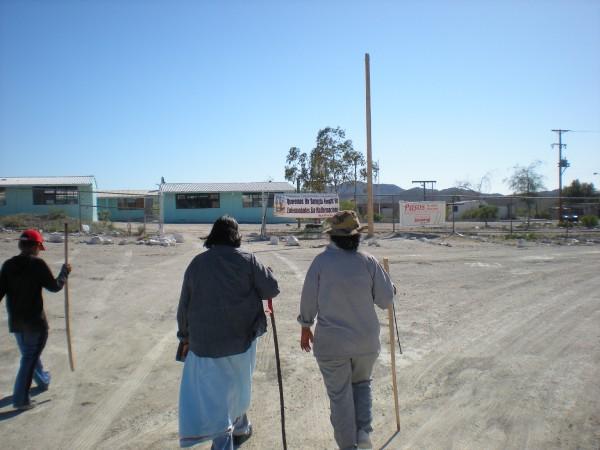 On March 29, Traditional O’odham leaders and International Supporters gathered in the small village of Quitovac in Sonora, Mexico, to organize against a toxic waste dump that threatens one of the O’odham’s most sacred Ceremonial sites.

“The gathering in Quitovac represented yet another chapter in the fight to stop the building of the toxic dump proposed to be built by the Mexican company CEGIR,” wrote the O’odham Solidarity Project shortly after the gathering came to a close.

“Since early in 2006 the traditional O’odham residing in the occupied territories of Northern Mexico and the South Western United States (and their international supporters) have persistently and patiently organized, protested and petitioned to try to convince the Mexican government federal Environment and Natural Resources Secretariat (SEMARNAT) and the United States Environmental Protection Agency (EPA) to stop CEGIR from building this toxic dump. So far, protest and international attention has held back the initial phases of the dump construction, but there have been no official statements from SEMARNAT, CEGIR or any other entity that the plans to build the dump have actually been officially canceled.”

The goal now, is to bring that cancellation. O’odham Solidarity continues,

The toxic waste that will be put into this dump, should we fail to stop its construction, will be generated primarily by the maquiladoras along the border. These factories, made possible by NAFTA, are violating the human rights of those who work in them, and are now seeking to violate the sacred waters of Quitovac, all to satiate the consumer sickness and the greed of the US corporations who profit from the human misery and environmental destruction that they wreak.

It has been said before, and it must be said again – everything is connected. No one is exempt from the cycles of nature. We must all take action now to stop this dump from being built!

The O’odham Voice Against the Wall, the O’odham Solidarity Project, Green Action, the Indigenous Environmental Network, the International Indian Treaty Council, and many other organizations and individuals are aware of this issue and will be taking action each in their own way!

O’odham Solidarity asks you to “please write letters to the officials listed on the Green Action website and to sign the online petition being circulated. In the past we have won concrete victories using these basic tactics. Let’s hope that this time, once again, nothing more will be needed!”

2. Go to Green Action for Government officials to contact. They have some additional information as well.

We oppose the destruction of the natural habitat of this entire ecosystem, plant life, animal life, waterway and mountains. The effects of solvent chemicals are fatal to all life and will impact future generations of human life, animal life and plant life. By our O’odham Him’dag, our principles, the O’odham way of life, maintains all life is connected and any destruction impacts the entire O’odham culture and very existence of O’odham and all life.

We oppose this outright threat to our O’odham way of life by storage of hazardous chemical in our sacred lands and near our scared ceremonial grounds. An historic example, of the Hecla Mining Company, unprotected cyanide leaching ponds leak in Quitovac. An absent monitored system and very lenient enforcement of environmental policies places all life at great risk. As O’odham we maintain our legacy through our oral history, as the original peoples of these lands. Through our teachings by our Elder Brother I’itoi we maintain our inherent way of life including conducting our ceremonies and making offerings to the lands and the sea, as well as using all life in the region as our food source, medicinal source from the plant and animal life which is all face irreparable danger.

We demand the strongest implementation of existing environmental and cultural protection laws to stop this project and demand protection of O’odham and all life in this region. The planned devastation of the region is in total neglect to humanity and the natural life. Environmental ethics have been disregard without regard to the future generations of the O’odham communities and surrounding communities.

We hereby submit this statement to all concerned.