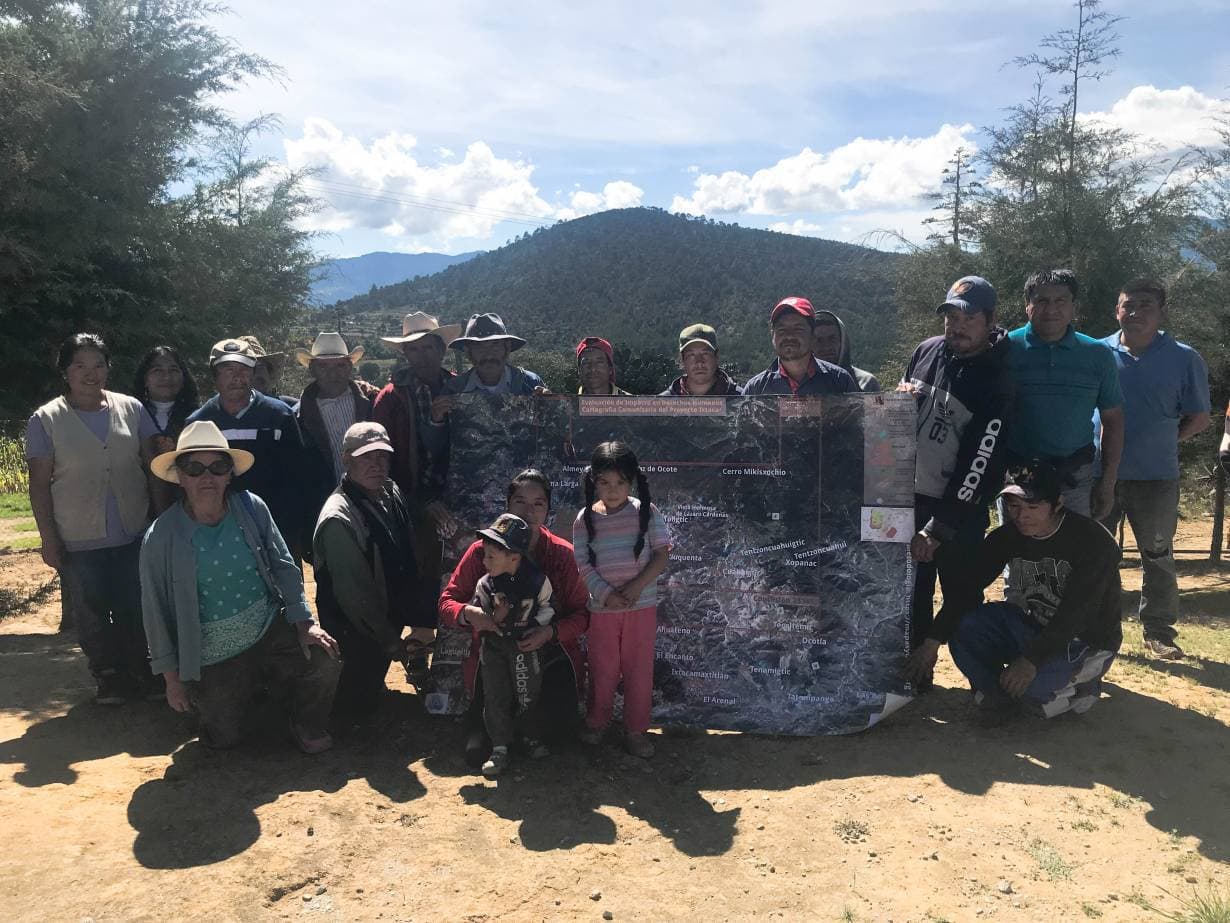 Residents of Tecoltemi indigenous land pose for a photo with a map of a mining project threatening their land in the town of Ixtacamaxtitlan, Mexico, Oct 30, 2018. THOMSON REUTERS FOUNDATION/Karla Mendes
Support our journalism. Become a Patron!

IXTACAMAXTITLAN, Mexico – After nearly 20 years of wrangling, a group of Nahua Indian villagers could make legal history in Mexico this month when a court rules on a land dispute involving a Canadian miner.

A lawyer for villagers of Tecoltemi in the central Mexican state of Puebla said it was the first time a court would rule on whether the country’s mining law – which gives priority to mining activities over other land use – was constitutional.

Previous cases had only recognized indigenous people’s right to prior consultation, said Itzel Silva of the Fundar Centre for Analysis and Research, a non-profit in Mexico.

“That’s why this case is so important,” said Silva.

For a century Mexico has granted indigenous people legal title to ancestral lands, but many have seen mining firms given rights to that land after the government prioritized mining over other land use in the 1990s, lawyers said.

The case, to be heard in a federal court in Puebla, concerns two concessions awarded to Minera Gorrion, a local subsidiary of Canada’s Almaden Minerals, which has caused divisions among villagers while pitting some against the company.

It was filed against the economy ministry – which is responsible for mining – on behalf of some villagers, who say exploration activity on gold and silver deposits has contaminated local water sources.

The ministry did not respond to several requests for comment. A spokesman for Minera Gorrion said in an email the company has abided by rules set by environmental regulators, who had found no irregularities.

Almaden Minerals did not respond to repeated requests for comment. Minera Gorrion said the Canadian company would only comment on the project through its Mexican subsidiary.

Silva said a ruling for the villagers – who live high in the Sierra Norte mountains – could set a precedent for other claims to try to overturn the law that prioritizes mining over other land use.

Mexico is the world’s top silver producer and one of the largest producers of copper and gold. The mining sector contributes about 4 percent of Mexico’s gross domestic product.

Boundaries of both concessions overlapped land claimed by residents of Tecoltemi near the town of Ixtacamaxtitlan, which lies about 140 km (90 miles) east of Mexico City.

Indigenous leader Victor Martinez Lobato said villagers were not consulted on the two concessions and their impact.

“The effects (of mining) on the air, on the water, worry us,” said Lobato, pointing to a map showing the concessions.

In 2015, the Fundar centre sued the economy ministry on behalf of the Tecoltemi villagers. The court in that case ordered that any changes to the concession boundaries be suspended until the federal court issued its ruling.

The following year, Minera Gorrion decided it would hand back to the government about 17,000 acres around Tecoltemi, it told the Thomson Reuters Foundation by email, on the grounds that it had not conducted any mining activity there.

Minera Gorrion said it had acted “in good faith” and responded to the community’s request by relinquishing land.

It added that the Ixtaca mine would bring “economic benefits to the community, Puebla state, and the country” and that it expected to invest over $1.5 billion in running the mine and hire more than 1,000 local workers.

Silva said many mining concessions in Mexico are unconstitutional because the government fails to consult over ancestral land with indigenous people – who make up nearly one-quarter of the population of 120 million, according to government data.

In Ixtacamaxtitlan in Puebla state, official data shows about one quarter of 25,000 inhabitants are indigenous, but campaigners said mining concessions have been issued over about 90 percent of its 150,000-acre territory.

The most controversial project in Ixtacamaxtitlan involves the Santa Maria Zotoltepec indigenous village, 10 km from Tecoltemi, where Minera Gorrion wants to mine gold and silver.

But she “never agreed with it”, she added, as she wrote “No to the mine” on a poster to display at an upcoming meeting between the company and local people.

Diana Perez, a lawyer at the Mexican Institute for Community Development who acts on behalf of the villagers, acknowledged the community was split over mining in the area.

“Employment … dictates who is in favour or against the mine,” she said.

Minera Gorrion said it is “understandable that a project like this can generate doubts but we did not perceive a mood of disagreement or against (the mine)”.

A 2016 report by PODER, a local non-profit, found that exploration activity in Ixtacamaxtitlan had contaminated water sources, threatening the community’s supply.

“The company carried out water monitoring without due authorizations and made drill holes deeper than allowed, affecting the water table,” said Isabel Clavijo, a researcher at PODER.

Minera Gorrion denied that and said it was committed to protecting the environment.

Morales said she was worried about water and the region’s other natural resources if mining activities were not stopped.

“We have been here for centuries, since before the passage of (the Spanish conquistador) Hernan Cortes in 1519 … This project is temporary. Once it is over, what comes next?”

This article was originally published by the Thomson Reuters Foundation. It has been re-published on IC with permission.