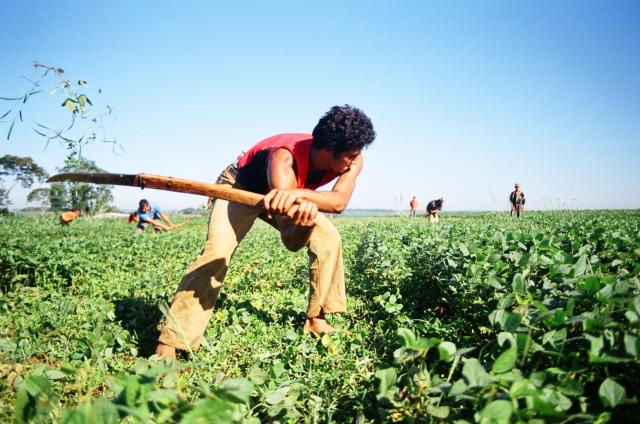 No Such Thing As Responsible Soy

Made up of representatives from ADM, Bunge, Cargill, Shell, ABN Amro and the WWF, among others, the RTRS is currently gathered in Buenos Aries to develop policies that encourage “responsible soy,” a prospect they consider while ignoring “the very nature by which soy monoculture is produced, taking up vast swaths of land throughout South America, using massive amounts of water resources, depending upon chemical and synthetic fertilizers and pesticide inputs, and leaving a trail of contaminated and/or displaced communities in its wake,” notes Andrea on the RAN blog. “This precludes it from ever being classified as responsible.”

The Joint Statement against the 3rd RoundTable on Responsible Soy reiterates this in no uncertain terms:

Agribusiness is responsible for the devastation of our soils, deforestation, contamination of rivers and aquifers, biodiversity loss, and the plunder of the natural and cultural heritage which once supported our communities. The expansion of soybean monoculture threatens the territorial, cultural and food sovereignty of countries as well as the rights of the Indigenous and rural communities. Soy agribusiness excludes, impoverishes and weakens the population. This industrial agricultural model violates economic, social, cultural and environmental rights and, as it expands, its destructive methods of operation wipe out everything in its path, resulting in rural migration, marginalisation of rural populations, and ultimately the criminalisation of the poor and social movements.

In spite of this, the soy agroindustry is actually expanding and becoming stronger through the growing markets for processed foods, industrial livestock farming, and the production of agrofuel crops that will purportedly ‘save us from climate change’. The reality is that the hidrovias (waterways) which are part of IIRSA[ii] are expanding, new rail networks are appearing, more GM crops are being grown and more pesticides and machinery is being imported to speed up the land clearing process.

Agribusiness expands more and more, and many European Governments respond to criticisms and complaints about the current situation in our countries by blindly and naively trusting WWF´s [World Wildlife Fund] Round Tables for Sustainable Business. We are dismayed that they are following it as being successful examples, specifically towards the creation of new legal criteria for the sustainable production of biofuels[iii]. By doing this the EU Governments will fall into the trap of corporate greenwashing.

Social movements from the North and the South reject outright all attempts by corporations and NGOs to mobilize public opinion in support of their notion of sustainable or responsible GM soy monoculture[iv]. We disapprove of the projects of corporate social responsibility (CSR) that, through roundtable dialogues and voluntary measures, attempt to cover up the crimes committed by the corporations. Through CSR, corporations try to usurp the State and create private social policy making.

We resist the agribusiness model of neo-colonial domination and the way in which corporations systematically misrepresent distort many of our own social movement discourses and statements. We denounce the corporate greenwashing of the niche market of certification.

For background and more information, please visit www.aseed.net and lasojamata.org.