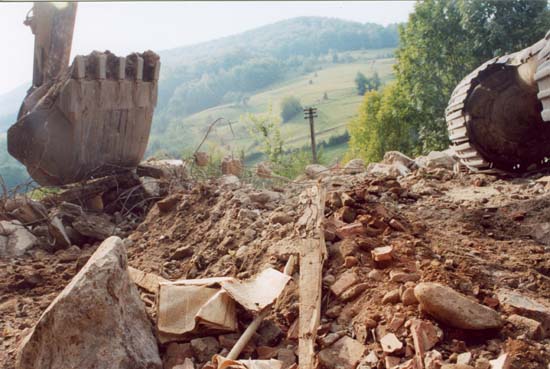 No Gold Future in Rosia Montana

Beneath the village of Rosia Montana, located in west-central Romania, there lies a massive deposit of gold ore–over 300 tonnes. The village has been living on top of it for over 2000 years now; but today the village, indeed the entire area is threatened. Canada’s own Gabriel Resources wants to turn it into Europe’s largest open-pit cyanide mine.

If all goes as planned, 2000 people will be relocated; and 5 mountains, 10 Churches, 12 Cemeteries and 958 farms will be destroyed. On top of that, a cyanide lake will be made of a valley neighboring Rosia Montana.

Some are welcoming the mine, however, because it will ease the high level of unemployment and poverty in the village; but a number of people are altogether opposed to it.

It’s not just because of the destruction and displacement or the loss of 2000 years of history and culture. It’s also because of the intended use of cyanide… You see, an environmental catastrophe occurred at a nearby mine five years ago, which is still fresh in the minds of many. A dam ruptured, unleashing cyanide sludge into the local river system, contaminating the drinking water of millions of people, and killing more than 1200 tonnes of fish. Obviously, no one wants this to happen again.

This mine will actually improve the environment
Another side of the story comes in the form of propaganda. Apparently the company put out the film “Mine your own business” which among other things, claims environmentalists (like Greenpeace) are anti-human and want to stop Romanians from ‘developing.’

Proponents of Rosia Montana Gold mine also claim “Gold Futures” is biased, misleading, and leaves out important details. For instance, they say this is not a “David and Goliath” story, because Greenpeace and George Soros are involved. They also say the village of Rosia Montana overwhelmingly wants the mine to go ahead.

Putting the David and Goliath thing aside, I’ve seen no proof to verify the above assertions, but from the video I see the company has claimed the mine will actually “improve the environment–” in addition to help restore the village and alleviate the hardships of poverty and unemployment.

That last point is a reasonable truth; but it’s only going to last for about 15 years (the projected lifespan of the mine) and then Rosia Montana will quickly fall back to where it is today, but with some minor differences: There will be fewer people, a cyanide lake, an irreparably damaged environment… Oh, and no gold…