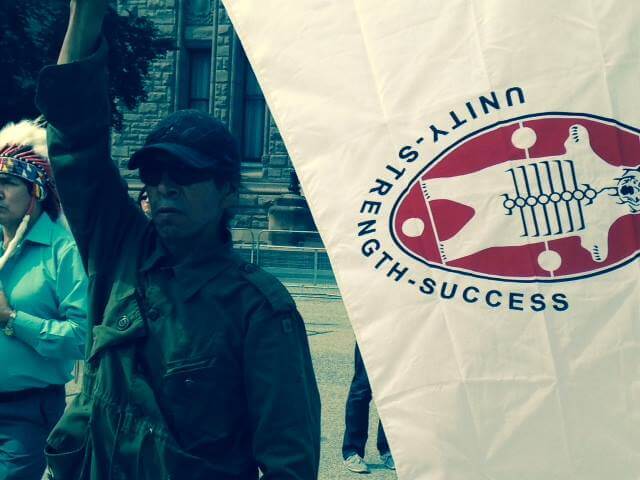 “Proposed resource development is putting tremendous pressure on our lands and First Nations are facing unprecedented challenges and threats to our inherent and Treaty rights,” said Grand Chief Harvey Yesno. “Many communities are struggling to address basic issues such as access to health care, housing, education and economic development. NAN Chiefs have made it clear that we, the people of the land, will defend our right to control development in our territories so that the wealth from our lands continues to benefit and sustain our people and our Nation.”

The Notice of Assertions was adopted by Chiefs at the 40th All Ontario Chiefs Conference last month. It gives notice to all levels of government, industry and the public that First Nations will continue to assert their Inherent and Treaty Rights in traditional territories, and that natural resources remain within First Nation inherent jurisdiction and will be governed accordingly.

“While the governments of Canada and Ontario continue to ignore the spirit and intent of our Treaties, NAN will continue to pursue resource development opportunities with foreign investors and will enter into agreements that respect our rights and bring sustainable, long-term benefits to our communities,” said Yesno. “Far too many of our people have been lost, and no longer will our children continue to suffer under third-world living conditions while governments and industry prosper from the exploitation of our territories. Defending our land will be a legacy to preserve future generations’ fight for justice.”

Recent decisions by the Supreme Court of Canada have sent a strong message that the Crown, as represented by the Government of Canada, must recognize and respect Aboriginal title and deal honourably with First Nations. The principles laid out by these decisions support First Nation rights to control development in our traditional territories and must be respected by industry and all levels of government.

Nishnawbe Aski Nation is a political territorial organization representing 49 First Nation communities in James Bay Treaty No. 9 and Ontario portions of Treaty No. 5 – an area covering two thirds of the province of Ontario in Canada.

FIRST NATIONS IN ONTARIO ASSERTION OF SOVEREIGNTY
NOTICE OF ASSERTIONS

Purpose
By this Notice of Assertions, the First Nations whose territories and lands are within the boundaries of the Province of Ontario (hereafter: First Nations), give formal notice to the Province of Ontario and Canada, to other governments, to resource users and developers, to neighbours and the general public that First Nations inherent and Treaty rights are currently and will continue to be asserted over traditional and historical territory, and ancestral lands. These rights include, but are not limited to, those re-affirmed by Section 35 of the Constitution of Canada and the United Nations Declaration on the Rights of Indigenous Peoples.

This Notice has been adopted by the Chiefs-in-Assembly, comprised of leadership from First Nations throughout Ontario, by Resolution on the date of June 11, 2014.

This First Nations assertion is based upon the Treaties and Covenant Chains established with the Crown. These Treaties were made between sovereign, independent Nations who, based on mutual recognition of obligations, reached agreements.

Like the Constitution of Canada, the Treaties are living and continue to inform our ongoing relationship with other governments. The Treaties impart benefit upon each party, who must also accept the obligations attached to these benefits.

The purpose of the Notice is to assert that these Treaties still govern the relationship between the Crown and First Nations. This Notice does not lay out an exhaustive list of rights; rather, it sets forward several principles and understandings related to lands and resources. This Notice is without prejudice to the rights, titles or claims of any individual First Nation.

Treaties recognize that the lands of Turtle Island have historically been and are currently held by First Nations. First Nations have never ceded title to these lands, as was the understanding of the leaders of the sovereign First Nations who entered the
Treaties. First Nations continue to hold and to assert rights and interests in their original territories and ancestral lands just as prior to any Treaty with the Crown.

First Nations maintain rights to resources within traditional territories.
These resources include, but are not limited to: fish, trees, wildlife, mines, minerals, waters, biological resources, medicines and plants.
First Nations have the right to access, manage and develop these resources.

This is a short list that establishes the basis for parties to engage with First Nations based on First Nations inherent and Treaty rights and jurisdictions. All those seeking to access or use First Nations lands or resources have, at a minimum, a duty to enquire, engage and consult in a manner consistent with the standard of free, prior and informed consent.

First Nations will take appropriate steps to enforce these assertions.