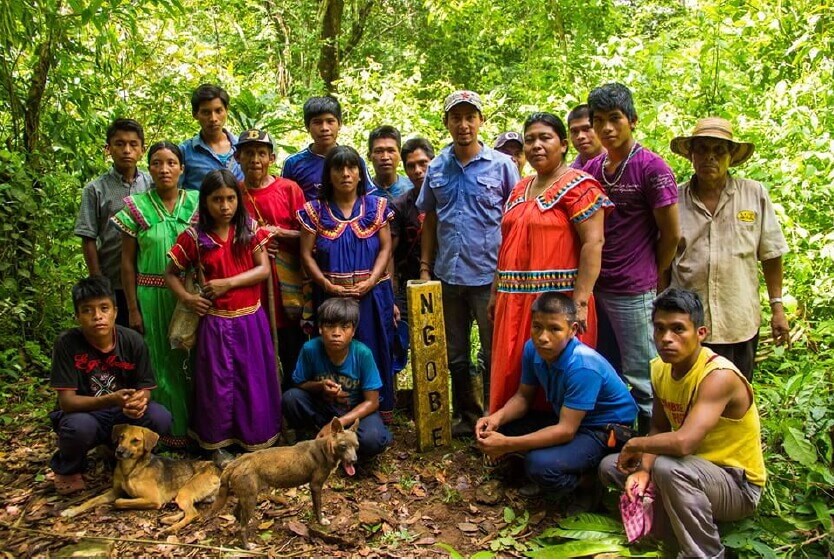 Ngäbe-Buglé movement issues a call to UN, international organizations to save dam-threatened communities

Residents of Kiad around an important boundary post for the Ngabe people at the border of the comarca. (Photo courtesy Duiren Wagua)
Support our journalism. Become a Patron!

Cultural Community of Kiad, Panama — Members of the grassroots indigenous Ngäbe-Buglé group known as The April 10 Movement (El Movimiento 10 de Abril, or “M10”), issued a call to the international community on Wednesday. They ask for an intervention to stop Ngäbe-Buglé communities from being flooded by the Barro Blanco hydroelectric dam.

The M10 called the flooding illegal and a violation of their human rights and the UN Declaration on the Rights of Indigenous Peoples. They refer to an environmental impact statement that failed to acknowledge the presence of the three communities that would be flooded by the project. They also say the agreement that Panamanian President Juan Carlos Varela signed last August with the now-impeached leader Silvia Carrera was illegal, since it was done without the approval of the Ngäbe-Buglé General Congress, and was rejected by the congress in September.

Government representatives met with members of the group in the Cultural Community of Kiad on March 27. It was part of a series of meetings “to agree on options with respect to spaces and points of cultural veneration by communities impacted by the project and the monitoring of water quality studies,”[1] according to an institutional response from the government. Several days later, the water began to rise in the reservoir and has continued to rise until the time of publication of this communique. Community members have still not received communication from the government regarding the rising water levels or a future meeting date.

The community affected by the Hydroelectric Project Barro Blanco, hereby makes public the following facts of the violation of human rights by the Barro Blanco Dam:

1- As has been public knowledge since the beginning of the Barro Blanco project, the environmental impact study denied the existence of the original community that for centuries had lived in the confluence of the Tabasará River, and concessioning this place for the Barro Blanco hydroelectric dam has created a social, economic, cultural, spiritual, and environmental conflict for the community.

2- The government and the Supreme Court of Justice have violated the constitutional and legal precepts of our rights with the implementation of the Barro Blanco hydroelectric plant.

3- We firmly reject the ratification of the Varela-Carrera agreement for the defunct congress presided over by Demecio Case, held between 6 and 9 April 2017 in the northern community in the ñökribo region, in which agreement we played no part. Nor were we consulted about the content of the agreement, and the agreement was not accepted by the population of Llano Tugrí on August 22, 2016 and was rejected in Cerro Algodón on September 15, 2016 by the full General Congress where 148 delegates attended.

4- The highest body of expression and decision, the General Congress, has 255 elected delegates, with full right of decision and for which quorum constitutes 50% plus one; therefore the Norteño decision is illegal, since only 61 delegates attended, in addition to Mr. Demecio Case, who was removed from office on March 7, 2017, in Llano Tugrí, in the ordinary congress.

5- We request the President of the Republic to be a little more respectful of our rights, since any act carried out for the execution of said project has been done violating our legal security, and not only has violated the norms of the Republic, but also violated the Convention and the United Nations Declaration on the Rights of Indigenous Peoples.

6 – We call on the Panamanian population to protect the rights of all before the imposition of the government who makes use of economic and political power and interferes in the decision of the full Congress through the dismissal of Silvia Carrera and Demecio Case.

7- We make an urgent appeal to the national and international solidarity organizations and the United Nations to intervene to protect our rights as peoples most vulnerable to deserved justice in the Republic of Panama.