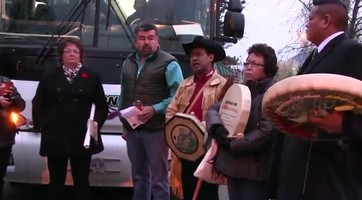 October 31, 2013, Williams Lake, B.C: The Tsilhqot’in Nation welcomes today’s Panel Report on the New Prosperity mine proposal and notes that it contains even more concerns and criticisms than were contained in the 2010 report into Taseko Mines Ltd.’s original proposal. That report was described by then environment minister Jim Prentice as “scathing” and “most condemning” when he rejected the first proposal on behalf of the federal government.

“In 2010 TML and Environment Canada stated the rejected proposal was the least environmentally risky of all options, so it comes as absolutely no surprise that this latest proposal has been found to be worse,” said Chief Joe Alphonse, Tribal Chair for the Tsilhqot’in National Government. “First Nations will be outraged if the federal government accepts this project after rejecting the first one. This report makes it abundantly clear that the only misinformation being put out about this project is the company’s own claims that it has addressed all the issues and that its proposal will present no problems. The federal government now has what it needs to finally put a nail in the coffin.”

“The Tsilhqot’in are en route to the Supreme Court of Canada on November 7th to have our title case heard,” said Chief Roger William of the Xeni Gwet’in First Nations Government. “The Land Question is exactly about avoiding this kind of conflict. There will be no certainty or faith in the environmental review process if bad projects like the New Prosperity Mine get approved despite the overwhelming scientific and cultural evidence against it. Economic arguments did not justify the impacts in 2010 and they won’t in this case either.”

“The company has now been given two chances in the space of three years, which is unprecedented,” said Chief Russell Myers Ross of the Yunesit’in Government. “It is clear that the project is not acceptable. Besides reaffirming the belief in our culture, this project is a waste of time, and should be rejected once and for all. We would rather focus on ideas and projects that are appropriate culturally and environmentally, and therefore meet our vision for the land based on our value system.”

Below is a backgrounder listing the many concerns and criticisms raised by federal and provincial experts and others at the panel hearings.