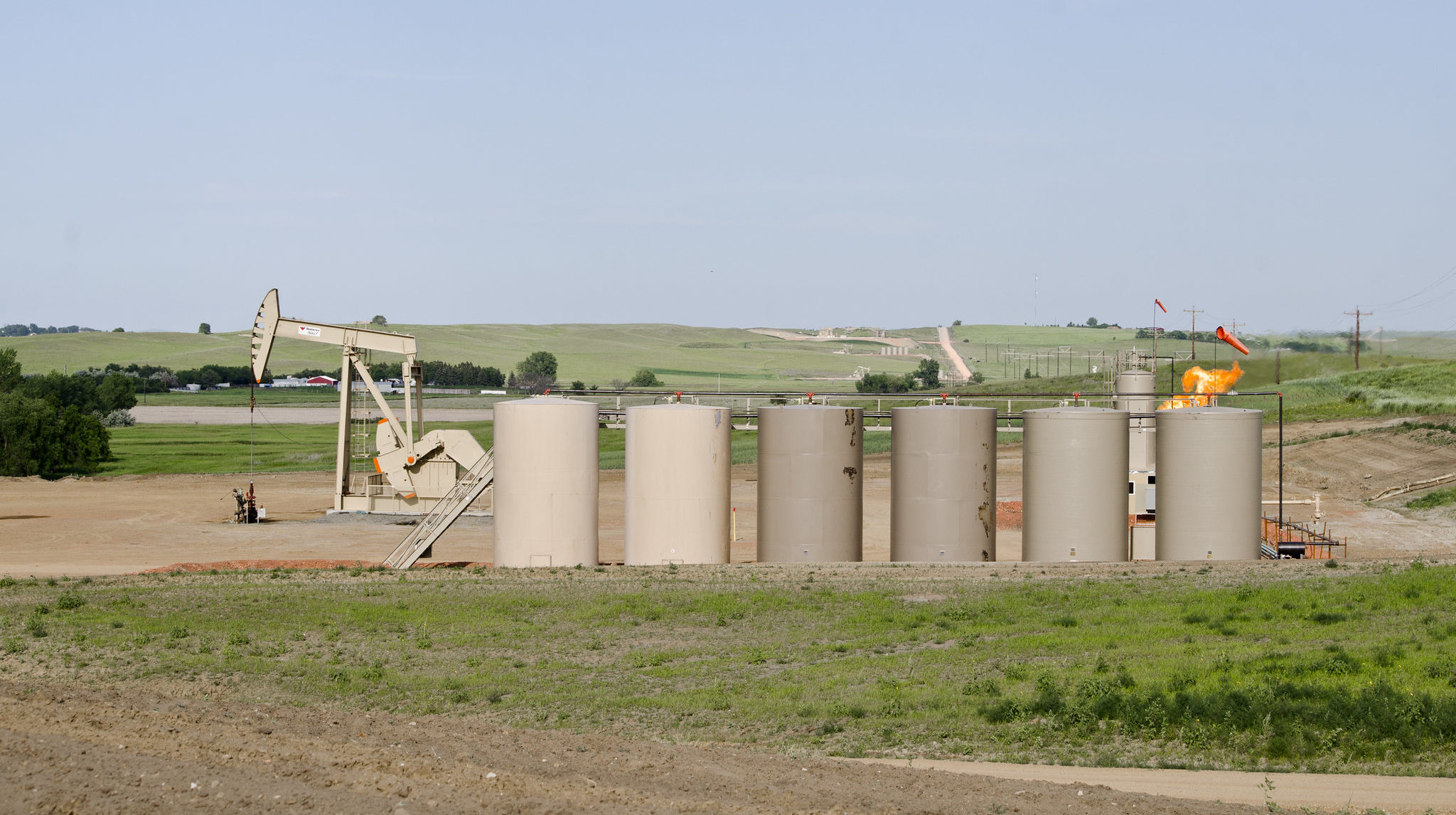 Members of the Fort Berthold Reservation have felt health effects from nearby fracking. (Tim Evanson/Flickr)
Support our journalism. Become a Patron!

The DeVilles live less than a mile away from facilities that produce, store, and transport natural gas. In August of 2017, she and her husband became ill with what she termed “debilitating respiratory infections.” She said they went to the McKenzie County Clinic, where a physician told them that they had the same symptoms as oil field workers treated at the clinic, known as the “Bakken Cough.”

She claims it took them eight weeks to recover, despite a steroid injection for him and a prescription of more medication for her. “We were miserable during those eight weeks, and we live in constant fear of the next devastating illness caused by exposure to heavily polluted air,” she told the Native Sun News Today.

Recently they learned of increased nosebleeds and illness at the Mandaree Public School where their children attend, so the Nov. 15 introduction in the U.S. Congress of the “SAFER Pipelines Act of 2019” provided them some cause for optimism.

The bill aims to reinstate a languishing 2016 EPA final rule that set limitations on methane emissions across the natural gas and hazardous liquid pipeline sector. A rollback to that rule had been slated, with comments having been due Nov. 25.

Concurring with the proposed legislation to counter the rollback, DeVille declared, “The EPA has a responsibility to defend the health and safety of American families like mine, and that means strengthening protections against methane pollution, not rolling them back.”

SAFER stands for “Safe, Accountable, Fair, and Environmentally Responsible” in the proposed law designed as “comprehensive” pipeline legislation to improve safety and address climate change “by reducing emissions, preventing pipeline leaks, and holding pipeline operators accountable for reckless actions,” according to its sponsors.

Joined by Rep. Bobby L. Rush and Rep. Dan Lipinski, (D-IL), they requested the U.S. Government Accountability Office (GAO) conduct an operator review of the entire Keystone Pipeline System as well as the agency that oversees it.

The leaking dilbit, some 383,000 gallons (9,000-barrels) of toxic material, caused a shutdown of the Keystone I Pipeline after discovery of the damage to wetlands Oct. 30, near Edinburg, located 75 miles northwest of Grand Forks, according to the North Dakota Department of Environmental Quality.

The “Edinburg Incident”, as TC Energy Corp. dubbed the mishap in Walsh County, is the third major spill from the pipeline in as many years — the twenty-first on the line since it opened in 2010.

After corrective action, the Pipeline Hazardous Materials Safety Administration, or PHMSA, allowed reopening of the flow valves Nov. 10, as crews continued to clean-up and investigate the cause.

“We will continue working until all the oil, which we continue to estimate at 9,120 barrels, has been removed and the site fully remediated,” the company promised, in thanking local first responders for their participation. The amount is comparable to the volume of a half-Olympic swimming pool.

Lawmakers responded with a written statement, saying, “The public has a legitimate expectation that the Keystone Pipeline System managed by TC Energy operate safely and without repeated incidents that damage the environment and threaten the public’s health and security.

“Yet we are faced with the third occurrence of a significant pipeline leak that has devastating impacts to the both the environment and nearby communities.”

“The frequency and severity of these incidents on the Keystone Pipeline System raises serious questions about both the integrity management program of TC Energy and whether adequate oversight and operating conditions have been put in place by PHMSA to ensure the safe operation of this high-pressure system.

“This is particularly concerning as TC Energy continues to pursue additional build-out of the Keystone Pipeline System with the Keystone XL Pipeline,” they wrote.

Their response followed upon a demand from Kendall Mackey, 350.org U.S. Campaigner for Keep It In The Ground, who said, “Disasters like these are among the many reasons we’ve been fighting the Keystone XL for almost a decade, watching as each new spill from Keystone I and other major pipelines render ecosystems unlivable for thousands of people.

“Not only must Keystone XL be stopped, but Congress must hold TC Energy accountable and demand that they pay for the care and repair needed for the devastating ecological destruction that communities are forced to endure. There is no such thing as a safe fossil fuel pipeline.”

The day of their request for the review, Nov. 18, was the deadline for public comment on the new Draft Supplemental Environmental Impact Statement (DSEIS) for TransCanada’s proposed Keystone XL Pipeline project across unceded 1868 Ft. Laramie Treaty in Montana, South Dakota and Nebraska.

The vast majority of the more than 330 commentators panned the project, chief among them the Yankton, Rosebud and Cheyenne River Sioux tribes, which have the company and federal government in court over the permitting process.

Dec. 17 is set as the first of a number of days to provide another public comment period at the South Dakota Water Management Board in Pierre, regarding surface and groundwater permits for KXL construction.