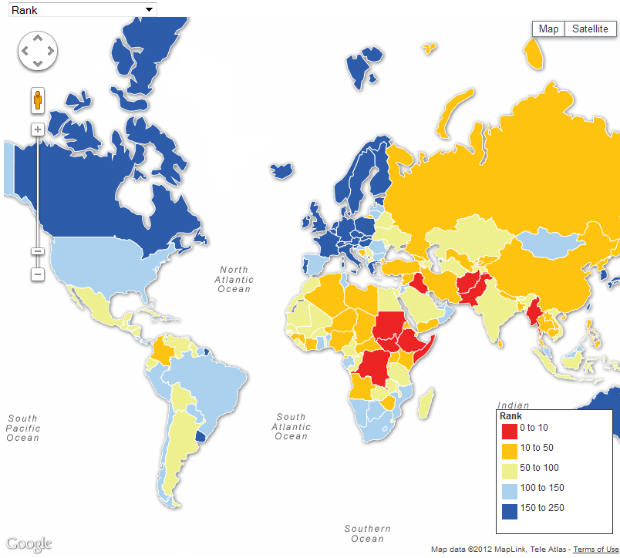 The Guardian has produced an interactive map based on the newly released “Peoples Under Threat” index from Minority Rights Group International (MRG).

Peoples Under Threat is an annual report that uses statistical data to identify situations around the world where communities are at risk of mass killing.

Almost all the significant episodes of civilian killing around the world that occurred in 2011 took place in countries which were near the top of, or major risers in, last year’s Peoples under Threat table.

This year, the index identifies more than 200 indigenous and minority populations in 70 countries. These include the Bantu, Benadiri and ‘caste’ groups in Somalia; the Hazara, Pashtun, Tajiks, Uzbeks, Turkmen and Baluchis in Afghanistan; the Kachin, Karenni, Karen, Mons, Rakhine, Rohingyas, Shan, Chin (Zomis) and Wa in Myanmar; the Hema and Lendu, Hutu, Luba, Lunda, Tutsi/Banyamulenge, Batwa/Bambuti and others in the Democratic Republic of Congo; the Madheshis (Terai), Dalits and linguistic minorities in Nepal; the Adzhars, Abkhazians and South Ossetians in Georgia; all indigenous peoples and Afro-descendants in Colombia; the Borana, Kalenjin, Kikuyu, Luyha, Luo, Muslims, Turkana, Endorois, Masai, Ogiek, others in Kenya; and the Tuareg in Mali.

It might surprise some, but, Venezuela was also listed in the index. Honduras, however, was not [which is a little curious given the repression and violence that the government has carried out there since the coup. In fact, there was a massacre in Honduras just two weeks ago].

In any event, Peoples Under Threat 2012 is eye opening.

The spreadsheet below includes all statistical data used to compile this year’s index. Please click here to view the spreadsheet in a full page.

Download the full Peoples under Threat index here and the briefing here.

Listen to an interview with MRG Executive Director Mark Lattimer on the 2012 Peoples under Threat rankings.