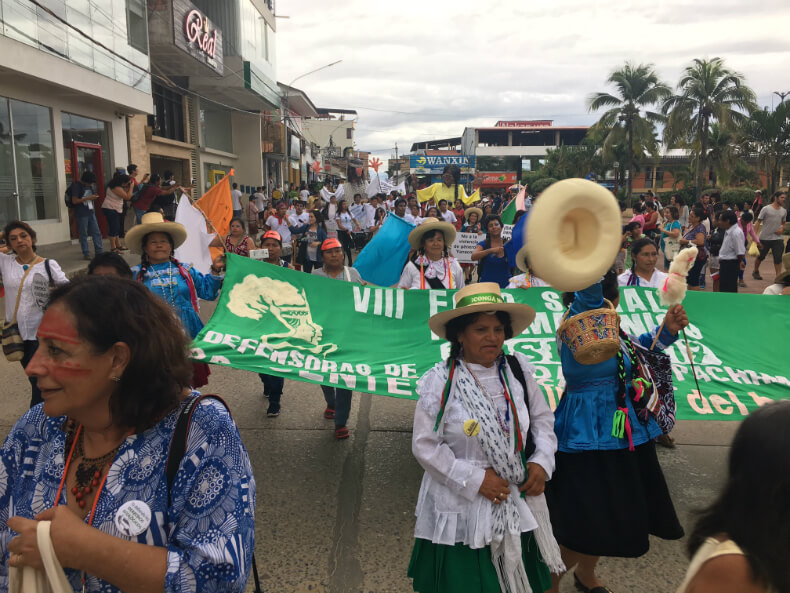 New Calls For Resistance Across the Amazon

Ever since European colonial powers started disputing borders on its rivers in the seventeenth century, the vast Amazon rainforest—known simply as Amazonia—has been under siege.

Amazon Peoples always resisted the colonial invasion, even after the borders were ultimately settled with the Amazon rainforest getting divided into the territories of nine states. They’ve had no choice. After all, the insatiable lust for ‘wealth at any cost’ did not lessen with time; the siege continued through the nineteenth century, in part with the rubber boom that gave way to the automobile boom.

The attack rages on even now, with the intensive push to extract everything the Amazon holds including oil, minerals, water, and land for agriculture and soy production.

Nations states are leading the land-grab, fostering environmental conflicts that kill nature defenders (most of them indigenous), displace communities, and destroy rivers for megaprojects. The organization Pastoral da Terra estimates that half a million people are directly affected by territorial conflicts in the Brazilian Amazon. About 90% of Brazilian land conflicts happen in Amazonia; 70% of murders in land conflicts take Amazon lives.

That is why people responded to “the call from the forest,” or “el llamado del bosque” in Spanish. This was the motto of the VIII Pan-Amazonian Social Forum, or Foro Social Pan Amazónico (FOSPA), that just gathered 1500 people in the town of Tarapoto, Peru. 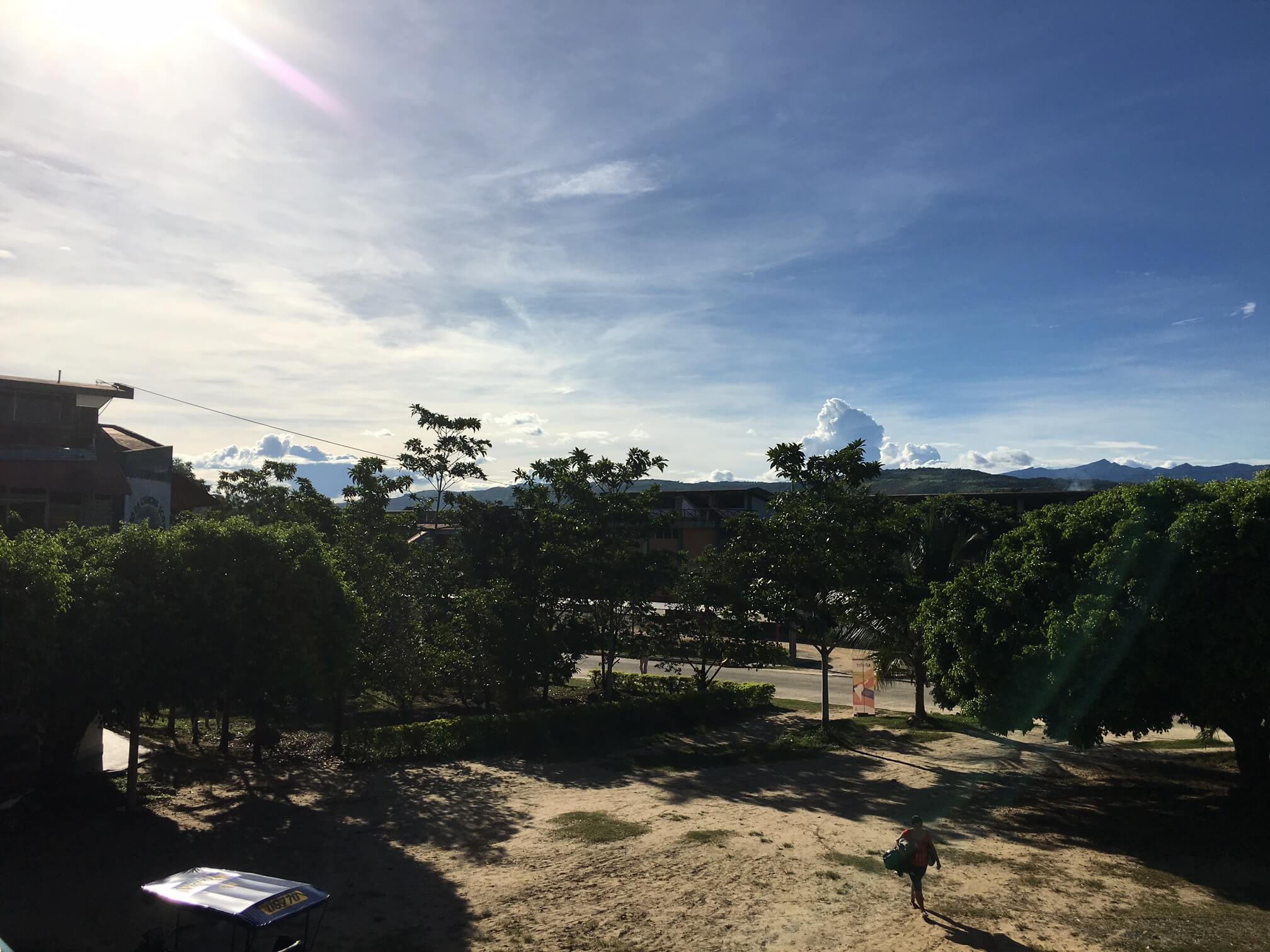 FOSPA is a regional chapter of the well-established World Social Forum. It is based on the same model that brings together social movements, associations and individuals to find alternatives to global capitalism. From April 28 to May 1, indigenous peoples, activists, and scholars from various parts of Amazonia got together in the campus of Universidad Nacional San Martin.

FOSPA is an important space, not only because the region is at the forefront of the climate crisis but also because it represents 40% of South America and spreads across nine countries—Brazil, Bolivia, Peru, Ecuador, Colombia, Venezuela, Guyana, Suriname, and French Guyana. The 370 indigenous nations in the region are an increasingly smaller part of a booming Amazon population that surpasses 33 million.

This VIII forum was well organized in an Amazon campus with comfortable work space and the shade of mango trees. In the absence of Wi-Fi, participants gathered around fruit juices and Amazon specialties baked in banana leaves at the food fair. The organizing committee, led by Romulo Torres, was most proud of creating the new model of pre-forum. For the first time, there were 11 pre-forums organized in 6 of the 9 Amazon countries to prepare the agendas.

The forum started with a celebratory march through Tarapoto. During three days, participants discussed the challenges of extractive development and land grab across the region. There was in total nine working groups organized around issues such as territoriality, megaprojects, climate change, food sovereignty, cities, education and communication. 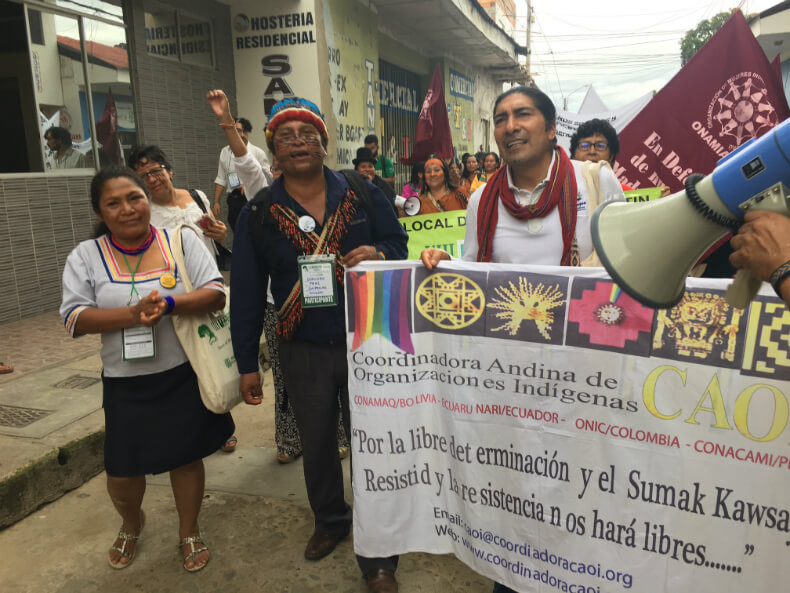 “Development is the problem”

Speakers strongly criticized models of development based on extractive industries. “Development is the problem, not the solution,” said Carlos Pérez Guartambel, from the Andean Network of Indigenous Organizations (CAOI) and the Confederation of Kichwa Peoples of Ecuador (ECUARUNARI).

Speakers blamed the political left for being equally invested as the right in extractive development, destroying life in the name of development. Toribia Lero Quishpe, from the CAOI and the Council of Ayllus Markas of the Quillasuyu (CONAMAQ) argued that this investment in capitalist gains corrupted the government of Evo Morales, who licensed over 500 rivers to multinational companies.

Gregorio Mirabal, from the Indigenous Network of the Amazon River Valley (COICA) and Venezuela’s Organization of Indigenous Peoples of the Amazon (ORPIA) denounced a massive land grab by the state in the Orinoco region. He said the government is licensing land to mining companies from China and Spain to promote “ecological mining.” Indigenous populations, in turn, have not had a single land title recognized in 18 years and are denied rights to prior consultation. 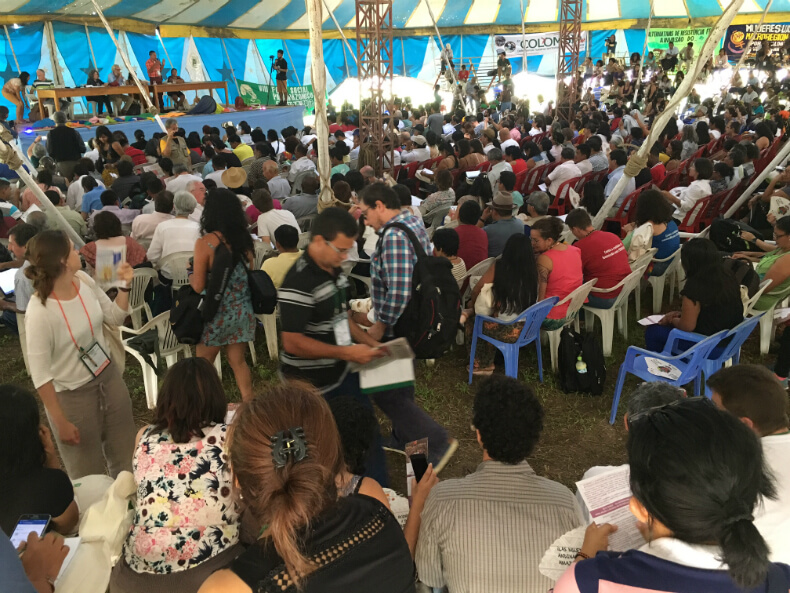 A working group discusses the decolonization of power and self-government in Peru. Photo: Manuela Picq

One of the working groups focused on the decolonization of power; French Guyana being the last standing colonial territory in South America.

Rafael Pindard headed a delegation from the Movement for Decolonization and Social Emancipation (MDES) to generate awareness about Amazon territories that remain under the colonial control of France.

Amazon forests constitute over 90% of French Guyana. Delegates described laws that forbid Indigenous Peoples to fish and hunt on their ancestral territories. They explained the mechanisms of forced assimilation—the French state refuses to recognize the existence of six Indigenous Peoples, claiming that in France there is only one people, the French. 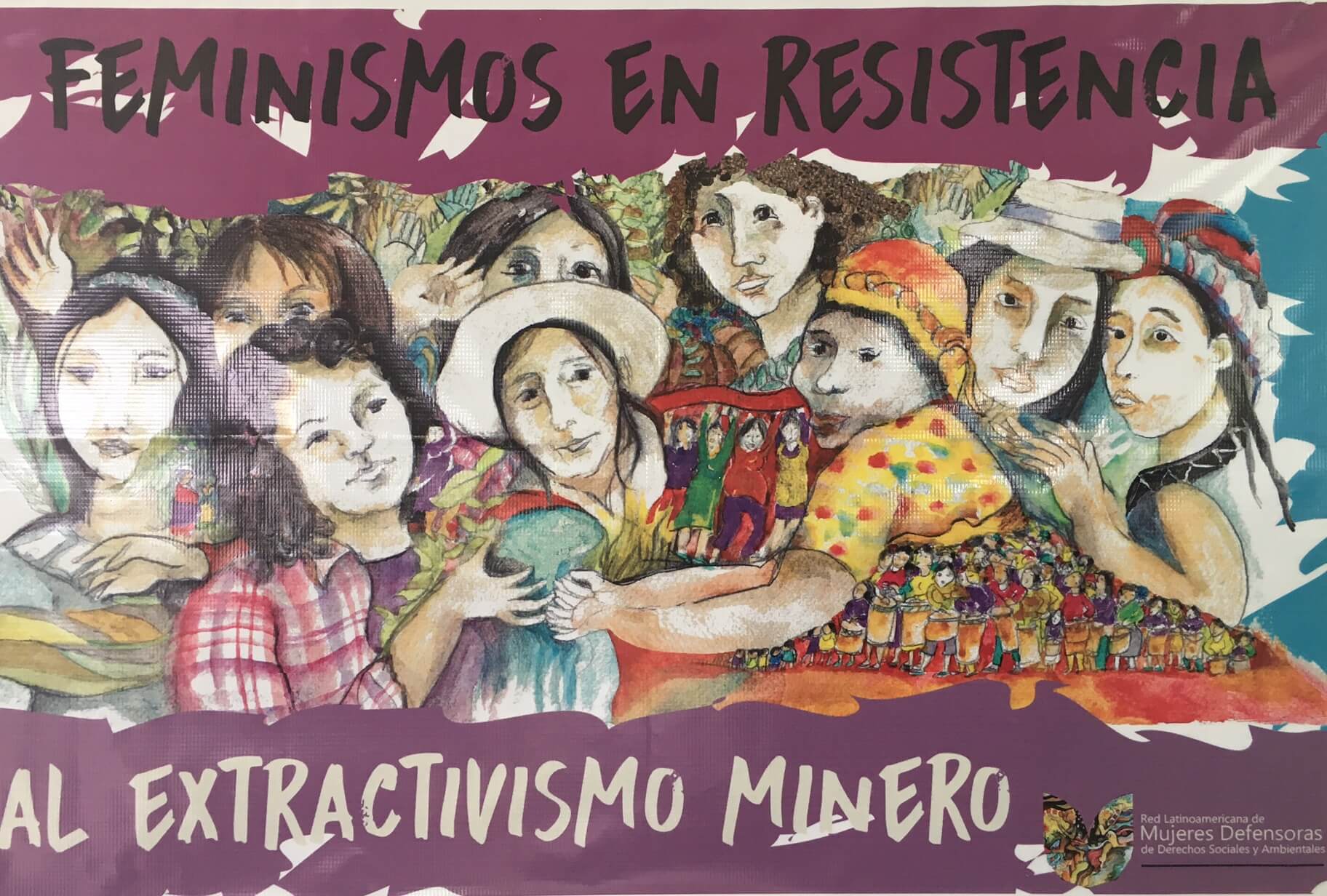 The forceful participation of women was one of the forum’s most inspiring aspects. Amazon women held a strong presence in the march, plenary sessions and held a special working group on women.

The highlight was the Tribunal for Justice in Defense of the Rights of Pan-Amazonian and Andean Women. Four judges convened at the end of each day to listen to specific cases of women defenders. They heard individual as well as collective cases. Peruvian delegates presented the case of Maxima Acuña, a water defender from the Andean highlands of Cajamarca who faces death threats. Brazilian representatives from Altamira presented the case of the Movement Xingu Vivo para Sempre, which organizes resistance against the Belo Monte Dam.

The Women’s Tribunal also heard cases from across the continent. Liliam Lopez, from the Confederation of Indigenous Peoples of Honduras (COPINH), presented the emblematic case of Berta Cáceres, assassinated in 2016 for leading the resistance in defense of rivers. Delegates from Chile presented the case of Lorenza Cayuhan, a Mapuche political prisoner jailed in Arauca for defending territory and forced to give birth handcuffed.

Many working groups called for a paradigm shift to move away from economic approaches that treat nature as a resource. Participants defended indigenous notions of living well, or vivir bien in Spanish.

There were many initiatives presented throughout the gathering. The working group on food sovereignty proposed to recover native produce and exchange seeds, for instance, through seed banks. 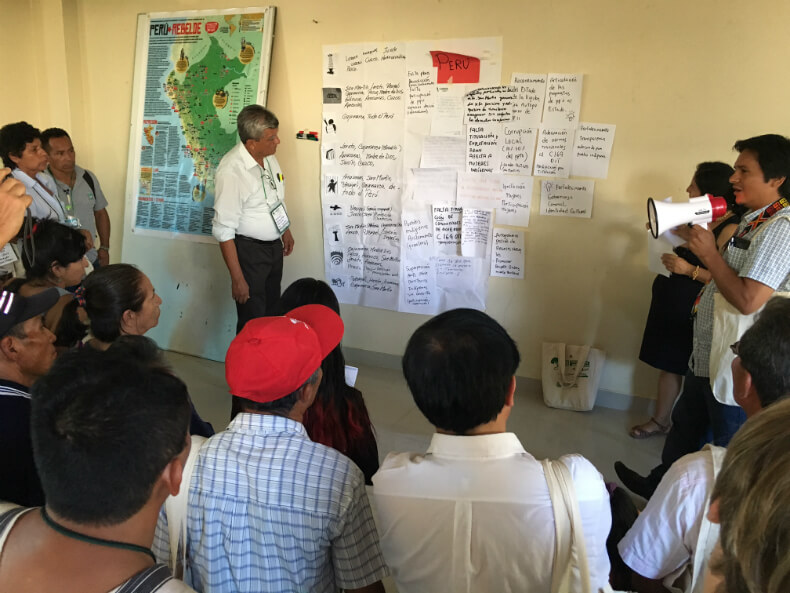 The final proposals of all working groups hang in the main tent allowing participants to add suggestions before the elaboration of the final document. Photo: Manuela Picq

Delegates from the Confederation of Indigenous Nationalities of the Ecuadorian Amazon (CONFENIAE) and the organization Terra Mater presented a collaborative project to protect 60 million acres of the mighty Amazon River’s headwaters – the Napo, Pastaza, and Marañon River watersheds in Ecuador and Peru. The Sacred Headwaters project seeks to ban all forms of extractive industries in the watershed and secure legal titles to indigenous territories.

Wrays Pérez, President of the Autonomous Territorial Government of the Wampís Nation (GTAN Wampís) explained practices of indigenous autonomy. The Wampís, who have governed their territories for seven thousand years, have successfully preserved over a million hectares of forests and rivers in Santiago and Morona, Peru. The Wampís Nation designed its own legal statute based on Peruvian and international law, including those protecting the collective rights of Indigenous Peoples. 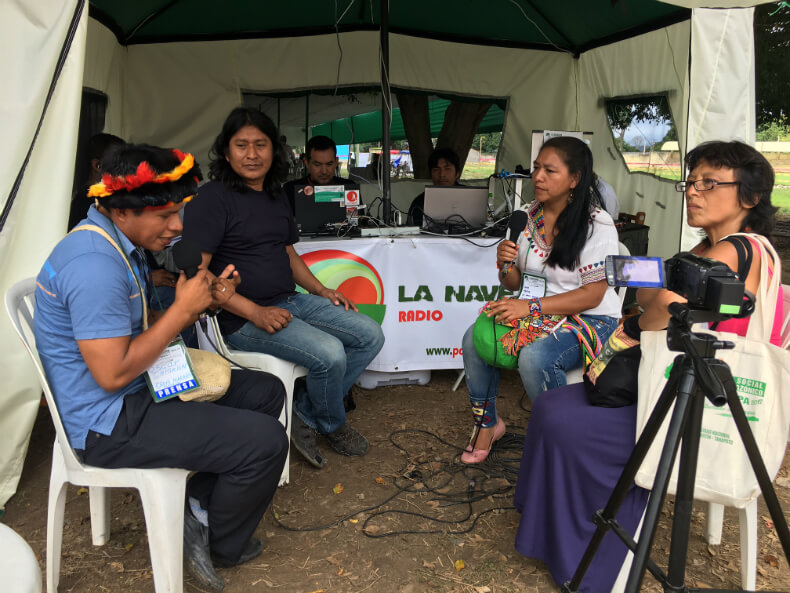 Many venues emphasized the importance of Amazon communication. All workshops and plenary sessions were transmitted live through FOSPATV and remain available on FOSPA’s webpage. 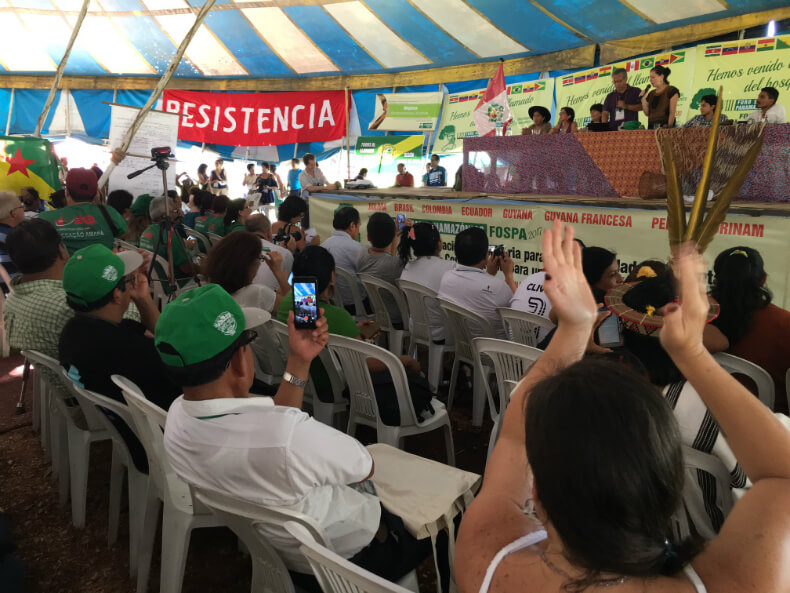 A plenary assembly announces the final Declaration of Tarapoto, May 1 2017. Photo: Manuela Picq

The forum closed with the Carta de Tarapoto, a declaration in defense of life containing 24 proposals. The declaration collected the key demands of all working groups. It demands that states respect international indigenous rights and recognize integral territories. It invites communities to fight pervasive corruption attached to megaprojects and suggests communal monitoring to stop land-grabbing.

The declaration stresses the shared concerns and alliances of Amazonian and Andean peoples, explicitly recognizing how the two regions are interrelated and interdependent. It denounces state alliances with mining, oil, and hydroprojects. It defines extractive megaprojects as global capitalism and a racist civilizing project.

It echoes FOSPA’s intergenerational dimension, celebrating elders as a source of historical knowledge to guide the preservation of Amazon lifeways. Youth groups, who had their own working group, demanded that states recognize the rights of nature.

Women concerns are the focus of four points. In addition to making the Women’s Tribunal a permanent feature of FOSPA, the declaration calls for the end of all forms of violence against women and the recognition of women’s invisible labor. It asks for governments to detach from religious norms to follow international women rights.

In closing, the declaration expresses solidarity with peoples who live in situation of conflict, whose territories are invaded, and who are criminalized for defending the rights of nature.

It is in that spirit that the organizing committee decided to hold the next FOSPA in Colombia. Defenders of life are killed weekly despite the peace process, revealing a political process tightly embedded in the licensing of territories to extractive industries like gold mining.

The Colombian Amazon is calling. May it be a powerful wakeup call across and beyond the Amazons.