The company’s Commitment on Land & Land Rights was as clear as day. As of July 2014, Nestlé would “engage with and seek the support of those who could be affected by investment decisions,” they would “seek free, prior, and informed consent with regard to the rights of Indigenous Peoples”, and they would ensure respect for land rights in relation to land acquisitions.

“Nestlé is against all forms of land acquisitions that are illegal and/or have an adverse impact on local communities’ livelihoods (land grabs)”, the company states. “It is committed to develop its business in a way that complies with national laws and respects human rights, and particularly the customary rights to land and natural resources of Indigenous Peoples, traditional peoples, and communities that are impacted or potentially impacted by the company’s business activities.”

On paper, Nestlé’s commitment stands as a rare recognition of indigenous rights and a welcomed departure from countless other transnational corporations that continue to thrive on the theft of indigenous lands and rivers, and the commodification of nature. But if the company practices what it preaches, it needs to get out of Guaraní lands and waters.

The Guarani Aquifer is the largest underground aquifer in the world and the third largest underground water reserve in the world. The Aquifer, named after the Guarani Peoples, lies underneath a huge region of land that stretches across Brazil, Paraguay, Uruguay and Argentina. It is estimated to hold enough water to last humanity 200 years, making it a valuable monetary asset to all four nation states. 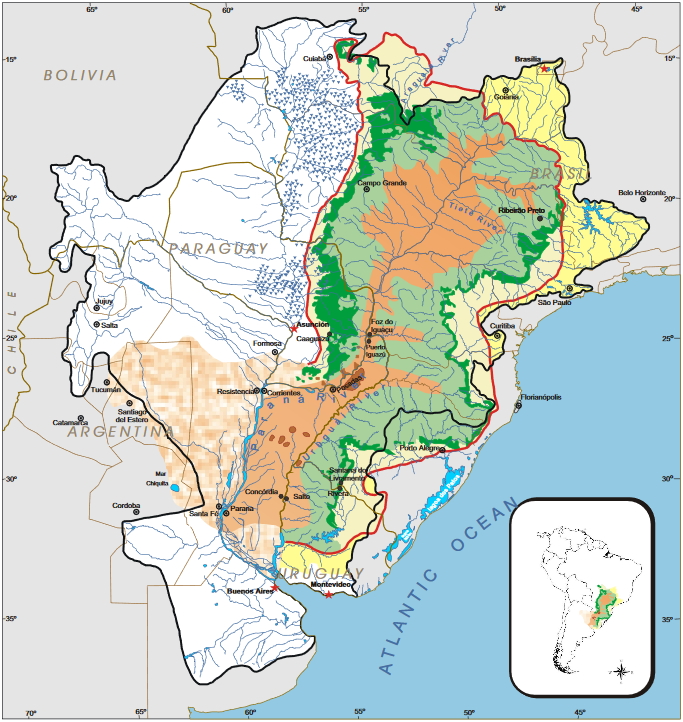 The massive grab of Guarani lands

Almost all Guarani Peoples live in Central and Southern Brazil, with a few thousand scattered throughout Paraguay and Argentina. They once had a population of 400,000. Now, that number has dwindled to just over 50,000 individuals. Being Guarani today means surviving murders and constant forced displacement by ranchers with the support of the Brazilian government.

The story of Marcos Veron is a case in point. When Veron attempted to return home in 2003, he was beaten to death by militias hired by the rancher who appropriated his land. His assassins, charged with the murders of six other Guarani, were never convicted for their crimes. Veron is no exception. Thousands of other Guarani Indians have been killed or evicted over the years. Cattle ranchers have left entire Guarani communities homeless, stranded and prey to extreme poverty. The consequences are a high mortality rate of children under five, and a suicide rate among the Guarani that is 34 times higher than the Brazilian average.

Guarani authorities continue to be murdered. In 2015, Semião Vilhalva was shot dead for trying to take back Guarani ancestral lands in the state of Mato Grosso do Sul. Survival International reported that the murder took place in the presence of agents of the Brazilian government.

Ancestral Guarani lands, which lay on top of the Guarani aquifer, are now occupied by ranchers, and since Brazil is one of the world’s top producers of beef, Brazilian courts continue to side with the ranchers in land disputes. But cattle ranchers are no longer the sole predators of Guarani lands.

Indeed, the acquisition of the Guarani Aquifer is no moral option, as Nestlé contends.

The company is actively competing with other transnational corporations to control the water rights over the Guarani Aquifer.

In order to control those water rights, Nestlé must first take over lands above the aquifer.

Although the land is currently used for farming, the company is actively pursuing negotiations with the government to gain control of any land the government is willing to put on the table.

According to the Brazilian newspaper Correio do Brasil, “Representatives of [Nestlé and Coca-Cola] have held meetings with government authorities to formulate procedures for exploitation by private companies of water sources, especially in the Guarani Aquifer, in concession contracts for over 100 years – [the senior official] added.”

Nestlé’s competition with Coca-Cola for rights to the aquifer is violating its sustainability policy.

The company is openly trying to capitalize on the government’s refusal to respect the Guarani’s land rights. In so doing, the food and beverage giant has effectively joined the ranks of the violent ranchers and police forces displacing the Guarani from their lands and weakening their physical, cultural and economic health and security for all generations to come.

A corporate façade to land-grab

In Nestlé is treating its corporate social responsibility promise as a façade to continue land-grabbing as usual.

And what’s more, by negotiatiating with the Brazilian government, Nestlé is paving the way for a new form of dispossession that seeks to empty lands of the Indigenous presence to make them terra nullius, and thus “available” to ownership and exploitation.

This brand of dispossession is type of slow violence that would not be possible under Nestlé’s zero-tolerance policy.

Memory is an important tool against the growing invisibility of indigenous dispossession. Indigenous histories must be defended so that territories are not erased. The murders of the Guarani victims killed for defending their lands, like Marcos Veron and Semião Vilhalva, need to be told and retold until the perpetrators are brought to justice.

For generations, Indigenous Peoples have been defending water and nature at the cost of losing their lives. The rest of society must hold governments and corporations accountable, to denounce the impunity of crimes against Indigenous Peoples as a key mechanism to private accumulation.

This is, perhaps, corporate social responsibility as it should be.

Moments before he died, Veron perfectly encapsulated the importance of the land to the Guarani Peoples. “This land here is my life, my soul. If you take me away from this land, you take my life.” To the Guarani, their ancestor’s land on top of the aquifer is much more than just an opportunity for profit. It is time we all see land as a source of life.

Luke Nguyen, from Old Lyme, Connecticut, studies Political Science at Amherst College, Masachusetts, and is a passionate scholar of Brazil.