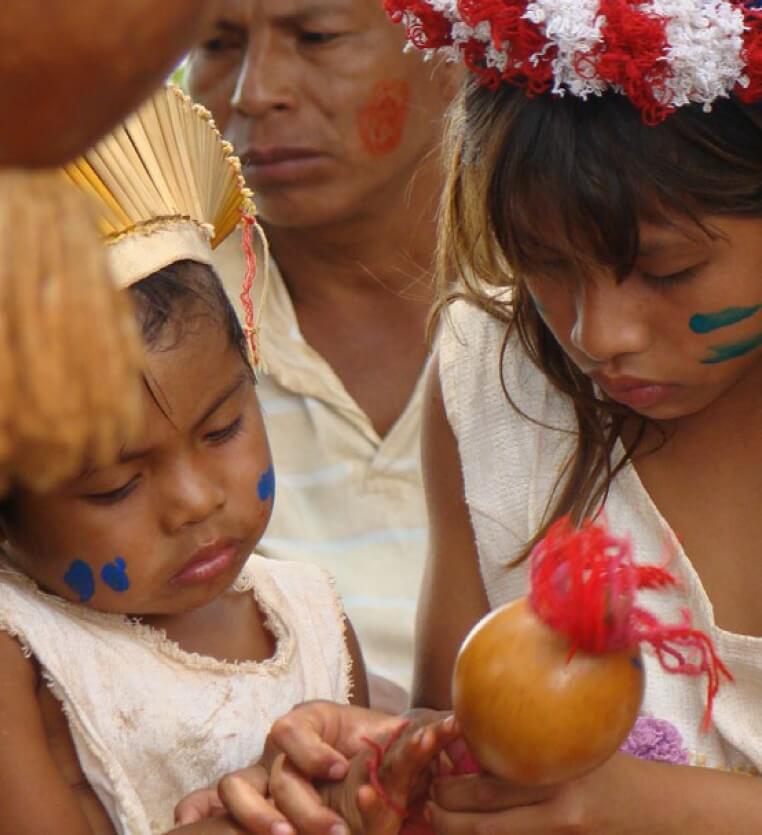 The Negation of Rights in Mato Grosso Do Sul: A Look at the Reality

Demarcation of Indigenous Lands as Fundamental for Overcoming Injustices
Support our journalism. Become a Patron!

Ample access to information about the reality of the indigenous peoples in Mato Grosso do Sul has become an element that’s fundamental to the process of reversing a dramatic picture of systematic injustices.

The demand for demarcation of the indigenous lands in this state and the repercussions in the ongoing situation of the communities is increasingly reported in the regional, national and international press.

In Mato Grosso do Sul–the second largest indigenous population in Brazil–is found with worst instances of demarcated lands and with the highest rate of human rights violations as a result of the systematic omission of the public powers of the government in complying with and respecting the determinations stipulated in Article 231 of the Federal Constitution of 1988 and international treaties that Brasil has subscribed to.

Indigenous Peoples are confined to extremely small areas, such as Terra Indigena of Dourados where approximately 14 thousand indigenous persons (Guarani, Kaiowá and Terena) live on 3,600 hectares of land, a confinement that results in serious problems linked to violence, sustainability and social organization.

As pointed out in the Annual CIMI Report on Violence, Mato Grosso do Sul has been for many years the “record holder” in violence against the indigenous peoples in Brazil; the cause of this reality is intimately linked to the lack of their traditional lands. Lands that for these peoples are sacred, an ethnic heritage in whose spatial dimensions translate ways of living and of organizing that are different from that of the surrounding society.

These are areas where the exercise of possession of the land does not correspond to the logic of capitalist production, to be utilized as a mere market instrument, but rather where they verify cultural meanings in the usufruct of its resources, as well as in the dynamics of social organization, permanence and transit of its inhabitants and their relations of power, being the necessity of preservation of the existing biodiversity and the recomposition of those areas deforested. Finally, they are places where they reproduce linguistic diversity and traditional knowledge.

Given the history of the recent colonization of the state, the lands traditionally occupied by the Kaiowá-Guarani and Terena peoples, and that are today being claimed for demarcation in the state of Mato Grosso do Sul, are being given to a broad apparatus of large scale exploitation for livestock and monoculture, and the agribusiness frontiers increasingly advance over the constitutional rights of the indigenous peoples and over the natural resources of the region’s biomass.

We are thus reminded that it is an aggravated conflict of interests, which are ultimately permeating political disputes in the Brazilian state, which have throughout history demonstrated flagrant political and administrative inoperability in resolving land tenure problems that affect the indigenous communities in Mato Grosso do Sul.

In this scenario, the indigenous peoples are always those who are most injured when they attempt to face the daily challenges of survival struggling fiercely for the demarcation of their traditional lands, in an obvious asymmetry and faced with a political and economic system that chose to privilege a “development” project founded, to the detriment of hundreds of families, on difficult embittering days in overcrowded villages and the more than 32 encampments at the edges of the highways.

In very close coexistence with non-indigenous society, difficult negotiations are engaged on a daily basis by the indigenous peoples seeking better conditions of life and of sustainability.

Recurrent situations of discrimination and racism are molded in different ways – from the old stereotypes still deeply embedded in society, to more explicit aggressions from organized sectors opposed to the territorial rights of the indigenous peoples. Campaigns of “disinformation” are rampant, with proposals to prevent the demarcation of indigenous lands. All of these, with the political support of the state “machine” and its agents and with the contribution of the regional press.

The “view” of the indigenous peoples is dislocated, and these peoples are seen by the surrounding society as an impediment to “development”.

With a very youthful population, uncertainty about future generations hovers over the indigenous communities.

According to information from the Ministério Público Federal of Mato Grosso do Sul, the homicide index for the villages of Dourados/MS (Jaguapirú and Bororó with 3,600 hectares and 14,000 persons) is 145 murders for every 100,000 inhabitants; while, for example, in Iraq at the height of the war, the number was 93 murders for every 100,000 inhabitants.

The index of homicides in the villages of Dourados is 590% higher than the national average of 24.5 homicides per group of 100,000 inhabitants.

When the indigenous peoples are accused of crimes, the police apparatus is quick to criminalize these individuals, significantly increasing the population of indigenous persons arrested, Mato Grosso do Sul being the state of the Federation with the largest incarcerated indigenous population in the country, according to a study conducted by Universidade Católica Dom Bosco.

In contrast, when indigenous persons are assaulted or murdered by non-indigenous assailants, the majority of death cases being in the context of the struggle for land, there has been an agonizing morosity of the agencies in the conduct and completion of inquiries and criminal actions.

Judicialization of the demarcations

By the end of 2013 more than 183 judicial processes were filed in court involving land disputes and demarcation of the indigenous areas. By the end of April of 2013, there were 87 suits in appeal in the Federal Regional Court of the 3rd Region and approximately 56 cases filed in the first Federal Court jurisdiction in the State of Mato Grosso do Sul.

Analyzing the administrative regulations for demarcation stipulated by Decree 1.775/96, covering the published reports of identification, declaratory orders or approvals of these lands, in nearly all cases there subsequently arise judicial decisions favorable to plantation owners and their organizations, suspending the effects of administrative acts of the Federal Executive branch.

At the moment there are 57 tekohá guarani waiting for identification. Of 39 of these the identification and demarcation were agreed upon by FUNAI and the MPF in a judicial agreement (Administrative Procedure MPF/RPM/DRS/ MS1.21.001.000065/2007-44) signed on November 12th, 2007. However, none of the deadlines established in the agreement were kept. Funai should have registered with the Justice Ministry these 39 areas by April, 19th, 2010. However, only one area has had its ruling published.

This is without counting the cases of the Guarani-Kaiowa end Terena, who without legal decisions suspending the procedures, are the object of an immense inertia on the part of the federal executive branch which has not complied with the deadlines stipulated in the Decree 1.775./96.

Thus, the lack of political willingness of the governments to comply with Brazilian indigenous legislation results in protracted paralysis of everything for years without any prospect in the short and medium term for definitive judgments.

The current conditions reveal the urgent necessity that the proceedings for identification of the lands of the Kaiowá and Guarani people take place once and for all. The question is, how much longer must the indigenous people endure the delay, the omission, and the unfulfilled promises about the definition of the boundaries of their claimed lands?

Meanwhile, the sectors opposed to the demarcations continue to promote discord and lies in relation to the identification procedures, which the federal court has already found to be valid and legal. Time passes, and the entire surrounding society is plunged into a sea of conflicts, indecision and animosities, where everyone is injured, indigenous and non-indigenous alike. The identification of all the lands of the Guarani and Kaiowá people will put an end to the uncertainties and bring greater hope for a better future for a people whose resistance does not tire.

The indigenous movement and hope

Even with the total neglect of the State in resolving their territorial problems and their conditions lacking food and social sustainability, the indigenous peoples of Mato Grosso do Sul have become increasingly organized in the struggle for their rights. The search for a better comprehension of their difficulties and the creation of unified efforts causes the indigenous movement to produce increasingly permanent forums of reflection and articulation, developing an important political role that translates their concerns and that enables a greater indigenous activism engaging with the Brazilian government.

The indigenous assemblies make possible the expression of reflections among the various leaders and their communities, where their claims take shape and the solidarity in diversity of the different groups still experiencing the same problems, bring vitality to the quotidian experience of daily struggles, in the hope of better days. The exchange of information is major, and the support of organizations in defense of human rights and those of the social movements have been relevant to the confrontation of the problems.

It is conceivable that the struggles and the claims for territorial demarcation of the Kaiowá Guarani and Terena peoples will never cease. The voice of the indigenous peoples will be increasingly amplified to the surrounding society and to the Brazilian State, nurturing the hope for victories and of peace ultimately in solidarity and communion, in a society that respects the existing ethnic and cultural diversity.