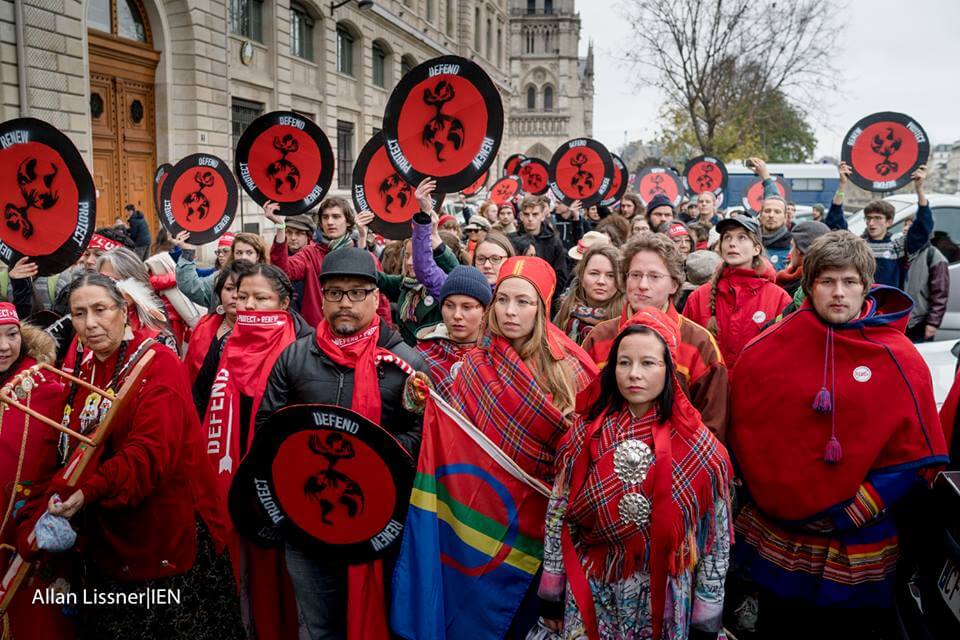 Why We Need Intersectionality to Understand Climate Change

A group of Indigenous and non-indigenous activists at COP21 in Paris. Photo: Allan Lissner / IEN
Support our journalism. Become a Patron!

In this article, Elizabeth Walsh exposes a few of the core challenges that Indigenous Peoples face both inside and outside the international climate change debates. By examining theories of civil society and intersectionality, the article provides useful insight into an adjoining three-part interview with prominent Native American activist and Indigenous Environmental Network Executive Director, Tom Goldtooth. Through this interview, Goldtooth explains in detail the ways in which Indigenous Peoples have been deliberately kept out of the debate.

In 1992, nation states around the world signed an international treaty known as the United Nations Framework Convention on Climate Change (UNFCCC) to begin addressing the problem of climate change. Since 1995, parties to the convention have met annually in Conferences of the Parties (COP) to assess and strategize around the issue.

The UNFCCC is generally understood to be more open to NGO participation than most other international issues, however, as Caniglia, Brulle and Szasz, observe in Climate Change and Society: Sociological Perspectives, a hierarchy within climate change’s civil society nonetheless persists. The authors refer to Peter Newell’s classification, a table of which has been reproduced here (emphases added):

As the table demonstrates, indigenous activists (as well as indigenous organizations, governments, and their representatives) are categorized as “Outside-Outsiders.” Beyond a label that indicates their marginalization, the table reveals broader implications for the type of access that Indigenous Peoples have to the negotiations. Compare this to “Inside-Insiders,” who not only get access to and support from delegations, but they are also granted an ability to directly influence the negotiations, and form collaborative relationships with governments and the private sector. “Inside-Outsiders,” meanwhile, are able to make ample use of the media and can reasonably expect some response from international and regional institutions. These are the partnerships that allow civil society to exercise power in the public sphere, and for “Outside-Outsiders,” they are unavailable. Moreover, as Caniglia et al point out, the structure of international conferences is biased to favor northern, industrialized norms.

In order to understand the repercussions of this outsider squared status, we ought to turn to intersectionality theory and deliberative politics. In Women’s Rights in Democratizing States: Just Debate and Gender Justice in the Public Sphere, Denise Walsh uses a definition of civil society that is limited to social movements, organizations and associations that are engaged in public debate, with an emphasis on public debate. Thus, those areas of civil society that provide opportunities for debate are most important. As Neera Chandhoke argues, “global civil society actors engage in practices that can possibly reshape the ‘architecture’ of international politics by denying the primacy of states or of their sovereign rights.” To put the two together: public debate can subvert, to an extent, states’ monopolies on international policy. But Indigenous Peoples have limited access to civil society due to the very nature by which it is constructed.

This is where intersectionality comes into play. Intersectionality is a concept from feminist theory that “treats social positions as relational, and it makes visible the multiple positioning that constitutes everyday life and the power relations that are central to it.” It is about “the complex, irreducible, varied, and variable effects which ensue when multiple axes of differentiation – economic, political, cultural, psychic, subjective and experimental – intersect in historically specific contexts” (Dhamoon quoting Brah and Phoenix, 231). Thus, “where the roads intersect, there is a double, triple, multiple, and many-layered blanket of oppression.” Dhamoon goes on to cite Foucault, explaining that ultimately the focus of analysis is about “techniques of power” (Dhamoon 231).

Therefore, we need to think of Indigenous Peoples’ relationship to the climate change agenda in terms of multiple outsider statuses: collective versus individual rights, minority versus majority, ethnicity, race, class, regional location, rural versus urban, etc. I would like to push this even further and emphasize that the outsider status to which Indigenous Peoples and civil society actors are relegated within international policy-making creates yet another piece of the intersectionality puzzle, contributing to a complex and multi-layered system of oppression. To return then to Chandhoke, the question is how these multiple systems of oppression prevent Indigenous Peoples from engaging in practices to reshape the architecture of international politics. Or, to draw on Walsh’s theory, in what ways are Indigenous Peoples refused the opportunity to participate in public debate?

The way in which we conceptualize the climate change debate reinforces the dominance of both the state and the market: it ensures that we continue to think of power inequalities in terms of national boundaries, and it defines these inequalities in terms of economics; at COP21, the main concern with regards to inequality usually had to do with the division of “developed” versus “developing” countries. Which countries will be allowed to emit? Which ones must reduce? These are primarily market-driven questions that reinforce a system that is categorized on the basis of capitalism and nationhood. Because climate change is discussed in terms of state responsibility and market effects, this international relations rhetoric sustains both the state and the market as the two most powerful and important avenues for change and accountability. And as discussed, the most open channel for Indigenous Peoples to secure change at national, regional, and international levels is through civil society – which is distinct from both state and market.

This is less of a problem for other interest groups that use civil society as only one avenue to advance their agendas; some of their other needs may in fact be met by the state or the market. For example, someone who pushes for radical environmental politics through an Outside-Outsider NGO receives human rights guarantees from her state in other areas. Yet for Indigenous Peoples, this is infrequently, if ever, the case; their rights in all areas are tied to climate change policy. There was no nation to advance the indigenous agenda at COP21. There was no private corporation to ensure that their economic interests were safeguarded, and capitalism is one of the primary causes of poverty for indigenous populations. When we understand these dynamics from the perspective of intersectionality, it makes more sense to insist that all participants in the climate change debate are aware of these forces. Policymakers who decide the future of climate change are not only making decisions with economic and environmental repercussions, but also with human rights outcomes for some 5000 distinct societies in 90 countries around the world. The recourses for managing the interests of indigenous nations and peoples are fewer and more challenging given the nature of a system that is biased to respond to nation-states and the free market. As a result, the stakes at the international level for these groups are much higher than policy makers, scientists, and other actors either recognize or are willing to admit.

How do we address this problem of compounding inequality? At the very least, Indigenous Peoples’ obstacles should be formally recognized and given priority so that they are not always kept within the margin as “Outside-Outsider” members of civil society. Countries must adopt and legislate the United Nations Declaration on the Rights of Indigenous Peoples (UNDRIP) and actively refer to it in future COP documents and negotiations. On May 10, 2016, Canada formally adopted the declaration, bringing an end to years of official opposition. This, combined with Canada’s renewed and powerful commitment to climate change should provide a precedent for other countries such as the United States, Australia and New Zealand to do the same.

Finally, instead of thinking of climate change inequality in terms of north-south, we need to instead “examine the processes of globalization that have produced groups in different places all over the world with unequal access to political, economic or social resources.” This means re-examining the processes of the climate change debate at the international and regional levels, which I explore in my interview with Tom Goldtooth. Actors are no strangers to needing to revise the process; failures at previous COPs have necessitated this, and I would contend that COP21 was a failure in this regard, the effects of which will be realized in years to come unless change comes to the climate change regime. The system needs to adjust accordingly. Because Indigenous Peoples are uniquely placed in society, experiencing a range of overlapping inequalities, they are in fact great advocates to combat climate change not only in terms of their traditional knowledge and propensity towards conservation, but also because of their unique political status. When our system treats a large sector of society that holds 65% of the Earth’s land area as Outside-Outsiders, it is the system that must change.